Tammie has taught elementary school for 14 yrs. and holds an MA in Instructional Technology

Explore the job description and duties of a state governor. Discover how one becomes a governor and their responsibility to create state budgets, recommend legislation, veto bills, and command the state's National Guard. Updated: 01/05/2022
Create an account

Every organization needs a leader. A ship needs a captain. A school needs a principal. A team needs a coach. You could probably come up with many more examples yourself. Take a state, for instance. We have fifty states in the United States of America, and each state has a multitude of people that work within its government. But, just like the team players need a coach, all of those state workers need a leader, and that is where a governor steps in! The governor is also known as the head of the state or the chief executive officer. A governor is a state's ultimate decision maker, and with that comes great responsibility! 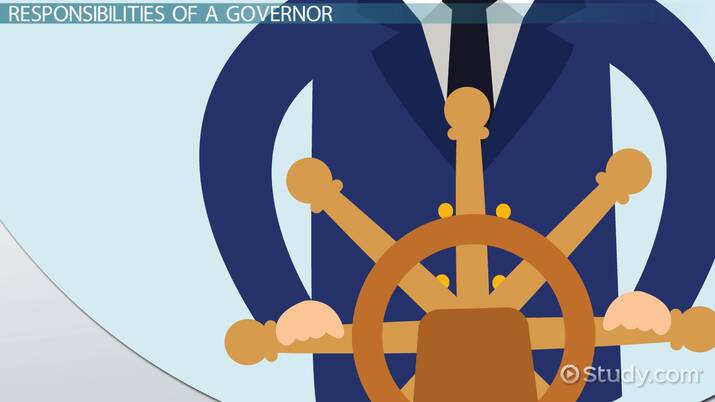 Coming up next: Local Government Lesson for Kids

Each state has its own constitution, or written document that details how a state's government will be run. Within that document are the rules for who can become the state's governor, how long the term or service of governorship will be, and how many terms they can serve. Although different states disagree on several things regarding the position of governor, all states agree on two things: there can only be one governor at a time, and he or she must be elected by the people.

If you do become governor, depending on your state, you can serve anywhere from a two-year term to a four-year term. Once your term ends, you can run for reelection and try to be voted in again, unless you live in Virginia, where you have to leave office for four years before you can run again. If you don't like that idea, then run for governor in a state like Texas, where you can run for as many terms as your heart desires!

Responsibilities of a Governor

First, governors set policy and appoint people to work with them. This allows the governor to have great control over the direction of the government and get his or her ideas moving.

Second, governors are in charge of creating a budget for the state. They decide what items the state government spends money on and how much. However, they don't have all the money power. Governors do seek wisdom and help when creating their budgets, and the budget has to be approved by other lawmakers in the state.

Third, the governor can recommend new legislation, or laws, and can also sign bills into law. Governors even have the power to veto bills or, in other words, reject proposed laws.

Finally, a governor is the commander-in-chief of the state's National Guard. This means that, if the need arises, the governor can put the state's military into action.

The governor is the state's leader. A state's constitution sets the rules for who can become governor, the term length, and how many terms can be served. A governor has many responsibilities, such as setting policy, picking state leaders, setting the budget, recommending and signing legislation, and running the state's National Guard.

Roles, Duties & Responsibilities of the U.S. President: Lesson for Kids