Each state legislature in America has responsibility of drafting, creating, and implementing their own state laws. Explore the definition and overview of state legislature and three examples of different states and their size, structure, and procedures. Updated: 09/11/2021
Create an account

Governing such a huge country with such a diverse population as the United States can be tricky. If the federal government in Washington D.C. tried to micromanage the affairs of each state and local government, there would be no time left to tackle bigger, important issues; and worse, many local interests would surely get lost in the melee.

Fortunately, many of these localized issues are not dealt with in Washington but in each state's own government. An integral part to each state government - indeed where the people of each state are best represented - is the state legislature.

The state legislature usually makes up one of the three branches of state government, and both checks and is checked by executive and judicial bodies. The primary responsibility of any state legislature is to design, draft, and vote on bills and laws to govern each state. Bills and laws generally go through several committees prior to being voted on in the entire assembly, through which the bills and laws are changed, amended, or killed altogether. Most representatives are members of committees devoted to certain issues or important interests, such as energy, education, or administering local governments. The number of committees and the issues at hand vary widely from state to state. If bills make it through the committee process, they're usually read and then voted on by the entire body. If a bill or law passes in both bodies (or in Nebraska, one body) the law leaves the state legislature to be decided on by the governor. 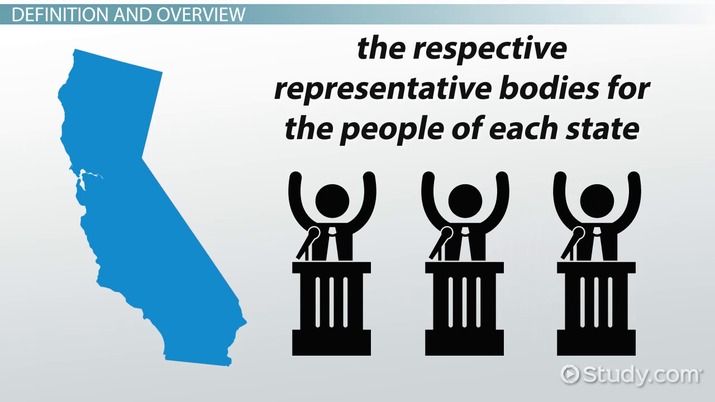 Coming up next: State of Delaware: History & Facts

Let's go over some details of a few individual state legislatures to help illustrate the broader definition we just covered. Keep in mind, because there are fifty states, every state legislature is different.

The Nebraska state legislature is unique in that it has only one house, whereas all other states have two. The unicameral legislature also has the lowest number of seats of any state legislature at 49. Each representative represents approximately 37,000 Nebraskan citizens, and all are members of multiple of the legislature's 14 standing committees.

Pluralist Theory in Government & Politics | What is Pluralism?

What is New Federalism? - Definition & Examples