View bio
This lesson will help you understand the triarchic theory and the three types of intelligence proposed by Robert Sternberg: analytical, creative, and practical.
Create an account

Anne is considered smart by all of her friends. She typically understands how to navigate any environment she is in and makes good judgment calls. In other words, she makes good decisions and uses common sense.

Mark likes new challenges. He enjoys figuring out puzzles and trying new things. His friends always come to him when they need a creative approach to a new situation.

Beth can process and organize information very effectively. She is an expert at analyzing material and uses this talent to obtain high grades in school and high scores on standardized tests. 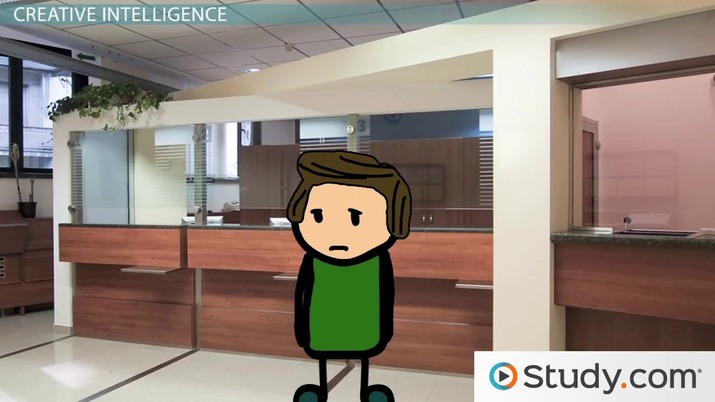 Coming up next: Perkins' Theory of Learnable Intelligence

Let's look at an example using Anne. She wants to purchase a used car. Anne doesn't want to be taken advantage of, so she is prepared with price comparisons and doesn't let the salesman talk her into purchasing any unnecessary extras. Because of this, she gets a better price than the person who bought a similar car the day before.

Our friend Mark demonstrates skill daily in both of these categories. Mark is a spy. He often has to quickly come up with new plans to address the situations he's placed in. Part of the reason he can do this so adeptly is because of his ability to easily reapply ideas he has used before to new situations.

Performance components carry out the actions that are necessary for solving problems. Examples would be making calculations, retrieving information from memory, or making mental comparisons. Knowledge acquisition components allow new information to be gained and stored in memory. This could also be thought of as a person's capacity for learning.

Beth is a great example of someone who is skilled with all three of these components. Beth is studying to be a statistician. There is a lot of new information for her to absorb, but she has great strategies for organizing and memorizing the information. Her ability to analyze information and compare it to her previous knowledge makes her an efficient learner. Because of this, Beth easily makes straight As in her advanced statistics classes even though many of her friends have had to work much harder to understand the concepts.

Compose an essay in which you describe and provide examples of each type of intelligence based on Sternberg's triarchic theory.

For practical intelligence: Thomas is 18 and recently saved up his money to buy a new gaming system. He went to his local electronics superstore because of its convenient location, but found they were charging $400 for the system. He then went online and found a reputable site that charged $300, with free shipping. He decided that even though he would have to wait a few extra days for the gaming system to arrive, it was worth it to save $100.
For creative intelligence: Crystal is a therapist whose clients frequently say unpredictable things and have erratic behavior. She has to think quickly to react appropriately and helpfully to each new scenario.
For analytical intelligence: Alex is organizing his fantasy baseball team. In preparation for the draft, he compiled a spreadsheet of each MLB pitcher's ERA and other stats to ensure that he picks the best-performing pitchers.

Write an essay that explains which type of intelligence you predominantly use.

Of course, there are no right or wrong answers here, as long as your answer is backed up with terminology from the lesson and appropriate examples.

What Are the Different Types of Intelligence?

What Are t-Tests? - Assessing Statistical Differences Between Groups