Have you ever wondered what the first clothes and shoes were like? Read this lesson to learn more about clothing types and materials in the Stone Age, the earliest period of human history.
Create an account

How Was It Made?

When you think about necessities for life, clothing and shoes are probably pretty high up on your list. They are especially important during the winter. You could literally freeze to death without clothes in the winter time in many places around the world today. Clothes are easy for us to find in the 21st century. We can just go to a store and buy a variety of different clothes. But how did the Stone Age people get clothing without places to buy fabric and thread, let alone ready-made outfits?

The Stone Age is the first period of human history, so Stone Age people were the first to create clothing. While they had a temperate climate throughout some of the Stone Age, they also went through some ice ages, making warm clothing essential to protect them from the elements. Stone Age people made much of their clothing from what was readily available: animals. They learned how to use animal hide and turn it into leather to make into warm clothing, sewing it together using bone needles. For thick material like leather, they would bore holes into hide first, then use the needles to sew threads or leather strings through, to hold it together.

They also made clothing from linen, which was made from weaving together threads from the flax plant. Linen was much better for warmer environments since it was light and thin. Towards the end of the Stone Age, people began domesticating animals. Sheep, of course, were among these animals, so the production and usage of wool was common during this period. They even began to dye it and other materials different colors. 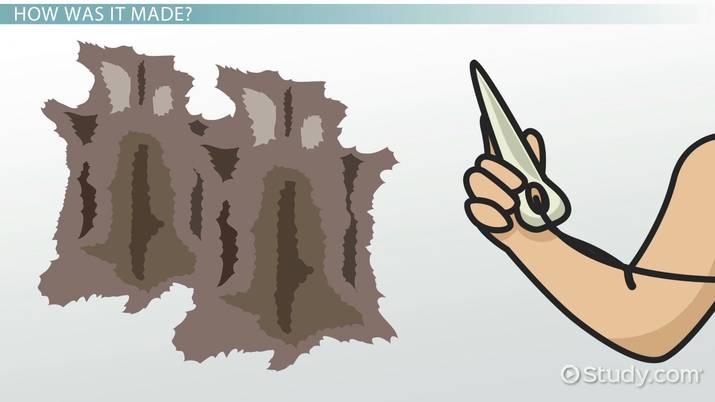 Coming up next: How did Stone Age Man Make Fire? - Discovery, Importance & Facts

Now that we know how the Stone Age people made clothes, and what they made them out of, let's look at different types of clothing they wore. Most people today have clothes they deem ''summer'' clothes and others that are ''winter'' clothes because they are specific to the weather and climate. Just like you would not wear flip-flops in the winter, or sweaters in the summer, Stone Age people had different types of clothing for different seasons.

Loincloths were common in the ancient world and acted sort of like underwear to protect the groin. In warmer climates, it was common for people to only wear loincloths made of linen, but in colder climates it seems people wore them under their clothes.

In cold climates, people wore leather leggings to keep their legs warm, not much different from what we have today. They also wore hats, typically made of leather, since they were used primarily in cold environments.

The main piece of clothing was a tunic, which was worn over the torso. Stone Age tunics were only stitched at the top where the shoulders were, combining two pieces of fabric, with a hole left for the head. The fabric would hang down the body, kind of like a poncho, and was probably tied around the waist with a belt.

They also wore heavy coats in colder environments. Unlike the tunic, which had a piece on the front and back, coats were more like cardigans that we have today, with an open front, and again, tied together with a belt.

Stone Age shoes indicate that prehistoric people were much more advanced than many people think. The first shoes were created during this period and were probably sandals. The sandals were made of straw, and were used to protect the soles of the feet.

Leather shoes, similar to moccasins, were more impressive. Rather than shoe sizes, shoes were made to fit a specific person's foot. They had a braided layer of straw, hay, and moss inside to provide more warmth, which was covered with leather and fur and stitched together. Replicas of these shoes show that they were actually pretty warm, and even slip-resistant on ice.

Stone Age people wore various types of clothing, which usually included loincloths. The tunic seems to be a common piece of clothing, made out of different materials depending on the climate and worn over the torso. Stone Age shoes were relatively advanced. Moccasin-like shoes provided warmth, comfort, and grips on ice.

What did Stone Age People Eat and Drink?

How Religion Developed in the Stone Age and Bronze Age

Food in the Neolithic Age

What Was Life Like in the Stone Age? - People, Society & Culture

Tools & Weapons of the Neolithic Age

Geography of Greece: Lesson for Kids