John has tutored algebra and SAT Prep and has a B.A. degree with a major in psychology and a minor in mathematics from Christopher Newport University.

Music can offer positive benefits to students by improving different areas of their lives. Explore different strategies for teaching music to high school students and learn how to develop a curriculum, use online tools for teaching music, and accommodate students with special needs. Updated: 01/04/2022
Create an account

Have you heard that teaching music to students can enhance other areas of their lives as well? Some studies even suggest it can enhance a student's creativity and improve test scores.

That's why the National Association for Music Education (NAFME) sponsors Music in our Schools Month (MIOSM) every year in March. This celebration provides a variety of opportunities for a high school teacher to become involved, including: 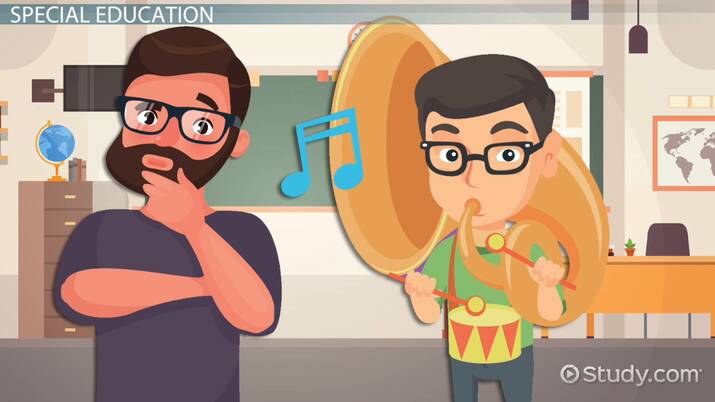 Try it now
Back
Coming up next: Strategies for Teaching Music to Special Education Students

One increasingly popular curriculum development strategy for teaching high school music is to blend modern popular music like country and western or hip-hop with old standards such as classical or even Native American music. This allows students to not only to hear the music but also to immerse themselves in the culture of the people.

The six-step teaching strategy is as follows:

Afterwards, quiz students to see if they can identify and differentiate each form of music. Or, ask them to create and choreograph their own dance or write their own sheet music.

As their primary instructional strategy, high school teachers have turned to online tools such as Music Prodigy, Practice First, and SmartMusic software. For instance, SmartMusic allows the student to slow down or speed up as need be while practicing and provides a sort of instant biofeedback as to whether the student is on pitch or in rhythm.

One teacher in Kentucky found the SmartMusic software to be an invaluable resource. For example, are you aware that most music students love practicing their scales about as much as most math students enjoy practicing their times' tables? Well, she found that one of her students who hated scales loved using the software. The software allowed the student to see how many notes he played correctly, and the teacher received feedback on how many times the student practiced.

Additional resources include those from the American School Band Director Association (ASBDA), which was founded in 1953 with the intention of promoting quality band instruction. Members can access a national newsletter online, as well as special award certificates for deserving students.

Software applications include Music Monitor, an app that allows a student to save a particular practice session. Afterwards, the student can either send it to his/her teacher or save it to review later.

Teachers can change their strategies of teaching music to accommodate children with special needs. In Florida, a boy named Billy, who had cerebral palsy, announced his intention to play a musical instrument. The music instructor wasn't sure what to do, as his student couldn't hold any of the instruments. The educator came up with the idea of having Billy play the tuba, as it wrapped around his body. When Billy was first learning to play the tuba, he used a brace and pillows for support while sitting down. He went on to become the number eight tuba player in the state and later played the sousaphone in the marching band using a specially made chair.

Let's review. Music can enhance other aspects of students' lives and may improve test scores. One popular way to implement a curriculum development strategy in high school is to teach both old standards and modern hits and then compare and contrast the two. Using a six-step teaching strategy, a music teacher plays short excerpts from various types of music and then has students discuss the similarities and differences.

As their primary instructional strategy high school teachers have turned to online tools such as Music Prodigy, Practice First, and SmartMusic software. Additional resources include the American School Band Director Association's online newsletter. Both mainstream and students with special needs can receive a quality high school music education, as long as music educators are willing to be creative and go the extra mile.

Technology in the Music Classroom

How to Teach Music: Methods & Tips

Melody vs. Harmony | Differences Between Melody and Harmony

Absolute vs. Relative Grading in the Classroom

What is Music? | Characteristics of Music & How Music is Made