When taking a multiple-choice test, the most important thing is to know the content covered on the exam. But beyond that, there are certain things you can do to increase your chances of passing. Watch this lesson for strategies for multiple-choice tests.
Create an account

Ellis is getting ready to take an exam that will allow him to earn college credit. He knows this is a great idea, because it means he'll have to take fewer classes in college, which will save him both time and money. It's a great deal!

Ellis has spent a long time studying the material on the test, but he's still very nervous. He's never been very good at taking tests, and he worries that he'll do badly because he's a bad test-taker, not because he doesn't know the material.

Let's look closer at the steps to take when approaching multiple-choice questions and how to guess in the best way possible. 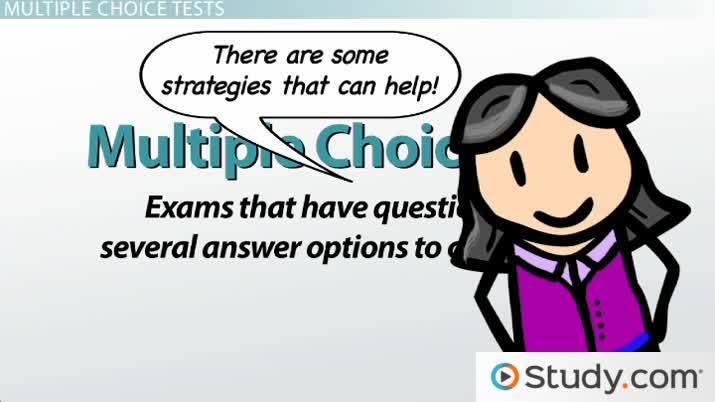 Coming up next: How to Write a Great Essay Quickly

Ok, Ellis is going to take a multiple-choice test, and he needs some help with strategy. What should he do when taking the test? How can he make sure that he is answering each question correctly?

Clearly, one element of doing well on any test is to know the material. But Ellis has studied the material thoroughly, and really knows it, so he can benefit from applying five simple steps to each question on the test.

If Ellis just started reading the question, he might think that he would need to calculate the number of apples or peaches that Jimmy and Sarah end up with. But if he reads the whole question, he realizes that the question is actually asking him about oranges. It's very important to always read the entire question.

2. Anticipate the answer as you read. Before he even looks at the answer choices, Ellis should try to answer the question as he reads. For example, when he reads the question about Sarah and Jimmy's fruit, he should figure out in his head that Jimmy has zero oranges, and then look for that answer among the choices.

3. Highlight or underline key terms or concepts. Some tests allow highlighters, while others only allow a pencil or pen. Either way, Ellis should underline or highlight key terms and concepts as he reads. For example, let's say that Ellis reads this question on his test: Brain-imaging studies have shown which system of the brain is responsible for primal emotions, like fear and hostility?

When he's reading that question, Ellis might want to underline key terms like 'system in the brain' or 'primal emotions.' These are key words that can help him find the correct answer.

4. Eliminate clearly wrong answers. Let's say that the answer choices for the question about the brain are as follows:

A) the limbic system

B) the triad system

When he looks at those choices, a couple of things pop out at Ellis: number one, the patella is a person's kneecap; and number two, there is no triad system in the brain. So both B and C can be eliminated as answers. That just leaves two options, A and D, to choose from.

Often, multiple-choice questions have one or more answers that are clearly wrong, so eliminate those first and then look at what's left.

5. Consider all possible answers. For most multiple-choice tests, you are looking for the best possible answer. That means that there might be another answer that is sort of right, but not as good of an answer. It's important, then, to keep reading, even if you find an answer that's good in the earlier choices.

For example, let's say that Ellis is taking a test, and he comes across this question: Which of the following was the most influential political driving force behind the American Civil War?

B) Taxes on tea

C) Hostilities between the English and Native Americans

Now, Ellis knows that states' rights were discussed during the Civil War. But is that the best answer? If he sees 'states' rights' and just goes ahead and marks it, he misses that answer choice D (slavery) is a better option. So he should remember to consider all the possible answers before deciding on one.

So, now Ellis knows that he should read the entire question, anticipate the answer, highlight or underline key terms, eliminate wrong answer choices, and consider all possible answers. But what if he's done all that and he still doesn't know the answer? What should he do?

Many people might tell Ellis that it's time to guess. But wait! Not every multiple-choice test is graded the same way. So Ellis needs to know if there's a penalty for getting an answer wrong. That is, does a wrong answer count against your score, or not?

If there's a penalty for getting an answer wrong, Ellis should only answer if he is pretty sure he's right. For example, in the Civil War question above, Ellis might quickly eliminate answers B and C because neither taxes on tea nor conflicts between the English and Native Americans were part of the Civil War.

But now he's left with answers A and D, and he's not sure whether states' rights or slavery is the best answer. If he will lose points for a wrong answer, but not for a blank answer, then he should only guess if he's pretty sure that it's one answer or another.

But what if there's no penalty for a wrong guess? That is, what if unanswered questions lose the same number of points as those answered wrong? If there's no penalty for a wrong guess, Ellis should choose the answer that he is pretty sure is right. For example, now that he's eliminated two answer choices, Ellis can choose the one he thinks might be right. And if Ellis doesn't have any idea whether the answer is states' rights or slavery, he can just bubble one in.

The point is this: If there is no penalty for a wrong guess, Ellis should fill in an answer on every single question, even if he has no idea what the answer is.

Multiple-choice tests offer questions with several answer choices from which the test-taker has to choose the best answer. For each question on a multiple-choice test, you should go through five steps: read the entire question, anticipate the answer, highlight or underline key terms and concepts, eliminate clearly wrong answers, and consider all the answer choices. If a blank answer does not count against you, mark an answer only if you are pretty sure you are right. But if a blank answer counts the same as a wrong answer, you should make your best guess and never leave the question blank.

Build your ability to do the following by studying this video lesson:

What is a Graph? - Lesson for Kids

What is Active Reading? - Definition & Strategies

How Story Elements Interact & Shape One Another

How to Identify the Problem and Solution in a Reading Selection

What Is a T-Test? - Procedure, Interpretation & Examples