What is a Stratified Random Sample?

A stratified random sample is a population sample that requires the population to be divided into smaller groups, called 'strata'. Random samples can be taken from each stratum, or group. 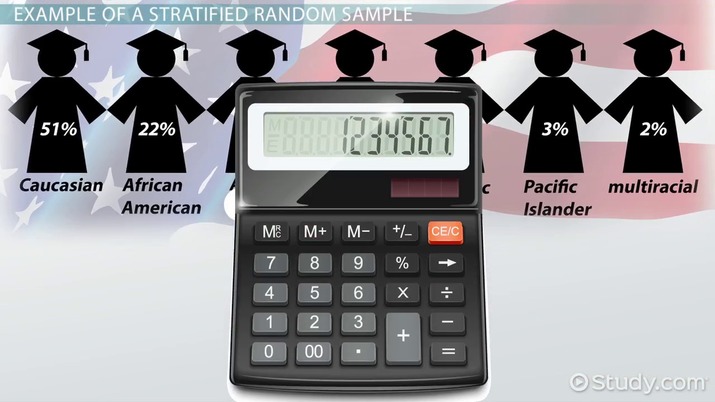 Coming up next: The Importance of Measurement in the Research Process

Example of a Stratified Random Sample

You find out that each year there are over 1,750,000 people graduating from college, which means that your population size is almost two million! It's impossible for your research team to collect data from every member of your population, so you decide to collect data from a sample, which is a subset of the population that is used to represent the whole population. You and your research team decide that you want to take a sample of 3,000 American college graduates.

How do you choose your sample? You could choose a random sample, in which each member of the population has the same chances of being selected for the sample.

Suppose that instead of conducting a random sample, you decide to use a stratified random sample. You look up the demographics of American college graduates and find that 51% of American college graduates are Caucasian, 22% are African-American, 9% are Asian, 8% are Native American, 5% are Hispanic, 3% are Pacific Islander, and 2% are multiracial. You divide your population into strata based off the participant's racial demographics. Here you have seven strata, one for each of the seven racial categories. Using this information, you can conduct either a proportional stratified sample or a disproportional stratified sample.

Let's assume that you have decided to conduct a proportional stratified sample. Your next step is to ensure that the proportion of the strata in the population is the same as the proportion in the sample. This means that 51% of your sample needs to be Caucasian (since 51% of the population is Caucasian), 22% should be African-American, 9% Asian, 8% Native American, 5% Hispanic, 3% Pacific Islander, and 2% multiracial. By calculating the proportions, you determine that the racial demographics of your 3,000 study participants should include:

You can see that the demographics of the stratified random sample are very different than those of the random sample.

Now that we have our population broken into strata and we have identified how many study participants we need from each strata, the next step is to use random sampling in order to pick the specified number of participants from each of the seven strata. In other words, we randomly select 1,530 Caucasians from all of the Caucasians in the population. We randomly select 660 African-Americans from all of the African-Americans in the population, and so forth.

In order for our samples to be truly random, three conditions must be met:

Once we have chosen our study participants from each stratum, what we have is a stratified random sample.

Advantages of using a stratified random sample include:

Disadvantages of using a stratified random sample include:

In your examination of the income of college graduates a year after graduation, you want to see the effects of gender and race on income. Which strata above would you choose to give the most accurate representation?

The best strata to choose would likely be the third option - dividing by both gender and race - so that comparisons can be made based on gender, race, or both.