View bio
How is society like the human body? Find out in this lesson as you read about Herbert Spencer and Robert Merton, who contributed to the theory of structural functionalism. Read about key elements of the theory and test your knowledge with a quiz. Updated: 04/18/2020
Create an account

What is Structural Functionalism? 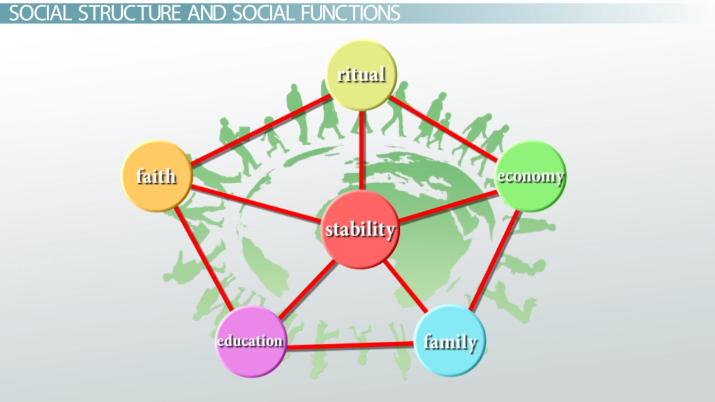 Coming up next: Behavior: Definition & Explanation

The structural-functional approach is a perspective in sociology that sees society as a complex system whose parts work together to promote solidarity and stability. It asserts that our lives are guided by social structures, which are relatively stable patterns of social behavior. Social structures give shape to our lives - for example, in families, the community, and through religious organizations. And certain rituals, such as a handshake or complex religious ceremonies, give structure to our everyday lives. Each social structure has social functions, or consequences for the operation of society as a whole. Education, for example, has several important functions in a society, such as socialization, learning, and social placement.

Herbert Spencer, who lived from 1820 - 1903, was an English philosopher. Spencer compared society to a human body. In the same way each part of the body works in harmony with other parts, each part of society works in harmony with all the other parts. If we want to understand the importance of the heart for helping the body function properly, we need to understand how it relates to other parts of the body. Similarly, if we analyze the functions of some aspect of society, such as education, we can learn how it impacts the other parts of the system. Functionalists emphasize that order and balance are the normal state of society, and a disruption in one part of the system will certainly disrupt the other parts. What would happen to other social institutions if the entire educational system became dismantled?

Let's review. Structural functionalism is a macro-level orientation, concerned with broad patterns that shape society as a whole. Functionalists view society as a complex system whose parts work together to promote solidarity and stability. Key theorists include Herbert Spencer and Robert Merton. Key elements are social structures and social functions. Social structures refer to any relatively stable pattern of social behavior found in social institutions, while social functions refer to the consequences for the operation of society as a whole. Sociologists also distinguish between manifest, or intended, functions and latent, or unintended, functions.

This lesson could contribute to your ability to:

Write an essay in which you first explain why Herbert Spencer compared society to a human body, and then come up with an example of your own to illustrate the structural function of society.
Example: You could use the example of an assembly line. If one part of the assembly line breaks down, what happens to the rest of the line?

Compile a list of as many different social structures that you can think of, and briefly describe the expected social behaviors of people in these structures.
Example: At the grocery store, people are expected to search for their items, place them in their cart, pay for them, and exit the store.

Interactions Between Social Majorities and Minorities