For example, Sammy lent his lawn mower to Pete. Pete cut his grass and returned the mower. A few days later, John noticed that the blades on the mower were not spinning. Since he had not used the mower since Pete returned it a few days ago, he could only assume Pete did something negligent to cause the blades to stop working. Sammy confronted Pete about the issue, but Pete had no answer. He insisted that he did nothing to cause damage to the mower and dismissed the argument immediately.

Seething over the non-working lawn mower, Sammy decided he would sue Pete for the value of the mower. Unsure in which court to file suit, he did a bit of research. Sammy learned that small claims court has subject matter jurisdiction over claims that are less than five thousand dollars, depending on the state. He and Pete live in Florida where the threshold for a claim in this court is exactly $5,000 (not including attorney or court fees).

In this case, the jurisdiction of the case was based on the monetary damages Sammy sought for the cost of replacing the mangled mower. If for some reason, Sammy or Pete wanted to see this case tried in a different court, it wouldn't be possible. Subject matter jurisdiction cannot be waived.

In some cases, state courts do not have subject matter jurisdiction over a case. To demonstrate this, let's see what happened when Betsy filed for bankruptcy.

Betsy was down on her luck and really needed to get the bill collectors off her back. With the phone ringing day and night, she made one of the most important decisions of her life - to declare bankruptcy. Upon filing her case, Betsy was informed that under subject matter jurisdiction, a bankruptcy case could only be filed and heard in a federal bankruptcy court. 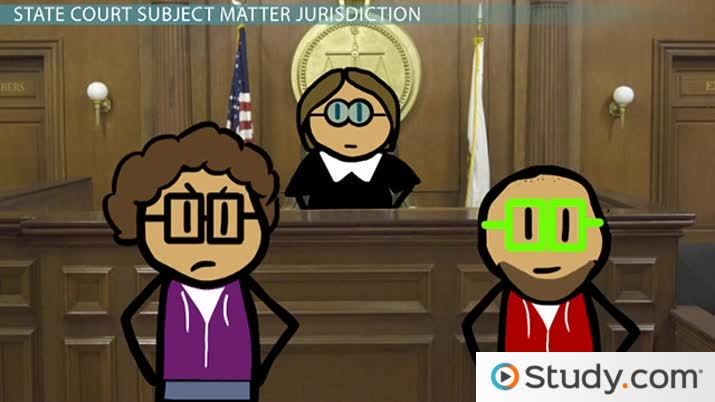 Coming up next: Jurisdiction over Property: Definition & Types

For example, Murray, a resident of Florida, was injured while riding on a jet ski manufactured by Fast Toys, Inc., whose primary place of business and manufacturing is located in California. Murray broke a leg and wanted $100,000 in compensation.

In order for the federal court to determine diversity jurisdiction, it would have to test the residency of both parties. By determining how many jet skis are made by Fast Toys and sold in Florida, the court would be able to prove Fast Toys' residency in that state. If a substantial amount of its revenues were generated in Florida, it would establish that Fast Toys has residency in the state, and the case would be moved to state court. Diversity jurisdiction would apply and the case would be heard in federal court, if it is determined that few Fast Toys jet skis are sold in the state.

This is not to say that Murray could not take this case to state court. Under concurrent jurisdiction, civil cases that fall under diversity jurisdiction can be heard in either state or federal court. The decision to use concurrent jurisdiction rests on whether a favorable outcome is more likely in one court over the other. Murray may choose to have his case heard in a Florida state court to gain a more satisfactory judgment.

The federal court system also tests federal question jurisdiction, and this refers to an action that results from a violation of one's constitutional rights or United States law.

When Wendell applied for housing at Happy Acres Rental Community, he was denied acceptance. He asked the rental agent, Pam, why his application was rejected and she offered him a response that did not sit well with him. Pam told Wendell that he would not fit into the community because most residents were of a different race. She also told him the decision was for his own peace as he would not be welcomed or accepted by neighbors.

One of the ways a court determines whether a case will be heard is based on subject matter jurisdiction.

Personal jurisdiction must also be established. In other words, the court must have power over a person involved in the issue.

Federal courts look at two types of subject matter jurisdiction. Diversity jurisdiction requires that the claim be between two parties who live in different states and be for an amount of money to exceed $75,000, and federal question jurisdiction states that an action that results from a violation of one's constitutional rights or United States law can be heard in federal court.

Watching this lesson should prepare you to:

How Venue is Determined for a Court Case

Warranties Under the Uniform Commercial Code

What Is the Uniform Commercial Code? - Definition & Example

Battery: The Elements of an Intentional Tort

What is Concurrent Jurisdiction? - Definition & Examples