As the rate of adolescent substance use increases so does the rate of youth who commit crimes, or juvenile delinquency. Some believe substance abuse, or the excessive use of drugs and/or alcohol, contributes to delinquent behavior, while others question if it's the delinquent behavior that encourages substance abuse. Either way you look at it, there's a definite link between the two. This is made evident by statistics of youth offenders—more than half of all adolescent offenders report using substances—as well as the fact that drug-seeking adolescents, who do not engage in additional criminal behaviors, are still considered to be delinquent. 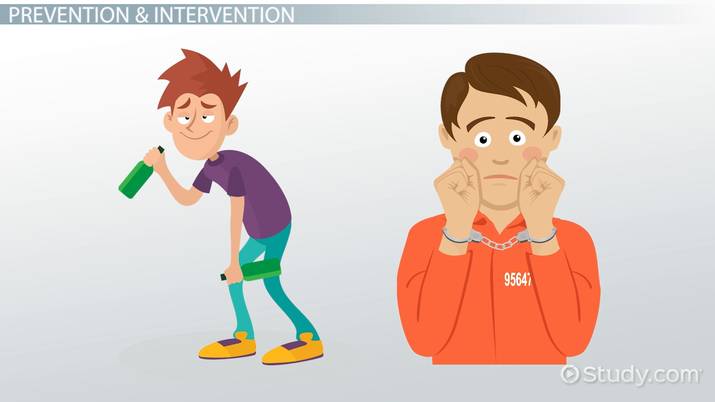 Coming up next: Drug Use Surveys: Types & Accuracy

How Are They Related?

When an adolescent begins to use drugs at an early age, it creates greater consequences to education, interpersonal, and cognitive development than if they began using later in life. This is due to the fact that the brain isn't fully developed until around the age of 25. Drug use causes irreversible damage to the prefrontal cortex, which is responsible for judgment, emotional control, and decision-making. Because adolescent drug use has long-term health and legal consequences, it is essential for prevention and intervention strategies to be implemented in schools to reduce the rate of adolescent substance use and juvenile delinquency.

We are far from eliminating adolescent drug use and criminal behavior altogether. However, there are proven, evidence-based strategies that work towards preventing problematic behaviors through education and intervention. There is a wide range of prevention and intervention programs, from D.A.R.E. to Juvenile Drug Court. Each has a different focus and goal related to substance use and delinquent behavior.

The simplest form of prevention strategies targets youth who have yet to engage in problematic behavior. The goal of these programs is to educate youth about the dangers of drug use and to teach them skills that will help them handle risky situations.

For those adolescents who have already begun experimenting with drugs, there are prevention strategies that focus on reducing the risk of their drug use becoming a serious problem.

Unfortunately, there are those who develop a drug addiction and/or begin engaging in criminal behavior. Although early prevention efforts were unsuccessful for these individuals, there's still a chance of preventing continued drug use and becoming an adult offender. The goal of these programs is aimed at preventing relapse, returning to drug use after a period of abstinence, or diverting the individual towards treatment rather than jail.

Evidence shows that getting an adolescent involved in treatment early on can greatly reduce the risk of continued drug use. There are numerous evidence-based treatment models that target at-risk youth. Treatment programs often work with adolescents on reducing risky behavior and drug use while teaching victim awareness and coping skills. The difference between treatment and intervention strategies is that treatment is voluntary, whereas intervention programs are sometimes involuntary. Treatment strategies have been proven to be more effective than intervention strategies due to the individual seeking help.

Substance abuse is the excessive use of drugs and/or alcohol. Juvenile delinquency refers to youth who commit crimes. Both are known to be associated based on a number of youth offenders reporting they use substances, as well as the type of damage adolescent drug use has on the developing brain. Specifically, drug use causes irreversible damage to the prefrontal cortex, which is responsible for judgment, emotional control, and decision making.

Due to their strong relationship, prevention and intervention strategies are necessary to combat substance use and juvenile delinquency. There are numerous prevention and intervention strategies that target youth at any age or stage, including those who have yet to use substances, those who have experimented, and those who have become addicted and criminally active. When an adolescent is ready to stop abusing substances, there are outpatient or residential treatment options that focus on relapse prevention, behavior modification, improving family relationships, and group therapy.