Suleiman rose to power as a sultan of the Ottoman Empire in 1520, renowned for his successful rule and reign. Learn about the transition of power to Suleiman from his father, and explore his military exploits against Belgrade, Rhodes, and the Habsburgs, leading to cultural domestic prosperity. Updated: 03/10/2022
Create an account

Greece had Alexander the Great, France had Napoleon, and the Ottoman Empire had Suleiman, the star of today's lesson. To the West, Suleiman is known as the 'Magnificent,' a fierce conqueror for the Islamic religion. To the East, he is known as the 'Lawgiver,' a brilliant ruler who brought the Ottoman Empire to its pinnacle of power and prosperity.

To begin, the Islamic Ottoman Empire of the 16th and 17th centuries encompassed a massive area. Before the birth of Suleiman in 1495, the Empire was ruled by his father, Selim I. Selim I, known as the Terrible, was responsible for great expansion but was also a feared ruler with a ferocious temper and the propensity to execute those who got in his way. Except for having a rather ruthless father, little is known about Suleiman's younger life. We do know that by the age of 16 he was already governing some cities in his father's empire. This prepared him to ascend to the role of Sultan, or the Muslim sovereign, upon his father's death in 1520. 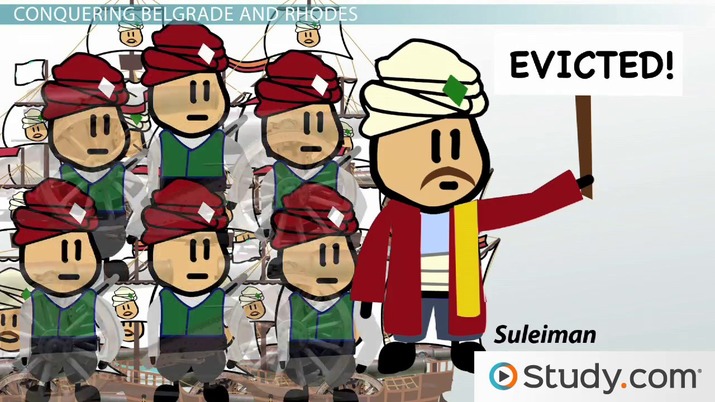 Try it now
Back
Coming up next: The Rise of the Vernacular and the Decline of Latin

With his ruthless father dead, Suleiman's new subjects wondered what his rule would hold. One dignitary stated of Suleiman, ''He is twenty-six years of age, tall, but wiry, and of a delicate complexion. His neck is a little too long, his face thin, and his nose aquiline. He has a shade of a moustache and a small beard; nevertheless, he has a pleasant mien (which means manner), though his skin tends to be a light pallor. He is said to be a wise Lord, fond of study, and all men hope for good from his rule.''

Lucky for the Ottomans, this dignitary's appraisal proved to be correct. While his father was only interested in war, Suleiman filled his palace with music and poetry. At the beginning of his reign, Suleiman ruled his people with kindness. He freed hundreds of slaves, even making one of them his most trusted advisor. He showered military officers with gifts and erected schools. In turn for these acts of kindness, he demanded complete loyalty from his subjects.

Although kind to his people, Suleiman also had his father's conquering blood coursing through his veins. Upon his ascension, Suleiman set out to improve his military. To his weapons pile, he added hundreds of cannons. He also expanded his army of Janissaries, the elite Turkish warriors, which were oddly former war captives and Christian youths pressed into service. Of course, all of these soldiers were forcibly converted to Islam and trained under the strictest discipline.

With his military and navy finely tuned, Suleiman led his forces in a campaign to destroy the Ottoman's Christian enemies at the edge of the Empire. Due to his skilled forces, the Ottomans captured the Christian city of Belgrade in less than thirty days! This win not only gave Suleiman access to the important Danube River, it also spread fear of the name Suleiman across all of Christian Europe.

Although the chance to invade further into Europe was within his fingertips, Suleiman turned his attention toward the Island of Rhodes, located in the Mediterranean. Rhodes was the home base of the Knights Hospitaller, a group of Christian knights who swore to protect the Holy Lands. However, in protecting the Holy Lands, they attacked Ottoman trading ships, which led to Suleiman launching an attack against the knights in 1522.

The Knights fought hard for months, but with over 400 ships, a land force of over 100,000 men, and more cannons than any battle had ever seen, Suleiman was determined to capture the Island of Rhodes. After about five months of being trounced, the knights gave in, and Suleiman allowed the survivors to depart.

War Against the Habsburgs

With Rhodes now under Ottoman control, Suleiman's sights turned back to Hungary and Eastern Europe. War again waged against the Hungarians. In the 1520s, Suleiman defeated and killed the Hungarian Louis II at the Battle of Mohacs. With the death of Louis II, the Hungarians will to fight was gone, giving the Ottoman Empire control of Eastern Europe.

However, this control would soon be tested when remaining Hungarians decided Ferdinand of the Habsburg Dynasty, the ruler of Austria, should be the new Hungarian king. With the support of his brother Charles V, the Holy Roman Emperor and the guy in charge of Spain and much of central Europe, Ferdinand regained control of Hungary.

In 1529, Suleiman returned to the battlefield and soon retook Hungary. Perhaps wanting to teach his opponents not to mess with him, Suleiman was not content with only Hungary. With thousands of men, Suleiman moved to conquer Vienna, Austria. Unfortunately for Suleiman, his eyes were a bit too big for his forces, and he was defeated by the Austrians. Not wanting to give up and not accustomed to losing, Suleiman tried again in the year 1532. Much to the shock of Suleiman, he was again handed his hat by the Austrians.

With these victories over Suleiman, the Habsburgs of Austria tried to regain control of Hungary. Battles waged during most of the 1540s, but Suleiman held strong. Within a few years, the Habsburgs were forced to give up their Hungarian dreams. Although the battle over Hungary had ended, the hatred between the Habsburgs and the Ottomans continued well into the 20th century.

Improvements on the Home Front

With Hungary firmly in his grasp and his empire at peace, Suleiman turned his attention homeward. Within his lands, he built mosques and schools. He improved the infrastructure of his empire through roads and an aqueduct system that surpassed even that of Rome's.

Suleiman was not only a warrior; he was a statesman and a lover of the arts. During his rule, he instituted legislation relating to Ottoman culture, taxation, education, and criminal justice. These laws, known as the Kanuns, would rule the Empire long after Suleiman's death. He would also usher in the Golden Age of the Ottoman Empire, a time in which art, poetry, literature, and architecture flourished.

Through the success of his many conquests, Suleiman was revered by his people. Also, the spoils of his victories made the Ottoman Empire prosper, not to mention they made Suleiman one of the richest men of all time. With over 300 women in his harem, legend holds that Suleiman ate from solid plates of gold and refused to wear the same clothes more than once.

In the 1560s, the aging Suleiman took to battle once more against Europe. In an ironic end, the illustrious Suleiman died in a battlefield tent in 1566. His son, Selim II, became the next sultan. Unlike his father, Selim II was an incompetent ruler with no interest in political affairs. He was so bad that history knows him as Selim the Drunkard! Sadly for the Ottoman people, the succeeding sultans were not much better. This eventually led to the decline of the Ottoman Empire.

After finishing this lesson, you should be able to recall that Suleiman, leader of the Ottoman Empire, expanded the borders of his empire to include Hungary itself; but he was more than just a war leader, he also improved the Ottoman infrastructure, education system, and criminal justice; and he aided in the Ottoman expansion of culture through art, music, and literature.

Rene Descartes and the Union of Religion and Philosophy

Martin Luther, the 95 Theses & the Birth of the Protestant Reformation

Rene Descartes and the Union of Religion and Philosophy

Martin Luther, the 95 Theses & the Birth of the Protestant Reformation