Kirstyn is a registered nurse and has a master's degree in Nursing Education. She has taught college Nursing courses.

View bio
Sulfonamides are medications used to treat many different disorders. In this lesson you will learn more about the definition, classification, and some examples of sulfonamides. Updated: 05/30/2021
Create an account

Cody arrives at his primary care doctor's office with an earache. After a thorough examination, his doctor states he has an ear infection and wants to prescribe him Bactrim. Cody's doctor then asks if he has ever had an allergic reaction to any sulfonamide medications, and that Bactrim is classified as a sulfonamide antibiotic. Confused by what a sulfonamide is, Cody asks his doctor for more clarification.

Sulfonamides are a synthetic substance created from the sulfonamide chemical group. They are used as a medication to treat a variety of illnesses and conditions. Sulfonamide medications are supplied as oral tablets, oral liquids, or even injections, and require a physician's prescription. 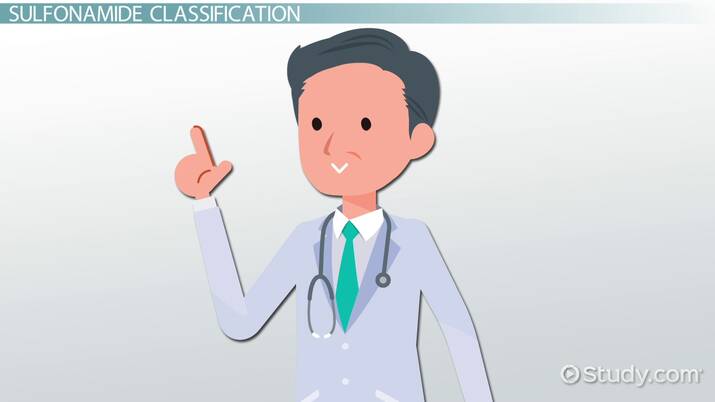 Coming up next: Sulfonamides: Side Effects, Allergies & Toxicity

There are generally thought to be two major classifications of sulfonamide medications based upon their chemical structure. Most commonly they're bacteriostatic antibiotic medications, which work by inhibiting bacteria from multiplying, but they don't kill the existing bacteria. Sulfonamides are often combined with trimethoprim, which acts as a bactericidal agent, meaning it kills bacteria.

Other types of sulfonamides do not have antibacterial properties. These can be classified under carbonic anhydrase inhibitors (CAIs), thiazide diuretics, loop diuretics, cyclooxygenase 2 (COX-2) inhibitors, and sulfonylureas.

CA inhibitors are primarily used to treat glaucoma (damage to the optic nerve in the eye) by reducing fluid pressure in the eye. Zonisamide, another sulfonamide, is also considered a CA inhibitor but is used to treat seizures. The exact mechanism of action of zonisamide is not fully understood.

Finally, sulfonylureas are used to help manage type 2 diabetes. They help lower the blood sugar level in the body by telling the pancreas to release more insulin.

Here are some general examples of sulfonamides:

Here are some CA Inhibitors:

Here are some thiazide diuretics:

All right, let's take a moment or two to review. Cody now has a better idea of what a sulfonamide medication is. Sulfonamides are synthetic medications created from the sulfonamide chemical group. One of the two basic classifications of sulfonamides include bacteriostatic antibiotics, which are used to treat bacterial infections by inhibiting bacteria from multiplying.

We also learned that the other group of sulfonamides are not antibacterial and include carbonic anhydrase inhibitors (CAIs), thiazide diuretics, loop diuretics, COX-2 inhibitors, and sulfonylureas. CAI medications are used to treat glaucoma, a disease in the eye. Diuretics are often used to treat hypertension. COX-2 inhibitors are a group of non-steroidal anti-inflammatory medications used to treat pain and inflammation. Lastly, sulfonylureas are used to manage type 2 diabetes by helping to lower blood sugar levels.

Because of the variety of illnesses that sulfonamides are used to treat, it is important for patients to talk with their doctors so they know the exact medications they are taking and what their purposes are.

In this activity, you'll check your knowledge regarding the definition, classification, and examples of sulfonamides.

For this activity, study the scrambled letters and unscramble or rearrange the letters to form a word or phrase that fits the given clues. To do this, you must right-click and print this page. With a pencil and an eraser, neatly write your answers in the appropriate blank spaces in the clues.

What is Myalgia? | Symptoms, Treatment and Causes of Myalgia

What is ADME? - Definition & Process

What Are Laxatives? - Definition, Types & Side Effects

Healthcare in the U.S.