The Sumerians, who inhabited southern Mesopotamia, were known for their impressive artwork, which influenced many nations even years after their decline. Discover Sumerian art and architecture, cuneiform, cylinder seals, ziggurats, and sculptures. Updated: 08/27/2021
Create an account

Sumerians inhabited mostly southern Mesopotamia from about 4000 BCE to about 2000 BCE. This area was prone to violent weather conditions, such as unexpected flooding. These chaotic conditions resulted in the Sumerians becoming a highly religious society. Religion provided a sense of order and reason behind the disorder. Much of the art created by the Sumerians is religious themed. Materials used included shell, lapis lazuli, limestone and gold. 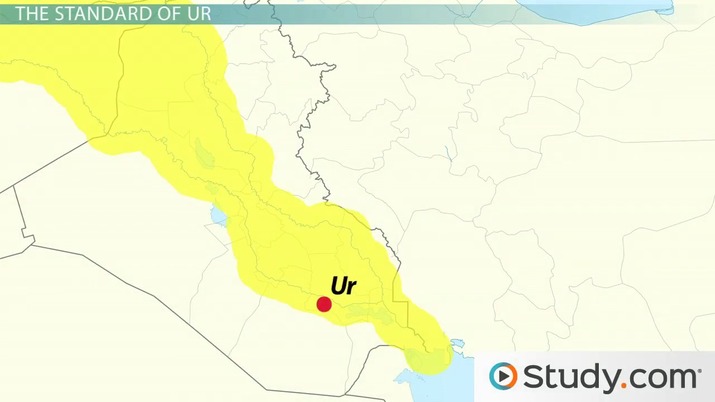 Coming up next: The Epic of Gilgamesh

One of the earliest known cities was called Uruk. In Uruk, we have found some of the earliest written records. Sumerians created the earliest form of writing, called cuneiform. Cuneiform began as picture symbols but developed into wedge-like shapes used to represent sounds. There was a temple in Uruk honoring a goddess named Innanna. Much of the produce from the city would be left at the temple for the goddess, then processed for use (barley used for beer, for example) and given back to the people. Records were created to record this process. These records were made by using cuneiform on clay tablets.

To create the signature on a tablet, the Sumerians created beautiful, elaborate cylinder seals. The seals would contain carvings that, when rolled across wet clay, would leave an impression in the clay. Seals may have contained images or cuneiform to represent a signature. They may have also been an indication of social status. Many of the seals were very small, usually less than two inches in height. Seals were usually carved in agate, chalcedony, lapis lazuli, steatite, limestone, marble, quartz or hematite. Some seals were carved in gold or silver. The images on the seals were carved with great attention to detail. Seals are important because of their unique nature. Each seal contained its own images, reflective of its owner. Seals may have also reflected what was popular stylistically at the time of their creation, opening another window into Sumerian culture.

The Standard of Ur

Another ancient city in Sumer is known as Ur. The city may have been founded by the Ubaids, who preceded the Sumerians in inhabiting the area. Ur became so powerful that it held control over all of Sumer at varying times. The Standard of Ur is an artifact that was found in an excavation at Ur. The standard may have originally been a hollow box. Its original purpose is still unknown. It consists of a number of wooden fragments containing vivid mosaics. The standard contains images of many participants in Ur's society. Figures include kings, soldiers, commoners and even livestock being brought as a gift to the king. The images depicted are reflective of Sumer's largely farming culture.

Another artistic and architectural achievement found in Ur is a mostly preserved ziggurat. A ziggurat was a structure similar to a step pyramid that contained various levels. The top level held a temple, usually dedicated to a city's patron deity. The ziggurat found at Ur was dedicated to a moon god named Nanna. It was likely built around 2100 BCE. Although the lower portions of the structure were mostly found intact, the temple did not survive. Ziggurats were located in the center of the city. They were likely the center of daily commercial and social interaction. The ziggurats were designed to be a comfortable dwelling place for the local deity.

In addition to the carvings created in cylinder seals, Sumerians also created freestanding sculptures and statuettes. Carvings indicated artists took great care in creating delicate details. Statuettes found at a temple are carved in a similar nature but are mostly cylindrical in shape. They are of varying heights, indicating a hierarchy. For example, the tallest figure is a deity, while a slightly shorter figure represents a priest. The statuettes are made of marble, and each has large, staring eyes. The insets in the eyes would have once held a colored stone. The figures face forward with their hands clasped in front of them.

Sumerian art and architecture were impressive for their time. As the Sumerian civilization faded, its success was an inspiration for many other groups. For this reason, Sumerian art was often mimicked by other successful cultures. Ziggurats, for example, remained popular for years and have been found all over what was once the Mesopotamian region. The Assyrians, for example, created ziggurats similar to those constructed by the Sumerians but bigger. Assyrians, however, continued to use mud brick to create these structures, as the Sumerians did, even though they held plentiful resources of stone.

After viewing this lesson, students should be able to:

Use of Naturalism & Stylization in Mesopotamian Art