I have taught Language Arts for 4 years and served as a Professor for ENG 101 and GLS for more than 3 years. I am a licensed teacher with a B.A. in English Literature, International and Global Studies, and Religious Studies. I have a M.A. in Global Studies.

The novel ~'Giant~' by Edna Ferber is about the life of Texans from 1925 until 1950. When the novel hit stands in 1952, scandal erupted as the people of Texas rebuked this book that criticized the sacred rituals that many Texans reveled in. Discover why ~'Giant~' was a novel that left people talking. Updated: 09/14/2021
Create an account

Edna Ferber is the author of Giant, the book that caused one of the greatest scandals in Texan history. You may be familiar with the book's movie adaptation because it was James Dean's last role. Regardless of the narrative's presentation, the content inside of Ferber's novel created controversy for all the right reasons. Could you imagine reading a book about your town in the present day that shined a light on all the social norms you practiced? In an era when racism and classism ran amok through the state of Texas, Giant provides a good hard look at the struggles many people faced due to circumstances beyond their control.

The novel begins in the age it was written: 1950s Texas. It opens with Bick Benedict, his wife Leslie, a good deal of family, and his friends flying on his aircraft to an oil baron's social party. The oil baron is Jett Rink, who Bick does not like. Although he does not want to attend the party, Bick believes he must in order to ''save face.''

Jett struck oil and became rich on land sold to him by Bick, and it has silently tormented Bick. Bick knows people will think he is weak if this is the reason for his absence at the party, but in all honesty, Jett is a disgusting drunk with few friends. Regardless of his distaste for Jett, Bick is determined to be at the party because the best of Texas's upper crust will be there.

Ferber gives you an immediate dose of racism when Bick and his family arrive at the party and Jett's staff refuse to serve Bick's daughter-in-law, Juana, because she is Mexican. Jordy, Bick's son and Juana's husband, becomes enraged and goes to look for Jett. Jett, being the terrible person that he is, strikes Jordy repeatedly. Jordy is still alive but in terrible pain. Afraid that Jordy is dead, Leslie says, '' It caught up with you, it caught up with us. It always does.'' 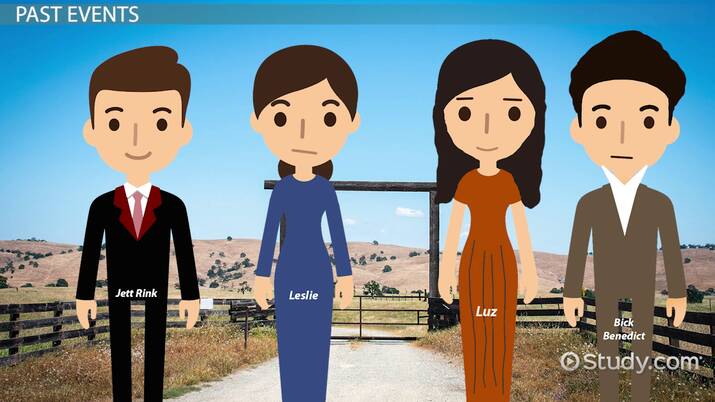 When Leslie says this, you're probably wondering what has happened in the past and caught up to them. Ferber gives you the chance to experience this as the novel jumps 25 years into Bick's past. The story picks up at the time Bick meets Leslie Lynnton, the future Leslie Benedict. The jump into the past immediately highlights Jett's infatuation with Leslie, and we realize his terrible behavior toward the Benedicts comes from his infatuation with her that began when she arrived in Texas.

Leslie Lynnton is the daughter of a Virginian doctor and a bossy mother. Excited to be the wife of a Texan land tycoon, Leslie begins learning as much as she can about the Texas lifestyle. Leslie is sorely disappointed when she finally arrives in Texas and realizes that Bick's sister Luz is the female in charge.

Leslie is shocked to find how different the attitudes of Texans are. One day, she simply goes for a walk outside and is immediately told that walking is for Mexicans, not wealthy white women. From this day forward, we see Leslie being handled by Bick and Luz as they try to turn the simple girl into a socialite. Leslie attempts to regain freedom at the same time Jett Rink shows up for work on the Benedict ranch.

Jett takes Leslie on a car ride where she witnesses the living conditions of the Mexicans. Leslie's distaste for Texas racism and classism leaves her feeling disappointed in Bick's indifference to their treatment. Bick keeps Jett hired because he is talented. ''When he drinks he goes kind of crazy. I've fired him a dozen times but he always seems to turn up back at the ranch, one way or another. He's kind of genius, Jett is. . . He's a wizard—when he is sober.''

Keeping him on proves to be a terrible decision, as one week later, Luz is thrown off the wild horse named ''My Mistake'' and dies. Bick comes to learn that Jett egged Luz on, knowing the horse had not been tamed and drugging the horse on purpose. Angry, Bick fires Jett and tries to take a portion of the land he deeded him back. Unfortunately, the cunning Jett has everything in writing, and the land remains his.

Time passes, and Bick and Leslie continue their lives as Texas ranchers. Bick becomes set on being a cattle baron, but Leslie suggests they look into other pursuits. This marks the start of Leslie's attempt to be a wife and partner to Bick.

During this time, Leslie also begins to open her eyes to the class differences between the servitude relationship of Mexicans to white Texans. Even on the family farm, Leslie sees that Mexicans have very few opportunities to gain an advantage in life. During this span of time, Leslie and Bick have twin children: a boy and a girl. They name the boy Jordy and the girl Judy. The couple has another daughter a while later and they name her Luz after Bick's sister.

Leslie decides to take the children to Virginia when they are small to visit her family. She takes the trip as a reprieve from Bick. Leslie loves Bick but does not like the person he is becoming.

For a while, she debates whether or not she should return to Texas. Her father, Dr. Lynnton, tells her that many of the feelings she has experienced are part of a change to come. ''Your Bick won't change—nor you—but your children will take another big step. Enormous step, probably. Some call it a revolution but it's evolution, really. Sometimes slow, sometimes fast, horrible to be caught in it, helpless.''

Time also passes for Jett who finds oil on a shoe print left by Leslie. He becomes crazed with power. He tells Bick that he is going to be richer than Bick and steal away Leslie. This ends in a fight that leaves both men feeling angry. Jett continues to thrive on the oil and is unable to convince the stubborn Bick to allow him to drill the family ranch. Bick wants to protect his legacy.

Leslie's father, Dr. Lynnton, is a wise man who knows what he is talking about because when Jordy grows up, he marries Juana, a Mexican, and tells his parents after the fact. Bick becomes enraged when Jordy refuses to accept his role as a cattle rancher and turns him away. With none of his children interested in continuing the family ranch, Bick decides to accept Jett's offer. The family ranch is drilled, and the Benedicts are soon wealthier than ever before from the oil found on the land.

The novel closes with a fight at a diner that starts when a man named Sarge insults Jordy and Juana's son as well as a Mexican family trying to eat in the diner. Bick fights the man and loses. Bick sadly tells Leslie that he has lost the fight for the family's legacy. Leslie smiles, kisses him, and tells him that he is her hero and has protected their family successfully.

Edna Ferber wrote the novel Giant depicting the lives of Texans in 1950s Texas. The novel is centered around the land tycoon Bick Benedict, the sleazy rich oil baron Jett Rink, and Bick's lovely wife and Jett's unrequited love, Leslie. The novel begins in present time with Bick and Leslie's son Jordy getting into a fight with Jett over Jordy's disrespected wife, Juana.

The novel jumps back 25 years, and we see that Jett and Bick's whirlwind relationship has been tainted by Jett's hand in the death of Bick's older sister, Luz. Leslie learns the lifestyle of the Texans and is displeased with the clear classism and racism taking place on the ranch. After talking with her father, Dr. Lynnton, Leslie comes to realize that change isn't immediate.

Change does come after many years when Jordy marries a Mexican and the children refuse to take over the family ranch. Bick decides finally to agree to Jett's offer to dig for oil, and the family becomes even wealthier. The novel concludes with Leslie's reassurance that Bick has in fact preserved the family legacy successfully.

Resurrection in A Tale of Two Cities

What is Western Civilization? - Definition & Overview

What is a Newton? - Units & Explanation

The Gift of the Magi by O. Henry: Summary, Theme & Analysis