Mary Ellen is a science and education writer with a background in chemistry. She holds an M.S. in analytical chemistry and has worked as a high school science teacher.

Definition of a Supergiant

The name of this type of star is pretty descriptive. It's not just a giant, it's a supergiant. These are the biggest, most massive, and most luminous stars in the universe. Masses of supergiant stars range from between eight and twelve times the mass of the sun in our solar system. The luminosity of supergiant stars, or the amount of energy they give off, can be between 10,000 and one million times that of our sun. The radius of a supergiant may be anywhere between 30 to 1,000 times that of the sun. 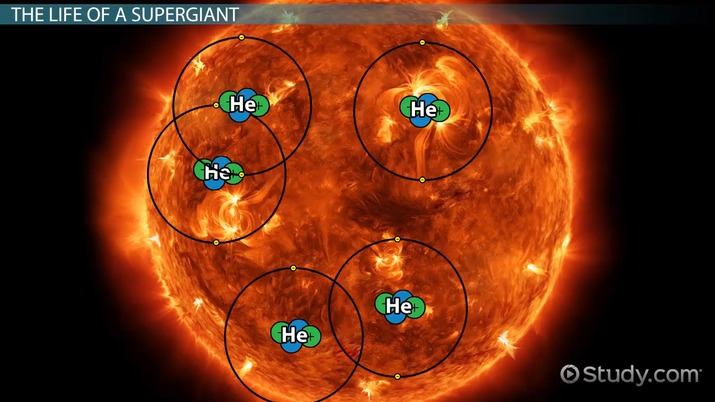 Coming up next: The Sun's Chromosphere: Definition, Temperature & Facts

Astronomers have classified and named different types of stars based on their properties. These include the size of the star, the kind of energy it emits (often a specific color of visible light), how bright it is, and the temperature of the star. There are different classification schemes, but the most traditional one gives descriptive names to star types like, red dwarf, white dwarf, giant, and supergiant.

The classification categories of stars also generally correlate with the lifespan of a star. For instance, a white dwarf is a star at the end of its life cycle. We can't always classify stars by life stages, though, because not all stars age and die in the same manner. While some stars will end as a white dwarf, others will end in a spectacular supernova, which is basically the explosion of a star, while others will shrink into a black hole.

The Life of a Supergiant

All stars begin a protostar. This is a cloud of gas that, over time, will collapse and condense under the force of gravity. As this happens, the cloud gets smaller and begins to glow with energy from the heat of the energy of gravitational collapse. This process can take up to 100,000 years. Eventually the pressure and heat of the center of the protostar becomes great enough for nuclear fusion to begin, and the protostar becomes a star.

A star becomes a supergiant when it runs out of hydrogen to burn in its core. Main sequence stars are in a state of equilibrium in terms of size. The fusion reaction in the core causes the material of the star to expand outward, but the force of gravity resists that expansion. The result is a star with a stable size, that is, until the reaction stops.

Stars that are destined to become supergiants burn through their hydrogen quickly and then fuse helium and even bigger elements. This continues until they have created a core of iron. The speed and intensity of the fusion reaction creates a tremendous amount of energy. This allows the star to expand and overcome the force of gravity and explains how these stars get to be so large compared to others.

The life of a supergiant is shorter than other stars. They burn through their fusion reactions in just a few million years, compared to the billions of years that stars like our sun last. Eventually a supergiant will collapse on itself. When all of the matter of the star hit the iron core, it bounces outward in a huge explosion called a supernova. A supernova produces more energy in a brief period of time than our sun will create in its entire lifespan. Supernovas, while they last, are capable of outshining galaxies.

Supergiant Stars We Can See

Supergiant stars are some of the brightest in the night sky, thanks to their intense luminosities. In fact, one supergiant star, Deneb, is one of the most distant objects from earth that you can see with the naked eye. You can see it because it gives off so much light. You can find Deneb in the constellation called Cygnus, or the swan. Rigel is another supergiant, which you can find in the constellation of Orion. Both Deneb and Rigel are supergiants that emit blue light.

Stars begin as clouds of gas called protostars. These clouds eventually condense and begin a reaction called nuclear fusion (or a reaction that fuses hydrogen atoms together to make helium) that produces the energy, color, and brightness of a star.

The most massive stars burn through their fuel quickly and expand into supergiant stars, which are 30 - 1,000 times bigger than our sun. These are the biggest, brightest, and hottest stars in the universe, and they have much shorter lifespans than main sequence stars, which is a star when a protostar begins the fusion reaction and the same kind of star our sun is. A supergiant ends in a massive explosion called a supernova. Deneb (a blue supergiant and one of the most distant objects from earth that you can see with the naked eye), Rigel (another blue supergiant, which you can find in the constellation of Orion), Betelgeuse (a red supergiant also found in Orion), and Antares (a red supergiant found in the Scorpio constellation) are all examples of supergiants that you can see from Earth.

How Does the Interstellar Medium Help Form Stars?

Star Types & Classification | What are Different Types of Stars?

Base in Chemistry | Definition & Examples

Newton's First Law of Motion: Examples of the Effect of Force on Motion