In Charles Dicken's novel, 'A Tale of Two Cities,' we meet the character Sydney Carton. At first, this character appears to be limited, but as the story unfolds, he demonstrates the greatest acts of sacrifice and love.
Create an account

In A Tale of Two Cities, Sydney Carton is the opposite of Charles Darnay, the protagonist in the story, although the two are uncannily close in appearance. Carton is a lawyer and a hard drinker, and Charles Dickens, the book's author, introduces him as 'the idlest and most unpromising of men.' If you have seen the movie, Star Wars, try and think of Sydney Carton as the Han Solo of the 1800s. He bucks the system and is likable in spite of his social flaws. 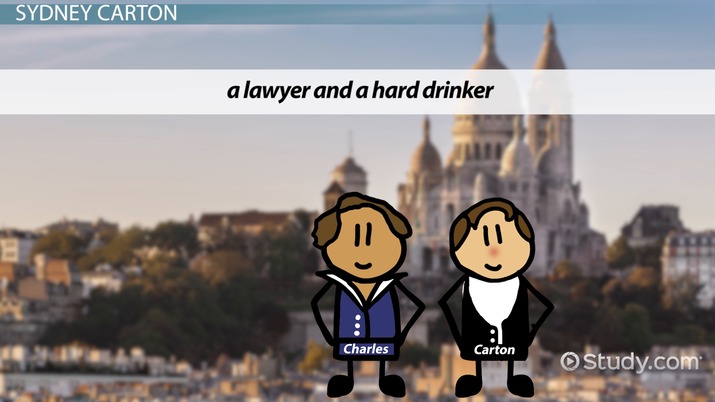 Carton is single and seems to be seeking meaning and purpose in life. Sydney Carton works for Mr. Stryver, an ambitious lawyer. Dickens says that '…although Sydney Carton would never be a lion, he was an amazingly good jackal…,' meaning that he does the grunt work for Stryver but does not take the lead.

In Chapter Five of Book Two, Stryver and Carton are drinking together and talking about the events of the day, as they often do. Here, Stryver gives us some insight into Carton's character, when he says that Carton is up one minute, and down the next and prone to mood swings. Then Carton himself mentions that when he was in school, he would do his friends' homework, but not his own -- that was 'just his way.' To this, Stryver replies, 'Your way is, and always was, a lame way. You summon no energy and purpose.'

It surprises us to see that people were called 'lame' even in the 19th century! But it is that last sentence that gives us the most insight about Carton: he has no purpose in life.

Sydney Carton needs a purpose in life, which he finds through his relationship with Lucie Manette. When he first sees Lucie in court, Carton resists her innocent beauty, but her purity strikes something in his soul that he thought was long dead. When he returns home after drinking with Stryver, he feels empty and says:

Waste forces within him, and a desert all around, this man stood still on his way across a silent terrace, and saw for a moment, lying in the wilderness before him, a mirage honourable ambition, self-denial, and perseverance. In the fair city of this vision, there were airy galleries from which the loves and graces looked upon him, gardens in which the fruits of life hung ripening, waters of Hope that sparkled in his sight. A moment, and it was gone.

To Sydney Carton, Lucie was that 'water of Hope,' while he was that 'mirage of honourable ambition.' Their meeting was a turning point for Carton. Somehow, his purpose in life would become intertwined with Lucie's, although she eventually marries Charles Darnay. By way of foreshadowing, Carton makes this statement to Lucie before she even marries: 'Think now and then that there is a man who would give his life, to keep a life you love beside you!'

When Charles Darnay is imprisoned in France while trying to save his family's former servant, Gabelle, Lucie, her daughter, her father, Doctor Manette; and Lucie's servant Miss Pross, go to France to try to release him. Dr. Manette, a former prisoner in the Bastille, uses his influence, and Darnay is released, only to be arrested again because he's an aristocrat and an emigrant. His situation is dire, and he's destined for the guillotine. Sydney Carton overhears Madame Defarge say she will have Lucie and her daughter executed, as well.

With careful planning, Carton proceeds to switch places with Charles Darnay, as they look so much alike. He decides that it is his destiny to let Charles live and care for Lucie, and in doing so, Carton goes to the guillotine. This lawyer who once lived for himself finds purpose and peace in giving the ultimate sacrifice, his own life. The novel ends with his words,

In A Tale of Two Cities by Charles Dickens, Sydney Carton is a lawyer and a hard drinker who lacks a purpose in life. His life changes forever when he meets Lucie Manette who later marries Charles Darnay, an aristocrat and the protagonist of the novel. Carton, who loves Lucie, takes Darnay's place in prison, where he is awaiting execution. Carton sacrifices his own life to save Darnay's and goes to the guillotine with a sense of purpose and peace.

A Tale of Two Cities by Charles Dickens | Summary & Characters

Resurrection in A Tale of Two Cities

Metaphors in A Tale of Two Cities

Love in The Importance of Being Earnest: Theme & Quotes