The word symbiosis literally means 'living together,' but when we use the word symbiosis in biology, what we're really talking about is a close, long-term interaction between two different species. There are many different types of symbiotic relationships that occur in nature.

In many cases, both species benefit from the interaction. This type of symbiosis is called mutualism. An example of mutualism is the relationship between bullhorn acacia trees and certain species of ants. Each bullhorn acacia tree is home to a colony of stinging ants. True to its name, the tree has very large thorns that look like bull's horns. The ants hollow out the thorns and use them as shelter. In addition to providing shelter, the acacia tree also provides the ants with two food sources. One food source is a very sweet nectar that oozes from the tree at specialized structures called nectaries. The second food source is in the form of food nodules called Beltian bodies that grow on the tips of the leaves. Between the nectar and the Beltian bodies, the ants have all of the food they need.

So, the ants get food and shelter, but what does the tree get? Quite a lot actually; you see, the ants are very territorial and aggressive. They will attack anything and everything that touches the tree - from grasshoppers and caterpillars to deer and humans. They will even climb onto neighboring trees that touch their tree and kill the whole branch and clear all vegetation in a perimeter around their tree's trunk, as well. The ants protect the tree from herbivores and remove competing vegetation, so the acacia gains a big advantage from the relationship. In this case, the acacia is considered a host because it is the larger organism in a symbiotic relationship upon or inside of which the smaller organism lives, and the ant is considered to be a symbiont, which is the term for the smaller organism in a symbiotic relationship that lives in or on the host. 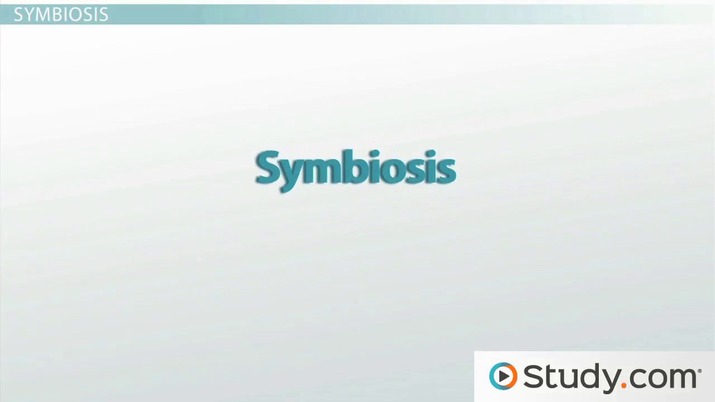 Coming up next: Populations: Density, Survivorship and Life Histories

An astounding number of mutualistic relationships occur between multicellular organisms and microorganisms. Termites are only able to eat wood because they have mutualistic protozoans and bacteria in their gut that helps them digest cellulose. Inside our own bodies, there are hundreds of different types of bacteria that live just in our large intestine. Most of these are uncharacterized, but we do know a lot about E. coli, which is one of the normal bacteria found in all human large intestines. Humans provide E. coli with food and a place to live. In return, the E. coli produce vitamin K and make it harder for pathogenic bacteria to establish themselves in our large intestine. Whether or not most of the other species of bacteria found in our digestive tract aid in digestion, absorption, or vitamin production isn't completely known, but they all make it harder for invasive pathogens to establish a foothold inside us and cause disease.

Now, let's say by some chance, a pathogenic bacteria does manage to establish itself in a person's large intestine. The host provides a habitat and food for the bacteria, but in return, the bacteria cause disease in the host. This is an example of parasitism or an association between two different species where the symbiont benefits and the host is harmed. Not all parasites have to cause disease. Lice, ticks, fleas, and leeches are all examples of parasites that don't usually cause disease directly, but they do suck blood from their host, and that is causing some harm, not to mention discomfort to their host. Parasites can also act as vectors or organisms that transmit disease-causing pathogens to other species of animals. The bacteria that cause the bubonic plague are carried by rodents, such as rats. The plague bacteria then infect fleas that bite the rats. Infected fleas transmit the bacteria to other animals they bite, including humans. In this case, both the flea and the bacteria are parasites, and the flea is also a vector that transmits the disease-causing bacteria from the rat to the person.

Commensalism is an association between two different species where one species enjoys a benefit, and the other is not significantly affected. Commensalism is sometimes hard to prove because in any symbiotic relationship, the likelihood that a very closely associated organism has no effect whatsoever on the other organism is pretty unlikely. But, there are a few examples where commensalism does appear to exist. For example, the cattle egret follows cattle, water buffalo, and other large herbivores as they graze. The herbivores flush insects from the vegetation as they move, and the egrets catch and eat the insects when they leave the safety of the vegetation. In this relationship the egret benefits greatly, but there is no apparent effect on the herbivore.

Some biologists maintain that algae and barnacles growing on turtles and whales have a commensalistic relationship with their hosts. Others maintain that the presence of hitchhikers causes drag on the host as it moves through the water and therefore the host is being harmed, albeit slightly. In either case, it is unlikely that the fitness of the host is really affected by the hitchhikers, so commensalism is probably the best way to describe these relationships as well.

Amensalism is an association between two organisms of different species where one species is inhibited or killed and the other is unaffected. Amensalism can occur in a couple different ways. Most commonly, amensalism occurs through direct competition for resources. For example, if there is a small sapling that is trying to grow right next to a mature tree, the mature tree is likely to outcompete the sapling for resources. It will intercept most of the light and its mature root system will do a much better job of absorbing water and nutrients - leaving the sapling in an environment without enough light, water, or nutrients and causing it harm. However, the large tree is relatively unaffected by the presence of the sapling because it isn't blocking light to the taller tree, and the amount of water and nutrients it can absorb are so small that the mature tree will not notice the difference.

Amensalism can also occur if one species uses a chemical to kill or inhibit the growth of another species. A very famous example of this type of amensalism led to the discovery of the antibiotic known as penicillin. Alexander Fleming observed amensalism occurring on a plate of staphylococcus aureus surrounding a contaminating spot of penicillium mold.

He was the first to recognize that the mold was secreting a substance that was killing the bacteria surrounding it. Other scientists later developed methods for mass-producing the bacteria-killing chemical which we now call penicillin.

Let's review. In biology, symbiosis refers to a close, long-term interaction between two different species. But, there are many different types of symbiotic relationships. Mutualism is a type of symbiosis where both species benefit from the interaction. An example of mutualism is the relationship between bullhorn acacia trees and certain species of ants. The acacia provides food and shelter for the ants and the ants protect the tree.

Parasitism is an association between two different species where the symbiont benefits and the host is harmed. Fleas, ticks, lice, leeches, and any bacteria or viruses that cause disease are considered to be parasitic.

Commensalism is an association between two different species where one species enjoys a benefit and the other is not significantly affected. Probably the best example of commensalism is the relationship between cattle egrets and large herbivores. The cattle egret benefits when insects are flushed out of the vegetation while the herbivore is unaffected by the presence of the cattle egret.

And finally, amensalism is an association between two organisms of different species where one species is inhibited or killed and the other is unaffected. This can occur either through direct competition for resources, or it can happen when one species uses a chemical to kill or inhibit the growth of other species around it. A classic example of amensalism is the ability of penicillium mold to secrete penicillin, which kills certain types of bacteria.

Relationships are tricky. Whether it be between two humans or organisms engaged in symbiotic relationships, depending on another living creature is hard. One way for humans to manage their feelings in relationships is to journal about how they are feeling. In this activity, you're going to apply the therapeutic concept of journaling to two organisms engaged in symbiosis. You should research a symbiotic relationship you are interested in, whether it be mutualism, commensalism or parasitism, and find a specific example. Then, write at least three journal entries from each organism in a way that describes some of the benefits and struggles that each organism experiences.

Some examples of experiences you should include in your journal entries:

By the end of the activity, you should have six complete journal entries, three from each organism in the relationship,, that reveal scientific details about the relationship and apply human emotions to the experience.

Impact of Pathogens on Biological Communities

Mutualism Examples in Animals | What Is Mutualism?

Parasitism Types & Examples | What Is Parasitism?

Biogeochemical Cycling and the Phosphorus Cycle