In this lesson, we'll discuss symbolic interactionism, which is a theory regarding social behavior and interaction. We'll explore its history and development as a theory as well as some examples of how to apply the theory to our everyday lives.
Create an account

When you are in public, do you ever catch yourself changing your stance, adjusting your look, or the way you speak based on how you think other people are looking at you? You might want people to see you in a certain way - friendly, attractive, or approachable, or even unapproachable or tough - whatever is ideal in the moment. Those adjustments that you're making can be explained by symbolic interaction theory, also called symbolic interactionism, a theory about social behavior and interaction.

This theoretical perspective looks at how people navigate their interactions with others and assign meanings based on their interpretation of those interactions. As this theory focuses on the behavior of individuals as opposed to the collective behavior of people as a group (a macro-level approach to social theory), symbolic interactionism is considered to be a micro-level sociological theory.

The modern-day theoretical concept of symbolic interactionism is the culmination of contributions in the early 1900s from three major sociological theorists: Herbert Blumer, George Herbert Mead, and Charles Horton Cooley. In the following sections, we'll discuss each of these theorists' roles in the development of the theory. 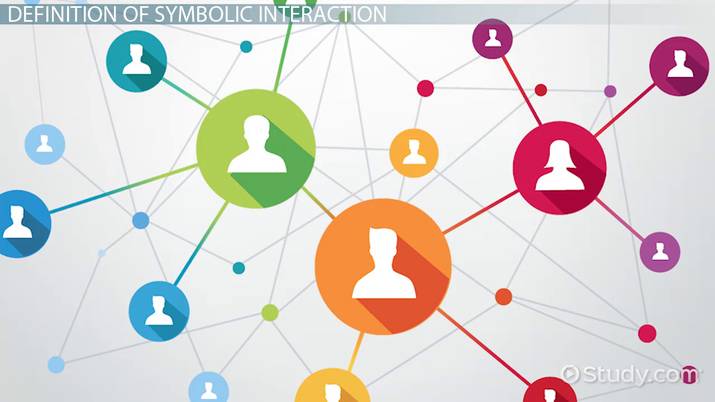 Mead's Concept of Self

George Herbert Mead laid the groundwork for symbolic interaction with his discussion about the self, which he defines as a dynamic organism that is a being of its own. The self breaks down into two processes or phases that take place in any human interaction:

Along with his friend Mead, Charles H. Cooley helped originate symbolic interaction theory. Cooley is best known for the concept of the 'looking glass self,' which Cooley illustrated with the following statement:

This means that we as individuals define how we perceive ourselves by how we think others perceive us. To put this component of the theory in perspective, consider this: It's your first day of high school. You're at lunch, holding your food tray and nervously scanning the crowd to find the best place to sit. As you find your seat, you internalize the glances you get from the students you pass at the other tables, interpreting what you think they're thinking of you based on their facial expressions, body language, and verbiage. You are, in effect, redefining who you think you are based on your interpretation of other people's reactions to you.

Herbert Blumer was actually a student of Mead, and he expanded on Mead's discussion of the self in relation to social behavior. Despite much of the groundwork being established by Mead, Blumer is traditionally known for being the brains behind the theory of symbolic interactionism. In fact, it was his work Symbolic Interactionism: Perspective and Method that synthesized his contributions with those of Mead and Cooley and coined the term symbolic interaction.

You are entering an office to interview for a job. When you arrive, the man interviewing you greets you at the door of his office with a handshake and a warm smile as he looks you straight in the eye, offers you a seat and a glass of water, and sits down behind his desk. You feel confident, right? But why? According to symbolic interactionism, you feel confident in this scenario (at least in that moment) because his smile was warm and genuine, he looked you in the eye, and you felt that his response to you was accepting. You interpreted his response to you as agreeable, because in the past when others have responded to you in the same way, the interactions were positive. So you, in turn, defined yourself in a positive way in this moment.

Let's start this interview entrance over. You walk in the room, only this time the man interviewing you barely looks up from his computer and tells you to have a seat on the opposite side of his desk. His quick glance at you in the doorway of his office seems full of annoyance. He types furiously, not saying a word as he finishes composing an email. You fumble with your portfolio and quietly fidget, hoping your clothes aren't wrinkled or your breath doesn't reek of Cheetos. He takes all of two minutes to finish the email, but it feels like hours to you. He stops typing, turns his chair to face you, and remarks, 'Okay, I've got a conference call in fifteen minutes so we'll have to make this quick.' Still feeling confident? Probably not. Why? Well, according to symbolic interactionism, nothing in his behavior indicated that he had a positive response to you, which in turn made you define yourself, in that moment, negatively.

We learned that this is a micro-level theory because it deals with individuals and their relations to groups. We discussed George Herbert Mead's concept of self as a dynamic organism that is organized into two phases: I (the unorganized response of the self to the attitudes of others) and me (a set of organized attitudes of others that the individual assumes in response). We connected this discussion to Charles H. Cooley's concept of the 'looking glass self,' which reiterates how our definition of self is constructed based on what we think others think of us. Lastly, we discussed Herbert Blumer's contribution to symbolic interactionism, which is a culmination of these two elements and adds a clarification of how individuals assign meaning to behavior based on interactions with others.

Social Interaction Theory, Social Roles & the Presentation of Self

The Race-Conflict Approach in Sociology