In literature, writers often use symbolism (an object, person, animal, color, etc. that represents an abstract idea) and imagery (descriptive language which appeals to all of the senses, adding layers of deeper meaning to a text). See examples of symbolism in works from Langston Hughes, Robert Burns, George Orwell and Kate Chopin, and examples of imagery from Langston Hughes and Sylvia Plath. Updated: 08/25/2021
Create an account

What happens to a dream deferred?
Does it dry up
like a raisin in the sun?
Or fester like a sore--
And then run?
Does it stink like rotten meat?
Or crust and sugar over--
like a syrupy sweet?
Maybe it just sags
like a heavy load.
Or does it explode?

In this poem about the African American experience during the first half of the 20th century, Langston Hughes uses objects like 'a raisin in the sun' and a 'festering sore' to describe what he thinks happens when dreams are put off or deferred. The images are powerful because they give a memorable and concrete idea of the ill effects of unrealized dreams. Writers, like Langston Hughes, frequently feature symbolism in their work, using an object, person, animal or even color to stand in for an abstract idea.

We are surrounded by symbols. The dove and yellow ribbon are just two of many symbols for peace throughout the world. In the United States, red, white and blue and the Statue of Liberty don't just symbolize America but also patriotism. Different cultures have their own symbols and symbolic meanings, so while most brides in the West wear white on their wedding day, in many Asian cultures, brides wear red, which represents good fortune. 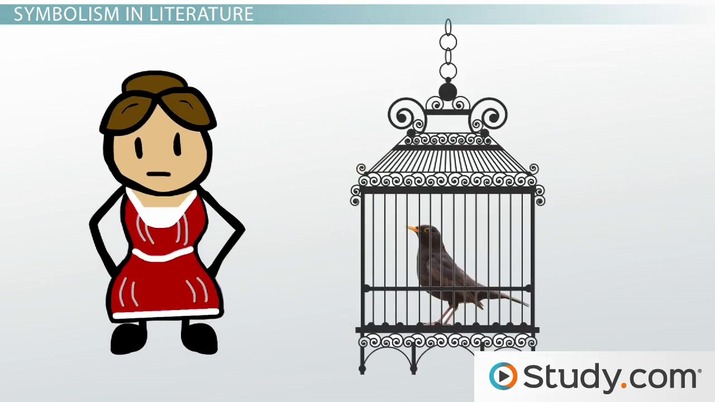 Coming up next: What is Prose? - Finding Meaning in Foreshadowing & Character

Writers use symbolism to strengthen their writing, making it more interesting and adding a layer of deeper meaning. A second grader might write, 'I love Charlie!', but experienced writers like Robert Burns, who lived from 1759 - 1796, write, 'My love is like a red, red rose.'

We don't know how exactly the second grader loves Charlie. Is he her brother? A schoolyard crush? 'A red, red rose' says a lot more because of all of the ideas a red rose symbolizes in our and Burns' culture. A red rose means romance and passionate love.

'My love is like a red, red rose' is one type of symbolism used in literature (and The Bachelor): a metaphor. A metaphor and its cousin the simile both use comparisons between two objects or ideas. In this case, by comparing 'love' and 'a red, red rose,' Burns (and The Bachelor) use the rose as a symbol for romantic love. Another important type of symbolism found in literature is the use of story elements, like plot, setting, characters or objects in the text, to symbolize something more meaningful.

Allegories, such as George Orwell's 1945 novella Animal Farm, use stories with hidden meanings to share a lesson or provide commentary on institutions like government or religion. Authors often do this by extending symbols through an entire literary work. For example, the plot of Animal Farm, where farm animals rise up against their human masters, mirrors and critiques the political events in Russia in the early 1900s, with animal characters symbolizing real-life political figures.

In a novel like Kate Chopin's The Awakening (1899), the symbolism is less obvious. The main character, Edna Pontellier, is trapped by society's expectations of women, and mothers in particular. Chopin uses birds throughout the novel - a parrot and mockingbird in a cage, a pigeon house and a bird with a broken wing - as a way to symbolize Edna's feelings of being trapped.

Think back to the Langston Hughes poem at the beginning of this lesson. Is there a particular image that stuck with you? Playwright Lorraine Hansberry was so inspired by the image of 'a raisin in the sun' as a symbol for the thwarted dreams of African Americans that she wrote a play on the topic and called it A Raisin in the Sun. First performed in 1959, A Raisin in the Sun does not have any literal raisins in the sun. Instead, it focuses on a black family living in poverty in Chicago's South Side.

Imagery is the use of descriptive language, which appeals not just to sight but to all of the senses. Imagery often makes writing more interesting through the use of sensory details and can add a layer of deeper symbolic meaning to the text. The images in the poem 'Harlem' by Langston Hughes - 'a raisin in the sun,' a 'festering sore' - make the poem more engaging and meaningful.

Author Sylvia Plath is known for her use of imagery, especially in her poetry. In the poem 'Metaphors' (1960), Plath uses several images to describe her pregnancy. The poem begins:

I'm a riddle in nine syllables,
An elephant, a ponderous house,
A melon strolling on two tendrils.
O red fruit, ivory, fine timbers!
This loaf's big with its yeasty rising.

The speaker in the poem 'Metaphors' uses several different comparisons to describe her pregnancy. While 'a riddle in nine syllables' is not a particularly vivid visual image, the line contains exactly nine syllables as well as a repetition of sounds, making it an example of auditory imagery.

'Metaphors' contains a great deal of visual imagery as well. Pregnant women are sometimes said to be 'as big as an elephant' or 'as big as a house,' images which call to mind the physical changes in their bodies. 'A melon strolling on two tendrils' is another visual image to symbolize a pregnant woman's shape, and 'O red fruit, ivory, fine timbers' is an example of 'tactile imagery,' which pertains to the sense of texture and touch.

Finally, the line 'This loaf's big with its yeasty rising' is a visual image, which is also tactile, olfactory (related to smell) and gustatory (related to taste). The use of imagery in the poem adds another level of meaning, with the comparison to the process of bread dough rising highlighting the organic, physical nature of pregnancy. The imagery makes pregnancy seem out of the speaker's control, symbolizing her complex feelings about having a baby.

In literature, symbolism is the use of objects, people or colors to represent larger ideas, adding a layer of deeper meaning to a work of art. Symbolism can range from metaphors and other comparisons - like 'a raisin in the sun' - to story elements like setting and characters - such as caged birds symbolizing feeling confined by gender roles.

Imagery is descriptive language that appeals to all the senses in order to make writing more interesting and meaningful. Imagery can be employed symbolically, such as the different imagery representing pregnancy in Sylvia Plath's poem, 'Metaphors.'

Completing this lesson should enable you to:

Outline Overview, Function & Examples | How to Write an Outline

How to Write a Strong Essay Body

Theatre of the Absurd

Symbolism Uses, Types & Examples | What is Symbolism in Literature?

A Lesson Before Dying Study Guide