In her autobiography ''I Know Why the Caged Bird Sings,'' Maya Angelou explored her life through symbolism. Learn about symbolism in literature, the Easter dress, the doll, the general store, and the towns of Stamps and San Francisco. Updated: 01/12/2022
Create an account

There are lots of ways to accomplish telling a story or conveying an idea without coming right out and saying it. That's where symbols come in. Whether in literature or in movies, symbols such as characters, objects, colors, or even household items can help the author convey deeper meaning to an idea or concept.

Maya Angelou's I Know Why the Caged Bird Sings is no exception. In fact, we can see three examples of symbolism right in the title! The bird represents freedom or desire to be free, while the cage symbolizes confinement or oppression. Even the act of singing shines a spotlight on the author's ability to grow and flourish despite her challenges.

Of course, there are many other symbols in this story, which is what brings us to this lesson. Let's take a look at a few. 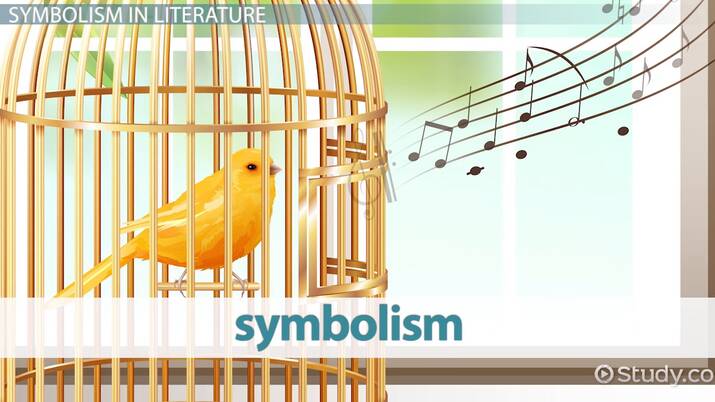 Coming up next: Parallelism in I Know Why the Caged Bird Sings

Early in the story, we find our first symbol: the Easter dress. Angelou has spent a long time dreaming about this dress's magical powers. ''I was going to look like one of the sweet little white girls who were everybody's dream of what was right with the world.''

The dress is made of lavender taffeta, yet to Angelou, the Easter dress represents transformation to her idea of beauty: being a little white girl with long, blonde hair and light-blue eyes. ''But Easter's early morning sun had shown the dress to be a plain ugly cut-down from a white woman's once-was-purple throwaway.''

The realization that the dress does not have the power to transform her is the first harsh reality the author explains to us. She cannot accept herself in her current form and expects the dress to change her into something unattainable. In reality, transformation only comes from within.

Another symbol is a doll that arrives as a Christmas gift from the mother who has abandoned Angelou. Once again, Maya struggles with the notion that beauty equals being white because the doll is white with ''blue eyes and rosy cheeks and yellow hair painted on her head.'' So, she is faced with another reminder about unattainable beauty.

But the doll also symbolizes abandonment. Up to that moment, Angelou was confident her parents were dead. Yet, the doll is a painful reminder of how they walked out of Angelou's life. She recounts, ''One Christmas we received gifts from our mother and father, who lived separately in a heaven called California, where we were told they could have all the oranges they could eat. And the sun shone all the time.''

It's fitting that just a few paragraphs later, ''Bailey and I tore the stuffing out of the doll the day after Christmas.'' Even the act of tearing apart the doll offers symbolism: the tearing apart of the relationship between mother and child.

Angelou's grandmother, Annie Henderson, owned and operated a grocery store, a place that Angelou loved. ''Until I was thirteen and left Arkansas for good, the Store was my favorite place to be. Alone and empty in the mornings, it looked like an unopened present from a stranger. Opening the front doors was pulling the ribbon off the unexpected gift.''

It goes without saying that a black woman owning a store during this period of racial tension and segregation was pretty unusual. In Angelou's mind, the general store represented the power her grandmother had not only personally but in the community. It could also be symbolic of success or strength, both ''S'' words, like the ''S'' on Superman's chest.

The store is a dominant setting in the book and provides a place for the black community to congregate. ''It became the lay center of activities in town.'' In that regard, it gives Angelou the family or sense of community that she struggled with in her parents' absence.

The town of Stamps, Arkansas, where Angelou lives during her childhood, is representative of many Southern towns at the time, which struggled with poverty, segregation, and racism.

Angelou writes, ''In Stamps the segregation was so complete that most Black children didn't really, absolutely know what whites looked like. Other than that they were different, to be dreaded, and in that dread was included the hostility of the powerless against the powerful, the poor against the rich, the worker against the worked for and the ragged against the well dressed.'' Angelou never felt safe in Stamps, so the town is symbolic of oppression, hate, and even fear.

San Francisco, on the other hand, clearly represents freedom, beauty, and even acceptance. Angelou writes, ''To me, a thirteen-year-old Black girl, stalled by the South and Southern Black life style, the city was a state of beauty and a state of freedom.''

Long before Angelou arrives in San Francisco, she had ideas about what California must be like because of her parents. San Francisco was, by far, more progressive and accepting, yet the scourge of racism was still present, which you can see in Angelou's job struggles. Still, Angelou said, ''In San Francisco, for the first time, I perceived myself as part of something.''

Various symbols throughout Maya Angelou's I Know Why the Caged Bird Sings give us insight into Angelou's mind while she was writing about her experiences. Even in the title there is symbolism: the cage of oppression, the bird of freedom, and singing the pursuit of transformation despite challenges.

Themes Quotes in I Know Why the Caged Bird Sings

Maya Angelou: I Know Why the Caged Bird Sings and Poetry

I Know Why the Caged Bird Sings Title Meaning

I Know Why the Caged Bird Sings: Analysis & Themes

Uncle Willie in I Know Why the Caged Bird Sings

An Angel in Disguise: Theme & Analysis

An Angel in Disguise: Summary & Quotes

A Lesson Before Dying Study Guide

A Rose for Emily Study Guide