A system bus in a computer is the way information travels from the central processing unit to computer memory to devices. Explore the definition and function of this system. Updated: 09/09/2021
Create an account

Okay, now that we have a basic idea of a computer system, here's what a system bus is. A system bus is kind of like all the train tracks that connect the CPU (the grand central station) with the computer memory (the houses of addressable data) and with the neat devices that let us interact (like the mouse, keyboard, screen, and audio system).

In early computer systems, all the data traveled across actual cables, which got pretty messy. Large bundles of wires were organized using bus bars, which is where the term 'bus' comes from. Nowadays, most of those wires are typically gold-plated traces (or tiny flat wires) on the computer's motherboard, a large flat surface that all the electronic stuff gets mounted to. The most critical connection of any computer system is the system bus.

Cables are still used in present-day computer systems, in particular, to connect external devices. The most common type of connection is a Universal Serial Bus (or USB), which you can probably recognize. Many peripheral devices, such as printers and scanners, use a USB connection. 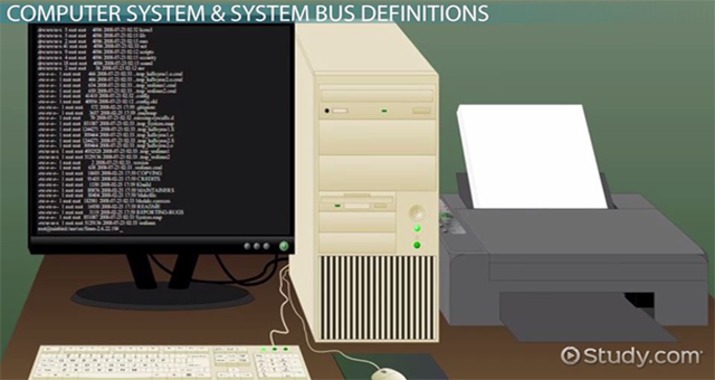 How the System Bus Works

The system bus is a little bit more complicated than a single train track, but not too much. Think of it as three rails per track, kind of like mass transit trains use. That's because each track has to carry three different things: data, address, and control.

Because of these three different types of information, the system bus actually consists of three buses.

Think of the system bus like an internal mass transportation system inside your computer, bussing data from place to place.

Here's an example. Say you want to listen to a song which is on your disk drive. That song is stored as data on that device. Somehow, that data has to get to a device in your computer that knows how to turn it into sound and then play that on your speakers. So, we specify the address of the MP3 file on the disk and the address of the sound card using the address bus. We also use the control bus to tell the song on the disk how to talk to the sound card. Now, all the traffic can get underway on the data bus, allowing the song to play until it's over. All of this is managed by the grand central station in the computer (the brains or CPU), but the system bus makes the actual transfers happen.

We should explain a few more things to really get an idea of what a system bus is like. One thing about it is the bus width. That's the number of bits that a computer bus can transfer simultaneously. Another thing is the bus speed, which keeps the computer operations running smoothly and quickly. A very fast system bus is needed so that it doesn't slow down the computer's operations. In order to improve speed, several alternatives have been developed to the single system bus design shown earlier.

Another big thing is that modern CPUs often have some memory right on the CPU chip itself, and that's called cache memory. This memory is really fast to access. When we talk about the bus for this memory, we call it the internal or back-side bus to distinguish it from the main bus, which is often called the 'front-side bus,' or FSB. Technically speaking, the front-side bus is only one part of the system bus, but the terms are often used interchangeably.

The speed of the front-side bus is an important measure of the performance of a computer. A very fast CPU and lots of main memory doesn't result in a very fast computer unless the front-side bus is also very fast. So, when buying a computer, you will often see the FSB speed reported as part of the technical specifications. This speed is reported in megahertz (MHz). A present-day CPU typically has a speed of several hundred MHz, which is plenty to keep your computer running smoothly.

The system bus connects the CPU, memory, and the input/output devices. It carries data, address, and control information. The speed of the system bus is an important part of the performance of a computer system, just like the speed of the CPU and the size of the memory.

After you've completed this lesson, you should be able to accomplish the following goals:

What is a Distributed Database? - Architecture, Principles & Advantages