Mia has taught math and science and has a Master's Degree in Secondary Teaching.

My younger cousins worked part-time jobs over the summer to save money for a car. The job paid different rates for working weekdays and weekends. During the first week, one cousin worked 22 hours during the week and one hour on the weekend, earning $232. Her sister earned $270 by working 15 hours during the week and 10 hours on the weekend. What was the hourly pay rate for working weekdays and weekends?

When solving word problems, it's important to understand what you are asked to find. This problem is asking us to find the hourly pay rate for weekdays and the hourly pay rate for weekends. We'll need to use different variables to represent each unknown. Let's use x for the weekday rate and y for the weekend rate. Now we can use the other information from the word problem to create equations that we will use to solve for the variables.

One cousin worked 22 weekday hours and one weekend hour for a total of $232. We can represent this with the equation 22x + y = 232. Using the pay for the other cousin, we get the equation 15x + 10y = 270. Since there are two equations with the same two variables, we can set them up as a system of equations and solve them simultaneously.

We now know that the hourly pay rate for weekdays is ten dollars. By substituting ten for x in one of the equations, we can solve for y. Using the revised version of the first equation, we get y = 232 - 22 (10) = 12. 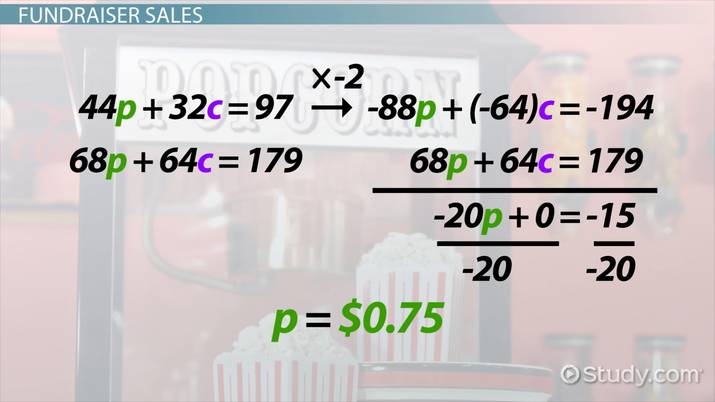 Coming up next: Consistent System of Equations: Definition & Examples

Okay, let's now go through another example using the elimination method this time.

After we add the equations together, we are left with one equation to solve, -20p = -15. We can solve for p by dividing both sides of the equation by -20. We find that the cost of one bag of popcorn is $0.75.

Now that we have solved for one variable, we can use its value to help us solve for the other value. By substituting 0.75 for p in one of the equations, we can find c, which works out like this:

So to recap, systems of equations can be used to solve word problems that have more than one unknown. If there are two unknowns, there should be two equations written based on the information in the word problem. Each equation should have the same two variables. The system of equations can be solved using methods such as the substitution method and the elimination method. The problem is solved when values for both unknown variables have been found.