What is Systems Theory? 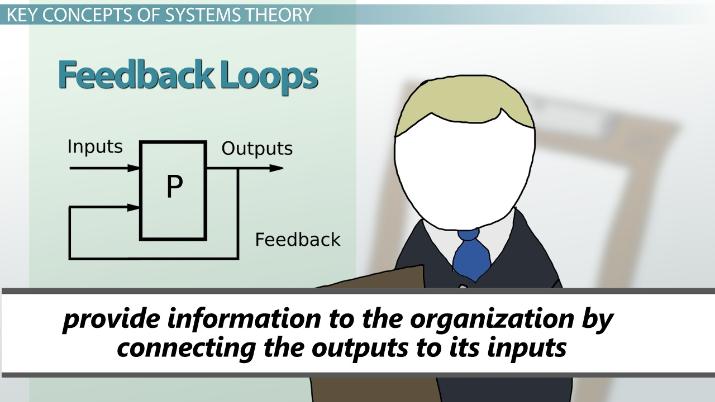 Coming up next: Political Factors in Business: Definition & Examples

In order to understand the theory, you must first get a firm understanding of a system. A system is any set of distinct parts that interact to form a complex whole. Think of the universe. Its parts are as small as a subatomic particle and as large as galactic clusters. Each part is distinct but interacts to form the universe. An organization is also a system with parts such as employees, assets, products, resources, and information that form a complex system.

An open system consists of three essential elements. An organization receives resources such as equipment, natural resources, and the work of employees, referred to as inputs. The inputs are transformed, called throughputs, and then yield products or services called outputs. Outputs are released into the environment.

Feedback loops are also an important feature of open systems. They provide information to the organization by connecting the outputs to the inputs. A negative feedback loop indicates a problem that should be corrected. For example, the failure of product design indicated by the need to recall the product.

A positive feedback loop can identify outputs that have worked well. For example, a successful marketing campaign that yields high sales. Thus, feedback loops are a means of confirming success or signaling that corrections to the system need to be made.

Finally, the role of management in an open system should be fairly clear. First, you need to manage the inputs into the organization, such as capital, natural resources, equipment, and employees. Second, you must monitor the throughputs - the use of the inputs for the creation of goods or services. Third, you need to manage the outputs into the environment - the goods and services. Finally, you must monitor for positive and negative feedback loops and make changes necessary to alleviate any negative ones.

Systems theory is one of the dominant organizational theories in management today. It treats an organization as either an open or closed system. A system is a set of distinct parts that form a complex whole. A closed system is not affected by its environment, while an open system is.