Patricia has a BSChE. She's an experienced registered nurse who has worked in various acute care areas as well as in legal nurse consulting.

Polymers are molecules composed of carbon and hydrogen made up of repeating smaller units. They can have a variety of properties, depending upon their composition and structure. Here, we will explore the tacticity of polymers. Updated: 08/11/2022
Create an account

What Is a Polymer?

You may have heard of polymers and thought that they sounded really boring, like some old plastic pipes inside of some old building. But they are truly a lot more than that! Naturally occurring polymers are found inside your body and can provide you with energy. They are also in products you use every day, from fabrics and paints to fiberglass and artificial heart valves. Some polymers are stronger than metal and take less energy to produce. So whether you think they're boring or not, they're still a huge part of your world!

Polymers can be classified according to the kinds of chains they form or according to what kind of polymerization reactions create them. Nearly all polymers have a backbone of hydrocarbon, which is a long chain of carbon and hydrogen atoms. They also have pendant groups, which are attached to the hydrocarbon backbone, hanging off of it like a pendant. These are usually a part of the repeating monomer group. 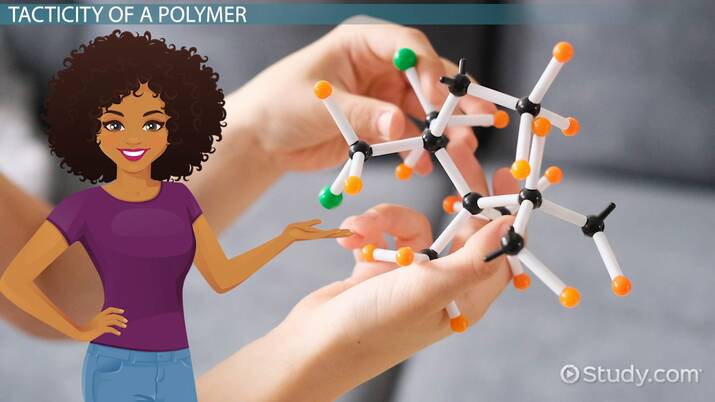 Try it now
Back
Coming up next: Asymmetric Induction: Definition, Factors & Methods

Polymers have a property that is called tacticity. Tacticity refers to the manner in which the pendant groups are arranged along the hydrocarbon chain. In reality, hydrocarbon chains are not long, flat chains lying across a surface, but are instead three-dimensional chains with some atoms projecting out of the plane.

However, they do follow a few different kinds of set patterns of chain and pendant; it is these patterns that define tacticity. Tacticity patterns are three-dimensional, which means that the pendant groups may not only be on the opposite side of a hydrocarbon chain, but they may also be in a different spatial orientation. Even so, flat images are sometimes used to depict tacticity to simplify the ideas.

The tacticity of a polymer is an important consideration because it affects its physical and chemical properties. There are three different types of tacticity in polymers, which are isotactic, syndiotactic, and atactic. However, one polymer may have more than one tacticity at a different location along the polymer chain. It all depends upon the local conditions to which the polymer is exposed, as well as the proximity to other reactive pendant chains.

Ziegler-Natta polymerization is a method of polymerization developed by two scientists named (you guessed it!) Ziegler and Natta. It is used to make isotactic polypropylene. The rather complex process involves a transition metal catalyst that forms a system to begin the polymerization. Isotactic polypropylene is an extremely useful, highly crystallized substance that has many important applications. From dishwasher-safe containers to gas pipelines, this polymer is seen almost everywhere.

The metallocene catalysis vinyl polymerization process can be adjusted to make either isotactic or syndiotactic polymers. This process is catalyzed by metallocenes, which are positively charged metal ions located between two negatively charged cyclopentadienyl anions. The final polymer product has some metal atoms in the backbone chain. Metallocene catalysis vinyl polymerization produces Kevlar, which is used to make bullet-proof vests. These huge, strong polymer molecules have molecular weights in the millions of grams per mole.

A polymer is a large molecule made up of repeating chains of smaller molecules, which are called monomers. Polymers occur naturally and may also be synthesized. Polymers have a backbone of hydrocarbon, which is a long chain of hydrogen and carbon atoms. They also have pendant groups, which are attached to the backbone chain.

Tacticity is a property of polymers that refers to the manner in which pendant groups are arranged along the hydrocarbon chain. Polymers are three-dimensional but are often depicted as flat on a page for simplicity.

The three different types of tacticity in polymers are:

Polymers are produced by several different processes. Three common ones are:

Polymers are often huge molecules and can have molecular weights of millions of grams per mole.

Chromophore Overview & Examples | What is a Chromophore?