A tadpole is the larval stage of an amphibian and is characterized by a large head, rounded body, and long tail. Learn more about the tadpole, and explore the changes in the tadpole stages. Updated: 01/19/2022
Create an account

What Is a Tadpole?

It is a life form that starts out like a blob, then slowly it changes. Its tail vanishes, it develops lungs, and legs sprout out of its body. No, this isn't some horror movie. . . it's biology! Specifically, the biology of tadpole development.

A tadpole is a stage in the lifecycle of amphibians, like frogs. The tadpole is a larval stage, or a period in the life cycle of some animals where the offspring look nothing like the adult. A tadpole lives almost entirely in the water, although there are some amphibian species where the tadpole can survive on land. Remember, the tadpole does not look like the adult, and must undergo a series of physical changes, called metamorphosis, before it becomes an adult. Let's check out how a tadpole becomes a frog. 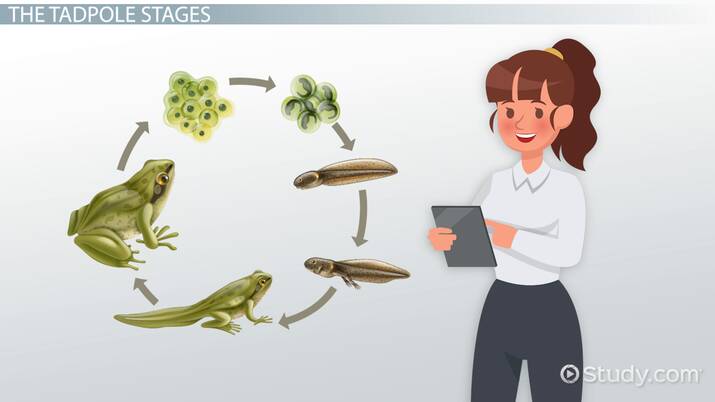 We will focus on frogs, but other amphibians also have a tadpole larval stage. Tadpoles have a tail and fin-like structures as well as gills, so they can breathe underwater. After a series of changes, the tadpole will eventually turn into a frog, and it should be noted that these stages are variable depending on the species.

The eggs are laid in a gelatinous mass, and eventually, as the eggs develop, you can see a tiny tadpole-like critter inside of the egg. Of course it depends on the species, but most eggs hatch after about 6 to 21 days.

Right after hatching, the tadpoles are most at risk of being eaten. In an attempt to reduce predation, they affix themselves to weeds and try to blend in with their environment. Instead of swimming around looking for food, they get their nutrients from remnants of the egg, which, conveniently, is already in their belly.

At around 4 weeks, the tadpole's diet can diversify to include more plants and possibly small insects. This is mainly due to the development of teeth, as well as the guts of the animal becoming more complex. Skin slowly starts to cover the gills as the tadpole will utilize lungs instead of gills by the time it becomes an adult.

From weeks 5 to 9, the tadpole begins to sprout legs and its body starts to look more frog-like and less tadpole-like. The tadpole may begin to consume larger insects.

At around week 12, the tadpole looks like a frog with a tail. Some people refer to this stage as a froglet. The froglet can leave the water as their lungs are functional.

Between weeks 13 and 16 the frog has completed the tadpole stage and is now an adult frog.

All right, let's take a quick moment to recap the important information that we've learned. While legs sprouting out of a blob-like body sounds horrifying, it's just one of many stages in the life of a tadpole, which is the larval stage of amphibians, like frogs. Remember, the larval stage is just a phase in the life cycle of some animals where they look nothing like the adult. Through a series of changes, known as metamorphosis, the larva eventually becomes an adult. Let's review the changes that take place for a tadpole to become a frog:

Life Cycle of a Toad: Lesson for Kids