Simona received her PhD in Applied Mathematics in 2010 and is a college professor teaching undergraduate mathematics courses.

View bio
The Taylor series is defined as a representation of a function used in mathematics. Learn the formula for the Taylor series, understand the role of the offset term, and practice examples of using the Taylor series to verify derivatives. Updated: 10/22/2021
Create an account

What Is the Taylor Series?

World politics can be complicated. Distant economies change dramatically. Far away populations move their centers. Sometimes, it's better to focus on what is happening locally. The same may be said for complicated mathematical expressions. By looking at the localized behavior of a function, we can often gain amazing insights. This is where the Taylor series is really useful. Simply put, the Taylor series is a representation of a function that can help us do mathematics. Uses of the Taylor series include analytic derivations and approximations of functions.

If we have a function which we can differentiate, then we can express that function as a Taylor series with the formula you're looking at on your screen right now.

Here are a few comments about notation and other particulars for this series. First of all, the derivative could be written as the formula you're now looking at on your screen:

This is telling us to differentiate with respect to x and then to substitute the x variable with the a variable. We have not completely eliminated the x variable; it still appears in the Taylor series formulation, only the x in the derivative gets replaced by a. There is also a factorial notation, which is shown by the exclamation point. It means, n! = n(n - 1)(n - 2) and so on. For example, 3! = 3(2)(1) = 6.

Although the Taylor series has an infinite number of terms, we often keep only a few terms. How many terms we keep is determined by knowing the convergence of the series. Basically, convergence means that as we include more and more terms, the sum of terms is not growing without bounds. A series may not converge. Analyzing how and if a series converges will tell us the values of x over which this series is valid. 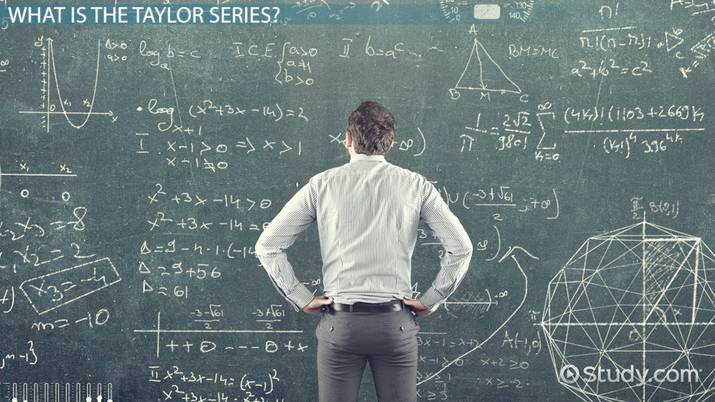 Try it now
Back
Coming up next: How to Use the Second Derivative Test

Making Sense of the Offset Term

Let's determine the Taylor series for a particular function. Then we will plot a few terms to help us make sense of the a term. Consider the following function:

From the Taylor series formula we see that we need derivatives of f(x). To make this easier, we write the following:

Then, the first derivative is:

And the second derivative of f2(x) equals:

Our Taylor series for this function, about the point a, is thus the following:

Let's say that we would like to match our curves at and near the point a = -0.5. In the following plot, the dark line is the desired function. The colored curve is the sum of only the first three terms of the Taylor series for a = -0.5. Note that f(x) is plotted as y in this and subsequent figures:

With this change, we have a much better match at x = 0. Thus, we can focus where we would like the best match to occur by selecting the value for a to be at or near that point. The a = 0 location is special. There is considerable interest in the Taylor series near the origin. Let's use our example to show why this is true. If we go back to our Taylor series for this example and let a = 0, we get:

The derivative of the sine function gives us the cosine function. This identity can be proven by first writing the Taylor series for sin(x). We will let a = 0 to simplify the analysis. Then we will differentiate this series term by term. The resulting series will be the Taylor series for cos(x). For f(x) = sin(x), we can prepare our work by listing some derivatives like the ones on your screen right now:

Substituting this information into our Taylor series formula gives us the formula that you're now looking at on your screen, which converges for all values of x:

To verify our trig derivative identity, let's say that we have already worked out or are given that the Taylor series for cos(x) can be what you're now looking at on your screen, which is for all values of x.

Now, differentiate each term of the sin(x) Taylor series and observe the results:

We have used the Taylor series to verify that the derivative of sin(x) is cos(x).

The Taylor series of a differentiable function, f(x) about an offset term a is given by the following series

A Taylor series is convergent if the sum of infinitely many terms is a finite number. To determine the convergence of a series, we usually apply a convergence test, like the ratio test.

Taylor series are used to approximate complex functions with polynomial functions, which are much easier to differentiate and integrate. The only disadvantage is that the function may be approximated with the Taylor series on a restrictive domain, the interval of convergence of the series.

For example, the exponential function is represented by the Taylor series around zero for any x, because the interval of convergence is the entire real axis,

To see how Taylor series is used to do algebra easier, we will evaluate the integral

with Taylor series, because it is challenging to obtain an antiderivative of the exponential function

2) Integrate the first three terms and the general term of the Taylor series obtained in 1).

3) Write the Taylor series around zero of the given integral.

An antiderivative of the general term is

3. The general antiderivative of the given exponential function is