Understanding the ethics and rituals of Confucianism is to explore a deeper understanding of the ideology. Learn about the concept of Te, including the background, teachings of the Analects and the Five Classics, and the role of Chun-Tzu and rituals. Updated: 10/03/2021
Create an account

In order for us to understand the Confucian concept of Te, we're going to need some background information. For this reason, a good part of this lesson will deal with the origins of Confucius thought. However, before we get to that, I'll give the definition of Te, so you can sort of mull it over as you listen.

Te, sometimes also spelled De, is defined as moral power or the perfection of one's virtues. Also, it almost always refers to a ruler or a nobleman. Although this may seem a bit odd to those of us from the Western world, I promise it will make more sense as we get into some background information. With that promise, let's dive in. 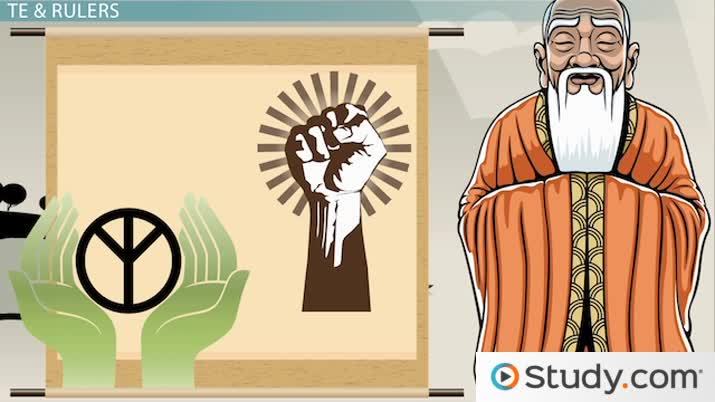 Try it now
Back
Coming up next: The Ancestor Cult and the Dual Soul

Unlike the more Western faiths of Judaism or Christianity, Confucianism does not teach the worship of any particular deity. Instead, it focuses more on human behavior, especially the behavior of the ruling classes. In fact, much of the Analects, or the collection of Confucius' teachings, deal with this subject. Many concepts on human behavior are also found in the Five Classics, another of Confucianism's early texts.

Many scholars believe this emphasis on human behavior is a direct result of the time in which Confucius lived. Being born sometime around the year 551 BCE, Confucius lived in China during the decline of the feudal system, a system of power based on land ownership. This decline led to a period of great instability as feudal lords and the nobility were unable to protect themselves or the common man against invasion, and warring tribes began tearing apart the old established order of Chinese society.

In fact, many sources report that Confucius' own family, which had once been members of the aristocracy, had lost their wealth and position of power during this very unstable time. Seeing the ills which had captured his society, Confucius, who although poor was rather well educated, longed for his lands to be restored.

To Confucius, peace would only come when rulers longed for peace over power. In short, he believed that in order for a society to succeed, it must be governed righteously. Rulers must live by a very strict moral code, holding tightly to the virtues of humility and benevolence. From this great emphasis on rulers was born the Confucian principle of Te.

As defined earlier, Te is moral power or the perfection of one's virtues. Very loosely translated, it's almost seen as a supernatural power that gives someone the ability to say no to temptation and evil. Going with this very, very loose translation, those who were believed to possess Te were sort of seen as moral superheroes.

Because of this, Te is seen as a prerequisite for the position of ruler. Without it, a leader will fall into greed and degrade into power mongering. A leader must possess Te in order to rule justly and benevolently, which, of course, is his duty and obligation. In fact, a ruler or nobleman who possesses Te and the other virtues of Confucianism is often referred to as a Chun-tzu, which we can translate as the superior or ideal man. Adding to this, a ruler's role is not only to govern but to be a good example. He is to be one worthy of being imitated.

One way in which he is to be an example is the carrying out of ritual. The most important of these rituals is that of Filial Piety, or deep respect of one's elders. In this practice, a ruler was expected to respect his elderly family members. However, this did not end at death. In fact, a ruler was expected to regularly make sacrifices to the deceased, continuing to place himself under their authority even after their death. This is in sharp contrast to many leaders who refuse to submit to any authority or rule, let alone someone who is dead! However, this is exactly what Confucianism prescribed in order for a ruler to be worthy of imitation and honor.

In short, a ruler who possesses Te will lead by example, even to the point of placing himself under the authority of the elderly and the dead. When he does this, people will follow. And as they follow, their society will be transformed into one of peace, harmony and virtue.

Almost always referring to a ruler or one of noble birth, the virtue of Te is central to the teachings of early Confucianism. The concept is found in the Analects, or the collection of Confucius' teachings, as well as the Five Classics, another of Confucianism's early texts.

Translated as moral perfection or the perfection of one's virtues, many scholars feel its importance was birthed from the turbulent and violent times in which Confucius lived. It was a time in which the powerful were warring, while the common man suffered.

Seeing the ills of his society, Confucius longed for a benevolent ruler who would uphold the ancient virtues while also continuing to honor his cultural customs. This was especially important in reference to the ancient ritual of Filial Piety, or deep respect of one's elders.

While Te denotes goodness and moral power, it also denotes one who is worthy of imitation. Known in Confucianism as a Chun-tzu, a leader possessing Te is considered a superior or ideal man.

When this lesson has been completed, you might possess the capacity to:

Te: The Ethics and Rituals of Confucianism
Related Study Materials