Hsun-tzu is known for disagreeing with Mencius and Confucianism teachings. Explore Hsun-tzu's take on concepts such as Jen, Li, ritualistic practices, and the inherent evilness of man. Updated: 10/04/2021
Create an account

Although most of us have never heard his name, Hsun-tzu is considered one of the most important architects of Confucianism. In fact, he's probably in line right behind Confucius and Mencius when it comes to the role he played in forming modern-day Confucian thought. Ironically however, his main views are diametrically opposed to those of both Confucius and Mencius, especially when it comes to the nature of man.

With all that being said, we also have to acknowledge that much of what is known about these three men is rather nebulous, with many historians disagreeing over dates, philosophies and even meanings. For this reason, we're going to keep things really simple and general. Since even scholars can't quite agree on the details, there is really just one main thing I want you to come away with in the end.

Here it is: unlike Confucius, and especially Mencius, Hsun-tzu thought the nature of man was inherently evil. If you can keep this in mind, you'll be in great shape. Now, on to some background information. 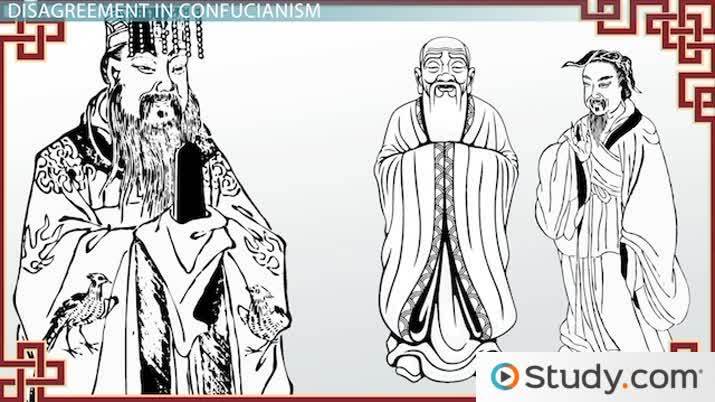 Try it now
Back
Coming up next: Tung Chung-shu: Confucianism in the Han Dynasty

For starters, being born sometime around the year 551 BCE, Confucius, the actual founder of Confucianism, lived in China during the decline of the feudal system, a system of power based on land ownership. This decline led to a period of great instability because feudal lords and the nobility were unable to protect themselves or the common man against invasion, and warring tribes began tearing apart the old established order of Chinese society.

Seeing the ills that had captured his society, Confucius, who although poor was rather well educated, longed for his lands to be restored. To Confucius, peace would only come when rulers longed for peace over power.

In short, he believed that in order for a society to succeed, it must be governed righteously. Rulers must live by a very strict moral code, holding tightly to the virtues of humility and benevolence. Adding to this, he believed that leaders were endowed with almost a supernatural power to be benevolent and good. They simply needed to use it. Known as Te, this moral power or the perfection of one's virtues came to shape much of Confucian thought.

When Mencius came along and began interpreting the Analects, or the teachings of Confucius, he picked up on the idea of moral goodness and began to add to it. Taking it a step further, Mencius, the most famous interpreter of Confucius' teachings, asserted that human nature was fundamentally good, not evil. Known as the idealized form of Confucianism, Mencius argued that there is inherent goodness in all people. In fact, most scholars believe it was actually Mencius, and not Confucius, who came up with Confucianism's central concept of Jen. Sometimes also spelled as Ren, Jen, simply stated, is the desire to seek the good of others.

Taking this belief in human goodness even a step further, Mencius believed that a heaven of sorts was present within every human's heart. To him, it was every person's job to grasp and understand this heaven living within them.

However, and quite unfortunately for both Confucius and Mencius, they lived and taught during a very turbulent era in China's history, a time when various war lords were fighting for power while the common man suffered. With this in mind, it's not hard to understand why many people found their belief in the inherent goodness of man a pretty hard pill to swallow.

And this brings us to Hsun-tzu, probably one of the most famous guys who just couldn't swallow the whole 'humans are inherently good' idea. Like I said earlier, being born sometime between 310-220 BCE, Hsun-tzu is considered one of the most important framers of the Confucian faith. In fact, many scholars feel he did a better job of explaining and defending Confucianism than even Confucius or Mencius.

However, unlike these two, Hsun-tzu believed man was inherently evil. As some have put it, he believed that all of humanity lacked a moral compass and was, therefore, always in danger of spiraling into disorder, corruption and violence.

To remedy this, he believed that humans must continually choose to be good. Since it will never come naturally, humans must, just like athletes, practice being good in order to be good. With this theory, it's interesting to note that Hsun-tzu put little to no emphasis on the idea of some supreme deity guiding humans toward goodness. On the contrary, he believed it was up to humans, and humans alone, to practice goodness. There was no pixie dust to be sprinkled or magical forces in the wind. Goodness would only come through practice and perseverance.

Some scholars assert that, rather than focusing on Jen, or the desire to seek the good of others, Hsun-tzu focused more on the Confucian concept of Li. Differing from Jen, Li deals with one's outward social behavior. Translated as both 'propriety' and 'ritual,' Li is sometimes thought of as the working out of Jen in one's life. To use some common Western phrasing, it's sort of like putting your money where your mouth is or giving feet to what you believe. It's one thing to talk about being good; it's another thing to actually be good. Because Li focuses more on outward behavior, it is linked with accepted etiquette, customs, rituals, practice and perseverance.

With this idea of practice and perseverance, Hsun-tzu took it a step further and developed a rather organized ethical system of ritual and practice. To him, humanity could only be saved from evil by ritual, or formal prescribed procedures being continually practiced. Helping to earn Confucianism the nickname the Ritual Religion, Hsun-tzu put a huge emphasis on ritual. For instance, he held firmly to the ancient ritual of filial piety, or the deep respect of one's elders. So deep was this respect that it even required daily sacrifices to deceased relatives. However, Hsun-tzu's belief in ritual not only dealt with the family or one's personal life; it extended into the public areas of politics, education and pretty much every aspect of societal life.

Being known as the guy who disagreed with Confucius and Mencius, Hsun-tzu is considered one of the most important architects of Confucian thought.

Living during the decline of feudalism in China, Confucius and Mencius believed that humans were basically good and that Jen, or the desire to seek the good of others, could be found in all of humanity. To them, society would only be healed when leaders and the common man turned back to their natural state of goodness. Many of these beliefs are found in the Analects, or the teachings of Confucius.

Unlike these two famous men, Hsun-tzu had a different take on things. In fact, he asserted that man's nature was inherently evil. To him, a person must practice goodness. Without this practice, society will fall into corruption and violence.

Aligning a bit more with the Confucian ideal of Li, or propriety and ritual, Hsun-tzu focused more on outward social behavior. This focus led him to believe that man will only be saved from evil by continually practicing goodness through perseverance and ritual. One of the most important of these rituals was filial piety, or deep respect of one's elders. So deep was this respect that it even required daily sacrifice to deceased relatives.

With this idea of ritual and perseverance, Hsun-tzu didn't stop with an individual's personal life. His belief in the importance of ritual led him to develop an organized ethical system, for not only the individual but also for the realm of politics and education.

Mencius & the Mandate of Heaven | Who is Mencius?

Similarities Between The Lottery & The Hunger Games

What is Human Nature? | Examples & Theories

"The Allegory of the Cave" by Plato | Summary & Symbolism

Factors that Affect Ethical Behavior in the Workplace

Mencius & the Mandate of Heaven | Who is Mencius?

Similarities Between The Lottery & The Hunger Games

What is Human Nature? | Examples & Theories

"The Allegory of the Cave" by Plato | Summary & Symbolism

Factors that Affect Ethical Behavior in the Workplace