Imaging techniques and pathology allow psychologists to study the brain and behavior. Explore these techniques including EEG, PET and CAT scans, MRI and fMRI, and DTI and learn about pathology. Updated: 10/06/2021
Create an account

Brian loves brains. He's fascinated by how our brain can make us do things, even without our control. For example, every time he smells lavender, Brian's brain conjures memories of his Nana. He doesn't have to try to think about her; she just pops in his head!

Brian is a psychologist who studies how our brains influence our behavior. For example, one of his patients was in a bad car accident and hit the side of her head. As a result of the injury, she has trouble speaking and understanding what people are saying to her.

Psychologists, like Brian, are interested in how the brain works to guide human behavior. But it's a pretty complicated job! The human brain is not labeled. If Brian opened up his patient's head and looked at her brain, he wouldn't see a little sign that said, 'This section controls language,' or one that said, 'This section controls problem-solving.'

As a result, psychologists have to get a little creative to study the link between brain and behavior. Specifically, they look at how a person acts and what different parts of a person's brain are doing. Essentially, they create a link between observed behavior and observations of the person's brain.

Let's look closer at two techniques that Brian and psychologists like him can use to study the link between brain and behavior: imaging and pathology. 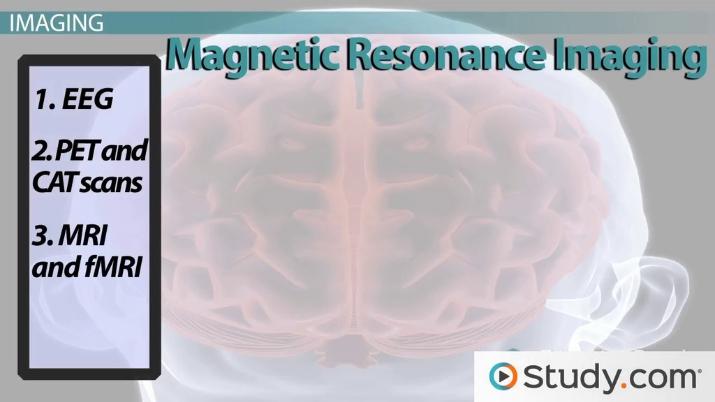 Coming up next: The Central and Peripheral Nervous Systems

Brian is lucky that he lives in modern times because there are many ways to look at a person's brain without actually opening up his or her head. For example, let's say that he wants to take a look at his patient's brain to see what's going on that's affecting her language skills.

It used to be that Brian would only have one option to look at his patient's brain: to cut open her skull and look at it. Because this is a dangerous technique, this was usually done after the patient died. So, Brian would have learned about the brain in general but not learn how to help this particular patient.

EEG stands for electroencephalography, and it involves measuring electrical activity along the scalp of a person. The readout for an EEG session looks like a bunch of squiggly lines and allows Brian and others like him to see which general areas of the brain have the most going on. For example, he might do an EEG and see that his patient has very little activity on the left side of her brain. That might help him understand that her problems spring from some sort of damage to that area.

A PET scan is a positron emission tomography, which takes an image of activity in the brain by tracing small amounts of radioactive matter that are injected into a person, and a CAT scan is a computed axial tomography, which is essentially a 3-dimensional X-ray of a person's brain. Sometimes, these two things are combined together.

PET and CAT scans used to be the normal way for psychologists, like Brian, to look at their patients' brains. But they are not used as much anymore because there are better techniques to measure brain activity.

Diffusion tensor imaging is still pretty new, but it's becoming more and more popular. Whereas an fMRI looks at brain activity on the surface of the brain, DTI examines the deep-down white matter of the brain, which links areas of the brain to one another.

If all that sounds confusing to you, don't stress out. Remember that all of these methods, from EEG to DTI, are doing the same thing: they are trying to look at brain activity to see how it affects a person's behavior.

Sometimes, psychologists, like Brian, look at a bunch of healthy people's brain scans to figure out how a healthy brain works. For example, Brian might put a bunch of people in an MRI machine and ask them to read words or answer questions while he scans their brain to get an fMRI image. He might notice that almost all of them have increased activity on the left side of the brain while doing these activities, which would tell him that the language centers of the brain are on the left side.

Historically, psychologists looked at the pathology of a person only by examining their brains during autopsy. For example, Brian knows that his patient has problems with language. After she died, he could remove and examine her brain to see where the damage to the brain was.

Regardless of when he examines his patient, the basic idea is that Brian can either study people with healthy brains or people with pathological brains. Either way, he's trying to get at the answer to the question, 'How does the brain influence this specific behavior?'

Many psychologists are interested in studying the way the brain influences a person's behavior. Brain imaging allows a scientist to see an image of brain activity and comes in many forms, like EEG, which measures electrical activity; PET and CAT scans, which measure activity in a brain through tracing radioactive chemicals and/or taking 3-D X-rays; MRI and fMRI, which measure activity on the surface of the brain using magnets; and DTI, which measures activity in the white matter of the brain. Regardless of the technique, a psychologist can either examine the brain of healthy individuals or that of individuals with a pathology to better understand the link between brain and behavior.

Techniques to Study the Brain and Behavior
Related Study Materials

How Goals Contribute to Well-Being

Brain Scan Uses, Types & Images | What is a Brain Scan?