The changes in seasons and climates are the major factors that affect the temperature ranges of a region. Learn about temperature ranges, review the definition of climate, and explore different climates such as the tundra, arid, tropical, and temperate climates. Updated: 11/10/2021
Create an account

Sammy Celsius is here to help you learn about climates and temperatures throughout the world. But why Sammy Celsius? Why not Frankie Fahrenheit? Well, most of the world uses the Celsius temperature scale. I know, I know, the United States uses Fahrenheit, but scientists, even those in the United States, primarily use Celsius, so we're going to use that scale in this lesson. 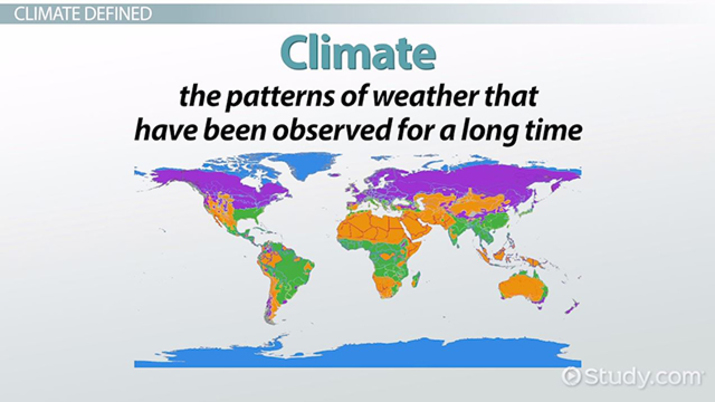 The word 'climate' gets thrown around a lot, and it's often used in place of other words like 'temperature' and 'weather.' Since this lesson is going to be focusing on climate and temperature, it's worth taking a moment to get some definitions under our belt. Weather is what you observe occurring in the atmosphere that may be rain, snow, or clouds. Climate refers to the patterns of weather that have been observed for a long time. In order to examine climate, one must follow the weather patterns and seasons over many, many years. Finally, temperature refers to how much heat energy is contained in a substance and can be measured using a thermometer, like Sammy.

The first climate we're going to examine is the tundra, or the climate that is characterized by cold temperatures, limited precipitation, and areas of permafrost, or permanently frozen ground.

There are two types of tundra: arctic and alpine. But we are going to focus on arctic, which can be found surrounding the North Pole. You might not be familiar with arctic tundra, but it actually makes up 20% of the Earth's surface.

Since we have Sammy here, let's talk about the temperatures found in the tundra, which vary dramatically depending on the season. Unlike latitudes that are further south, the tundra climate is characterized by two seasons: summer and winter. Although there are spring and fall seasons, they're extremely short.

Due to its proximity to the North Pole, the winters are dark and cold with average temperatures of -34 degrees C. Wow! -34 as an average! Yikes! I'd hate to see a cold day! Summers, on the other hand, have almost constant daylight and temperatures ranging from 3-12 degrees C.

The weather patterns vary depending on the season, but it's often dry and windy. In fact, tundra is often referred to as a cold desert. I don't know about you, but Sammy is getting cold, so let's head south to a different climate.

In addition, both areas receive little precipitation. In fact, arid climates are defined as areas that receive less than ten inches of precipitation per year.

Tropical climates are located near the equator. In fact, this climate can be found 15 to 25 degrees north and south of the equator, and they make up 6 to 7% of the Earth's surface. They are also characterized by heavy precipitation. For example, they average 400 inches per year! Whoa! Better put on a raincoat, Sammy. Speaking of which, what does the temperature look like here, Sammy? Okay, it looks like the average temperature is 21 to 30 degrees C. Hey, that's near room temperature! If it wasn't so wet, this place would be great!

And, like the other climates we've touched on, the tropical climates don't have the typical seasons. In fact, due to the proximity to the equator, the temperature and length of day remains fairly constant throughout the year. Okay, it looks like we have time to visit one more climate.

This climate doesn't have the extremes we've seen with the other climates. For example, it isn't really dry like the arid or really wet like the tropical climates. So, temperate climates tend to be considered mild.

These climates can be located at latitudes between 40 degrees and 70 degrees north and south of the equator. Unlike the other climates mentioned, temperate climates are characterized by four seasons. So, Sammy, what are the temperatures in the temperate climate? Oh? Okay, averages are about 31 degrees C, but we'll have to travel because they vary? Gotcha.

Let's start by checking out the temperate grasslands, where the temperature varies greatly from season to season. For example, according to Sammy, summers can get highs of 38 degrees C, but winters can get down to a frigid -40 degrees C. Wow, that doesn't sound all that mild to me! Brrrr!

Thanks to Sammy, we were able to check out the temperatures within many different climates around the world, including tundra, arid, tropical, and temperate.

Remember, Sammy measured temperature in each region. Temperature measures the heat energy in a substance, and climate looks at the temperature and weather patterns over a long period of time. Scientists, and most of the world, use the Celsius scale to measure temperature, so that is why we relied on Sammy Celsius and not Frankie Fahrenheit.

We learned that tundra is located near the North Pole, is dry, and has extremes between summer and winter. Arid climates are also dry but located further south. Tropical climates are near the equator and have a lot of precipitation, but not much temperature fluctuation between seasons. Finally, temperate climates tends to have moderate weather, with more rain than tundra or arid but less than tropical. It also has more variation between seasons.

Thanks, Sammy! That was fun. And, although we didn't cover every climate on the Earth, take a moment today and try to figure out which of these four climates your area has.

After you finish here, you'll know how to:

What Are Glaciers? - Definition, Types & Processes

Solar Energy Concept & Effects | How Does the Sun Heat the Earth?

Lines of Latitude with Examples | What is Latitude?

What is Weather? - Lesson for Kids

What are Convection Currents? - Definition & Examples

What Are Cyclones? - Types, Causes & Effects

How to Round to 2 Decimal Places in Java