Are you interested in understanding what happens when we recognize new information and patterns? This lesson discusses a host of theories to help you understand pattern recognition and the human learning process. Updated: 10/31/2020
Create an account

What Is Pattern Recognition?

Juliette is fascinated by the way peoples' minds work, learn, and process new information. She's studying to become a teacher, and she's more and more interested in how new ideas and information are acquired. Recently, Juliette has realized that people generally sort new information according to what is already available in their minds, but she thinks this might happen in a number of different ways. 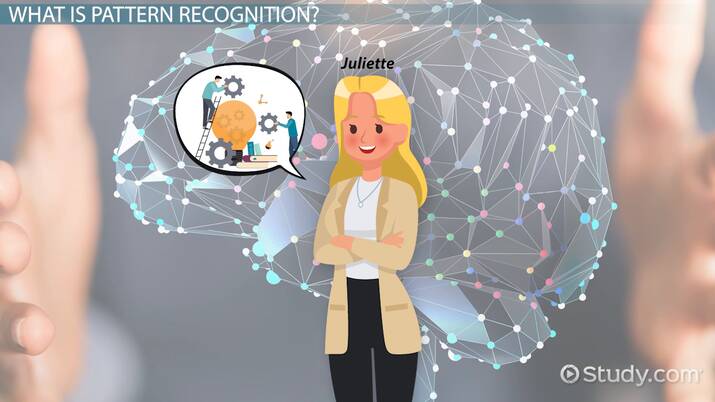 Coming up next: Pattern Recognition through Feature Analysis & Configurational Systems

Top-down theories state that we perceive things based on our expectations of those things. For example, if Juliette chooses to walk into a bookstore, she would expect to see rows and stacks of books. Her concept of a bookstore would inform her perception.

Bottom-down theories state that we take little details from our surroundings and them combine in certain ways to form a perception. Juliette would see the rectangular shapes of the books, the lighting, edges and other factors and then make the conclusion that she was seeing stacked books. Each of the theories Juliette learns about shows one way that new information is received and synthesized with prior understandings.

First, Juliette learns about template matching, often thought of as the most basic form of pattern recognition. Template matching is a theory of perception that assumes that people form templates for every object they see or interact with.

For instance, the first time Juliette saw a cat, she formed a template in her mind for what a cat looks like. She formed a separate template the first time she saw a dog. Then, every new thing a person encounters is perceived and recognized based on the extent to which it matches with a previously formed template. Each time Juliette sees a dog or cat in the world, she is quickly recognizing them based on the fact that they fit into her mental template for the animal in question.

Juliette finds that template matching is a helpful theory for understanding how past experience and exposure can impact our perception. However, she wonders what this theory would say about how we integrate and understand objects and experiences that are wholly new to us.

Juliette starts to learn more about feature analysis theory, which understands perception and recognition as processes rooted in the interactions between our brains and the outside world. Feature analysis theorizes the possibility that humans and animals have neurons and neural networks that function as detectors, observing the individual characteristics, or features, of every object and pattern we encounter. In our previous example of the cat, these neurons are interacting with the different stimuli provided by the cat itself.

For instance, we perceive features like color, shape, size, and texture. Rather than fitting these features into a previously existing template, feature analysis theory surmises that we neurologically encode the features to summarize and understand what we are looking at or interacting with. Juliette sees the cat's fur, paws, whiskers, ears, and tail and finds the ''whole'' to be a cat. Feature analysis theory also functions at a higher and more complex level, as our feature detectors become attuned and responsive to increasingly complex features, or features that repeat in complicated ways.

Juliette learns that recognition-by-components theory is another aspect of feature analysis where features of the object or pattern get sorted into their component parts as a way of recognizing them. The components are understood as three-dimensional shapes called geons.

The theory holds that there are fewer than 36 possible geons, and all objects are composed of these in different iterations and compositional structures. When we recognize an object, according to this theory, we pay attention to edges and concavities.

So, when Juliette looks at a cat, she automatically breaks it down into its cylindrical body, the way the body meets with the conical tail, and so on. Together, these components help her form a pattern that she can then perceive for what it is: a cat.

Finally, Juliette learns about prototype matching theory, which explains that when we look at objects from a particular category, we recognize some of them as prototypes more readily than others. For example, when Juliette thinks about cats, she is more likely to think about a house cat than, for instance, a lynx. A house cat is sort of her ''default'' cat, or the most cat-like thing she think of. Thus, when we work on recognizing something in a particular category, we start with the prototype member of the category and then move in a more sophisticated direction, toward the nuanced and less common category members.

When Juliette sees a lynx, according to this theory, she compares it with the previously stored prototype of a cat. She doesn't need an exact match, in fact, her mind expects a mismatch. These discrepancies make this model a bit more forgiving than the template model. In prototype matching, Juliette doesn't need any one specific feature to perceive it, but a match is higher the more features fit the prototype.

Pattern recognition refers to how the mind acknowledges and assimilates new information. A wide variety of perceptual theories are available to help us understand when we look at objects and recognize the different patterns they do and do not contain. Top-down theories state that we perceive things based on our expectations of those things, while bottom-down theories argue that we put the little details from our surroundings and then combine them into a perception.

Template analysis assumes that people form templates for every object they see or interact with and, therefore, fit what we see into what we already know. Feature analysis argues that we observe individual characteristics, or features, of every object and pattern we encounter. Recognition-by-components theory maintains that we sort objects into their component parts as a way of recognizing them. These components are understood as three-dimensional shapes called geons. Prototype theory describes our likelihood to categorize members of a group first by their prototype, and then into more detailed and less common subgroups.

Detailed Structures of the Eyeball