View bio
Texture and voices in music can be thick with many different parts or thin with a few different parts. Learn about the definition of texture and get an overview of the three specific types of texture: monophony, polyphony, and homophony. Updated: 08/25/2021
Create an account

Think of your favorite song. Most likely you're thinking of the singer and the lyrics of the song or possibly the catchy drum beat. But what other instruments are involved that make the song sound the way it does? Why are background instruments important? The answer to these questions is texture. 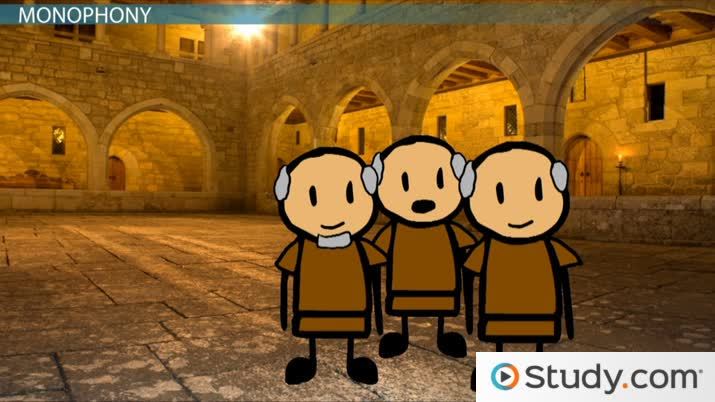 Believe it or not, you hear texture in music all the time. Generally, we think of texture as being a word reserved for describing tactile applications, like the shagginess of carpet or the fabric of your favorite shirt, or for visual applications, like the thickness of paint on a canvas. However, we can apply texture in an aural way as well. In music, texture refers to the interaction of melodies and harmonies within a song. These parts can be instruments, singers, or a combination of both.

In general, the texture of music can be thin or thick, thin texture being music with few differing musical parts and thick texture being music with many differing musical parts. We can think of texture like a sandwich. The more ingredients you put on your sandwich, the more flavors you will taste in one bite. A grilled cheese sandwich might represent a thin texture, while a sub sandwich with ham, turkey, roast beef, cheese, lettuce, tomato, onion, mayo, and spices could represent a thick texture. Thin and thick textures are often woven throughout a song, and it is this weaving that helps create intensity and drive or calm and relaxation within a piece of music.

When we want to describe music more precisely, we can refer to three specific textures: monophony, polyphony, and homophony. The names of the textures were derived from Latin, with the prefixes giving structural implications and the suffix '-phony', meaning 'to sound.' This is not to be confused with the word 'phony,' meaning 'fake' or 'fraudulent.' Let's examine each to find their similarities and differences.

Monophony is the thinnest of the three textures, with only one musical part in a song. The prefix 'mono' means 'one,' like a monocle or monorail, so it's easy to remember. In monophony, there are no background singers or instruments. Historically, monophony was the first texture. During the Medieval period, this was the only texture of music accepted by the church, as harmony was considered the work of the devil.

The most well-known type of Medieval monophony is Gregorian chant. If you listen carefully, you can hear that, although there are multiple singers, they are all singing the same pitches in rhythm together. This is monophony because there is only a single line of music with no accompaniment. Another example is at the beginning of Beethoven's 'Fifth Symphony.' All violins, violas, cellos, and basses are playing the same tones and the same rhythms. You might have noticed that the violins are playing at a higher frequency than the cellos or basses, but because they are playing the same pitch, it is still considered monophony. Finally, you can often hear monophony at the beginning of sporting events, where soloists will sing the national anthem without background instruments.

Eventually, singing the same thing as everyone else all the time became boring. Thus, polyphony was born. You probably know that 'poly' means 'many,' like a polygon has many sides, and since we know 'phony' means 'to sound,' we can immediately deduce a basic meaning of 'many sounds at the same time.' More specifically, polyphony is heard when two or more independent melodies are sung or played simultaneously. In polyphony, the pitches and rhythms of each musical part are different from one another. Because of this, we can say that polyphony is a much thicker texture than monophony.

Think of a round, like 'Row, Row, Row Your Boat.' If you and your friend are singing the song as a round, you are singing two different parts at the same time. Many times, an instance of polyphony is achieved through singing, though it can occur between two or more instruments as well. This happens most often in orchestral or band music. A very common example often heard at wedding ceremonies is Pachelbel's 'Canon.' Part of the beauty of the song is the interplay between the four simultaneous melodies.

Many classical trios and quartets also play with a polyphonic texture, at least some of the time. In Beethoven's 'String Quartet,' we hear the violin, viola, and cello playing individual yet complementary parts. More current examples include The Beach Boys, who often combine multiple melodies in the vocal parts of their songs, and in pop song divas who feel the need to improvise over the chorus of the song while the main melody continues along with her.

It is debated when and where polyphony first started being used. Pythagoras wrote about harmony as early as 500 B.C.E. However, the most commonly used theory, at least in Western music history courses, is that polyphony developed in the mid-Medieval period, sometime around the year 800. There is written evidence of polyphonic music from the late Medieval period sometime around the year 900, and polyphony developed from there, reaching commonplace status in the late 1100s.

The French composer Leonin of the Notre Dame Cathedral and his student, Perotin, are generally credited with composing the first significant polyphonic music and creating plausible guidelines for creating polyphonic music. The heyday of polyphonic singing occurred during the Renaissance, when four-part singing was an extremely common way of making music. Polyphony grew to new extremes in the Baroque period and was called 'counterpoint.' Counterpoint is a more complicated version of the polyphony we usually hear and is very complex. For an example, listen to J.S. Bach's 'The Well-Tempered Clavier.' Even though it is on a single instrument, there are four parts being played, combining to create an intricate piece of music.

As it turns out, the textural preference for the last 100 or more years has been neither for monophony nor polyphony but for the third texture - homophony. Because 'homo' means 'the same,' we can figure out that at least two of the parts in a homophonic piece of music will be the same or, more likely, very similar. Many times, the rhythms of the parts will be the same, but the pitches will differ. In this way, the parts work together to form harmony through chords.

Many chamber group pieces, like trios or quartets, often utilize the homophonic texture. Barbershop quartets are a great example of homophonic texture because each of the four men sing their own part to create harmony. There is a variation of homophony called 'melody-dominated homophony,' where several parts act as the background support of chords and rhythm while a melody is provided by another instrument or singer. You can think of it like the groove and the melody. It's like when you're singing karaoke - you are the main focus, and the instrumental track is there to provide you with context and background. The thousands of YouTube videos of someone playing guitar and singing their favorite cover song is yet another example of melody-dominated homophony.

Like polyphony, the homophonic texture first evolved in the Medieval period, this time as slightly harmonized hymns. Using homophony on a deeper level gained popularity during the Baroque period in the 17th century and continues to dominate popular music of many genres today, including rock and hip hop styles.

In all, texture can help us appreciate the intricacies in a piece of music. Thin-textured, or monophonic music, is purely melody, while the more thickly-textured homophony and polyphony include accompaniment or complementary melodies, respectively. While the Medieval church was initially resistant to harmony, it soon embraced the sonorous qualities of homophony and polyphony. Even 1,200 years later, we still use these textures today in nearly all forms of popular music.

After viewing this video, a student should be able to:

For this activity, you will respond to the following questions about texture in music and the history of different musical textures. For each question in this set, write at least 2-3 complete sentences. Some of the questions have multiple parts, so make sure that you completely answer all aspects of each question. Also, keep in mind that some of these questions may require additional research.

A Possible Response to Question #1:

How to Get Kids Excited for Physical Activity

What is Timbre in Music? - Definition & Examples

What is Melody? - Lesson for Kids

What Is Harmony in Music? - Definition & Theory