Thalassemia is an inherited blood disorder associated with an abnormal production of hemoglobin. It results in symptoms of anemia and exists as two main types: alpha and beta. Learn about the different types of thalassemia and how they are treated.
Create an account

How long can you hold your breath? Even with a little practice, you might find it challenging to hold your breath for more than a minute. By that time, your body is looking to get more oxygen in and get rid of carbon dioxide. The gasping for air that you instinctually do after holding your breath leaves no doubt that your body needs to continually circulate these gases between your body and lungs.

This circulation is the job of hemoglobin, which is an iron-rich protein inside your red blood cells. In a person with thalassemia, there's a problem with hemoglobin. Thalassemia is an inherited blood disorder characterized by an abnormal production of hemoglobin.

Because the disorder results in less hemoglobin and may also involve fewer red blood cells, symptoms of thalassemia are like those we would expect to see in a person with anemia, such as fatigue, pale skin, jaundice and slowed growth in children. In this lesson, we will take a look at some of the significant aspects of thalassemia, including the different types and treatment options. 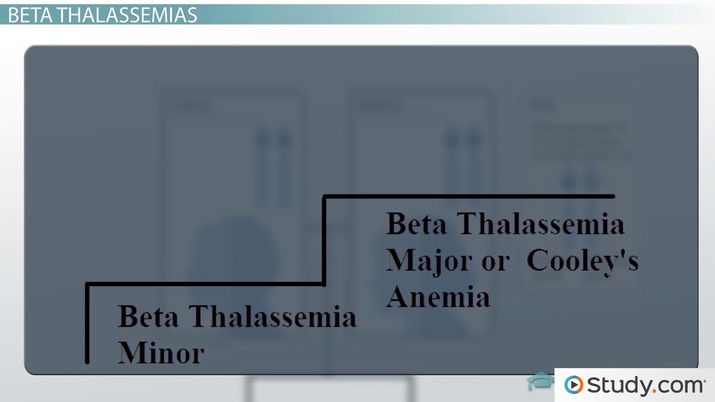 Coming up next: Hereditary Spherocytosis: Causes and Symptoms

Cause and Alpha Thalassemias

Thalassemia is an inherited disorder, which means that it is passed down from parent to child through genes. You are most likely to be at risk if you are of Mediterranean, Middle Eastern, Asian or African descent.

In addition, we see that the more the gene is mutated, the more severe the symptoms. Let's start by looking at alpha thalassemias, which are blood disorders that develop if one or more of the four alpha chain genes are missing or mutated. So we see that with alpha protein chains, there are four genes involved. You get two of these genes from your mother and two from your father. The more that are missing, the more severe your symptoms, as if you are climbing a ladder of severity.

For example, if you are born with only one gene missing, then you are on the first step of alpha thalessemia, known as a silent carrier. Silent carriers have this one little flaw, but it is not enough to produce symptoms, so their symptoms are 'silent.'

If you have two genes missing, then your symptoms move up to the second step and you are said to have a condition called alpha thalassemia minor. Being minor, as you may have guessed, produces minor symptoms of anemia.

If we go one more step and have three genes missing, then your anemia will be moderate to severe and you have something called hemoglobin H disease. The 'H' describes the abnormal hemoglobin. To help remember that this level of alpha thalassemia has very noticeable symptoms, you might want to think of a person with hemoglobin H disease as having a scarlet letter 'H' around their neck, much like the scarlet letter 'A,' which was made famous in the 1850 novel by Nathaniel Hawthorne.

The highest step would be a very rare condition with all four genes missing. This condition is called alpha thalassemia major or hydrops fetalis. The term 'fetalis' refers to 'fetus,' and this fact can help you remember this term because when all four genes involved in making the alpha protein chain are missing, the symptoms are too major to overcome and the fetus dies.

With beta thalassemias, we have blood disorders that develop if one or both of the beta chain genes are mutated. So we see that with beta protein chains, there are only two genes involved. You get one from each parent. So the ladder of severity for beta thalassemia has only two steps.

If you are born with only one gene mutated, then you are on the first stair step of beta thalessemia, known as beta thalassemia minor. Much like its counterpart, alpha thalassemia minor, this condition results in minor symptoms of anemia.

If you have both genes mutated, then you are said to have beta thalassemia major. This is also called Cooley's anemia, but there is nothing 'cool' about having this genetic disorder because you will likely develop major symptoms of anemia.

So we see that there are varying degrees of symptoms based on the type of thalassemia that presents. Treatment of thalassemia will depend on the severity of symptoms. If you have a mild form of either alpha or beta thalassemia, then you may have no noticeable symptoms and therefore require no treatment.

We mentioned earlier in this lesson that hemoglobin is an iron-rich protein. The body of a patient undergoing regular blood transfusions can easily get overloaded with iron. The body does not have a natural way of excreting this excess iron, and if it is left alone, it deposits in the body and damages organs.

Therefore, a patient that undergoes frequent blood transfusions will also need iron chelation therapy, which removes excess iron from the body. I guess you could say that iron 'chelation' (pronounced 'key-lation') is the 'key' to successful blood transfusions.

There is no real cure for thalassemia other than a bone marrow transplant. This can cure the condition because bone marrow is the site where red blood cells are made; therefore a transplant of healthy bone marrow will produce healthy cells. However, this cure is reserved for only the most severe cases due to the fact that the procedure is very risky and it is difficult to find a suitable donor.

Thalassemia is an inherited blood disorder characterized by an abnormal production of hemoglobin. Specifically, there are genetic mutations that change the way the body makes the alpha and beta protein chains that make up hemoglobin.

Treatment of thalassemia will depend on the severity of symptoms. Mild forms may require no treatment. Moderate to severe forms will require regular blood transfusions to maintain normal hemoglobin levels along with iron chelation therapy, which removes excess iron from the body that can build up from the frequent transfusions. Bone marrow transplant offers some hope for a cure, but this procedure is risky and it is challenging to find a suitable donor.

The end result of completing this lesson could be your ability to:

Bleeding Out: ITP and Wiskott-Aldrich Syndrome

What Is Pernicious Anemia? - The Loss of Intrinsic Factor