The 14th Amendment dictates that states cannot discriminate against groups of people and must uphold the law equally to all. This amendment mandates equal treatment for minority students and students with disabilities within the realm of education. Learn more about the impact the 14th Amendment has had on education and how it brought an end to segregation within schools. Updated: 10/01/2021
Create an account

Elizabeth Eckford just wanted to get a good education. She wanted to go to Little Rock Central High School in her hometown, but she couldn't because she was black and Little Rock Central was all-white. Education for all people is so much a fundamental part of our society today that we can sometimes forget that it wasn't always that way. For many years, minority students weren't educated at all, and when they were educated, they were forced to go to schools that were subpar when compared to the all-white schools, like Elizabeth Eckford. 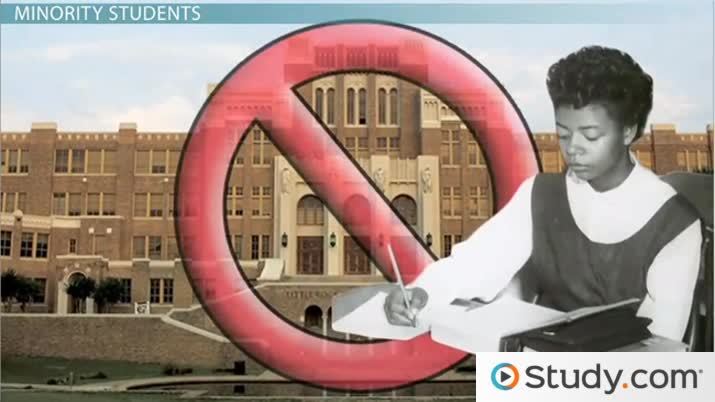 Coming up next: The Freedmen's Bureau's Impact on Education

For nearly a century after the Civil War, black and white students in the American South attended separate schools. Segregation meant that many, many students just like Elizabeth Eckford had no choice in which schools they attended. Black schools were woefully underfunded compared to white schools, and students weren't able to transfer in to the all-white schools that would provide them with more opportunities.

All that began to change in 1954 when the landmark Supreme Court case Brown v. the Board of Education applied the Fourteenth Amendment to education to declare that school segregation is illegal. As the case was argued, having separate schools for whites and blacks meant that the law was being applied differently to different groups of people. It was against the Fourteenth Amendment.

When the Supreme Court agreed that segregation was illegal under the Fourteenth Amendment, schools throughout the South began to integrate. Elizabeth Eckford did end up going to Little Rock Central High School, along with eight other black students, in the 1957 school year. But Brown v. the Board of Education isn't the only case where minority students have received benefits thanks to the Fourteenth Amendment.

In 1982, a school district in Texas began to charge the children of undocumented workers, most of them immigrants from Mexico, to attend public school. In Plyler v. Doe, the Supreme Court found that the children of undocumented immigrants had the right to attend public school free of charge, just like any other children in the U.S. Again, the courts decided that the Fourteenth Amendment meant that states could not have different education rules for different groups.

By the 1970s, segregation based on race was no longer a legal practice. Students of all races sat in the same classes in the same schools together. But there was still segregation in public schools; students with disabilities were often put into segregated classes or even segregated schools, away from the non-disabled students. Inspired by Brown v. the Board of Education, two major cases, PARC v. Pennsylvania and Mills v. Board of Education, fought for children with disabilities to be given equal rights and integrated into mainstream classrooms.

The Fourteenth Amendment of the Constitution says that states must apply the law equally to all citizens and that states cannot discriminate against individuals or groups of people. Though not specifically about education, the Fourteenth Amendment has had a large impact on education, first through desegregation of schools thanks to Brown v. the Board of Education and Plyler v. Doe, and, later, through putting students with disabilities in the least restrictive environment, thanks to PARC v. Pennsylvania and Mills v. the Board of Education, which both helped contribute to the passing of the Individuals with Disabilities Education Act, or IDEA for short.

Review this video lesson in preparation to:

Board of Education of the Hendrick Hudson Central School District v. Rowley in 1982

Mills v. Board of Education of District of Columbia: Summary & Significance

A Nation At Risk: Summary & Effects on Education

Literacy Instruction in the Elementary School