The 30 Years' War ended with the Peace of Westphalia and the diminished power of the Habsburg Dynasty. Learn about this war between Catholics and Protestants by following a timeline of its four phases: Bohemian, Danish, Swedish, and French. Updated: 03/14/2022
Create an account

The 30 Years' War, which took place in the first half of the 17th century, is one of the most devastating wars in European history. Though the war took place mainly within modern-day Germany, many of Europe's nations were involved.

Like many wars of its time period, the 30 Years' War had its root in politics and religion. From the religious point of view, this war was the Catholic attempt to overcome Protestantism. On the political side, it was the Habsburg Dynasty's attempt to keep control while many other countries worked to rob them of it.

As we study this continent-consuming conflict, it's important to note I'll use the terms Habsburg Dynasty and Holy Roman Empire interchangeably. I'll do this simply because the Habsburgs dominated the Holy Roman Empire at the onset of the war. For those of you who are unfamiliar with the Holy Roman Empire, it consisted of Central Europe. Although parts of Italy and Hungary were under its control, its center of power was the areas of Germany and Austria.

Since the 30 Years' War included so many countries warring against the Holy Roman Empire, it is usually divided into four phases. Since this war was an epic fight for power, we'll call these phases rounds. They'll be Round 1: The Bohemian Phase, Round 2: The Danish Phase, Round 3: The Swedish Phase, and Round 4: The French Phase. By the time we're finished, we'll understand why the 30 Years' War was one of the most devastating conflicts of European history. 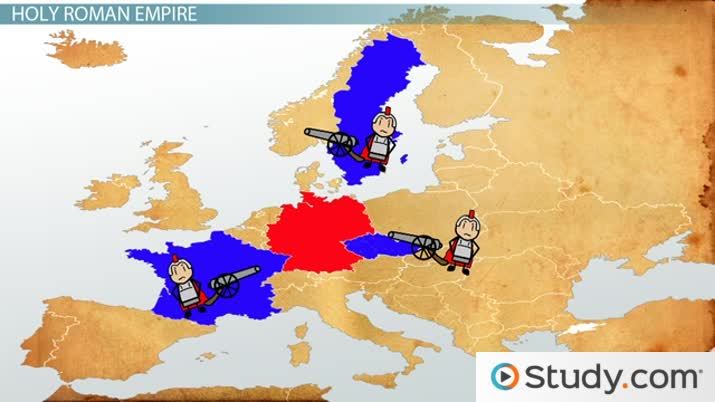 Try it now
Back
Coming up next: Religious Warfare Across Europe During the Reformation

Round #1 - The Bohemian Phase

The first round of the 30 Years' War pitted Bohemia against the Holy Roman Empire and a few of its German states. Unfortunately for the Bohemians, they were outnumbered from the start.

In 1617, Ferdinand of the staunchly Catholic Habsburg Dynasty took the throne of Bohemia, now the modern-day Czech Republic. Upon taking the throne, he moved to weaken the power of Protestantism within the land. This quickly angered the members of the Bohemian nobility, who were mostly of the Protestant faith. In 1618, the Protestant Bohemian revolt began when Protestant rebels threw a few Catholic officials from the window of a government building. Surprisingly, the royal officials were not seriously injured. However, this incident, which became known as the Defenestration of Prague, marked the opening of the 30 Years' War. To quell the rebellion, Ferdinand, also known as the Holy Roman Emperor Ferdinand II, enlisted the help of his German states. However, only the states that were loyal to Catholicism joined the fight. The Holy Roman Empire and the Catholic states invaded Bohemia and squelched the rebellion. With this, the Bohemian phase of the 30 Years' War ended in a victory for Catholicism and the Habsburgs of the Holy Roman Empire.

Round #2 - The Danish Phase

The Danish phase of the 30 Years' War saw the Holy Roman Empire mixing it up with Denmark. Christian IV, Denmark's Protestant king, felt Ferdinand II was a threat to Protestants everywhere. In 1625, Christian IV went to war against the Empire. This time, the German states loyal to Protestantism joined Denmark's cause. Adding to this, France got in on the action by financially backing Denmark.

France's willingness to financially back Protestant Denmark signaled a shift in the 30 Years' War. France was a Catholic nation who had no desire to see Protestantism grow. However, since they disliked the Habsburg Dynasty even more than they disliked Protestants, they supported the Protestants in order to curb Habsburg power. In other words, their motivation was political, not religious.

Backed by German Protestants and money from France, the Danish Protestants made some headway. However, the Empire struck back, sweeping through Germany and handing the Protestants a defeat. Although Christian IV was able to keep Denmark, the Danish Phase of the 30 Years' War ended in another victory for Catholicism and the Habsburgs.

Round #3 - The Swedish Phase

The Habsburg victories over Bohemia and Denmark scared Protestants all across Europe. Afraid of where the Habsburgs might strike next, Sweden decided to go on the offensive. In 1630, Swedish troops moved into Germany. They were aided by the remaining German Protestants. Adding to this, France again threw its financial support behind Protestant Sweden.

During the early stages of the conflict, the Swedes won several notable victories. However, when Sweden's king was killed in battle, the Protestant forces fell into confusion. This gave the Holy Roman Empire the chance to make up for lost ground. When the Empire dealt the Swedes a decisive defeat in southern Germany, both sides met to negotiate peace. In 1635, the Swedish phase came to an end with the Peace of Prague. Within this peace treaty, three main things were established. First, it offered protection to Protestants living in northern Germany. Oddly, this didn't extend to the Protestants in the south. Second, it combined the armies of the Holy Roman Empire and the German states into one. Third, it forbade German princes to ally with each other or any foreign power.

Round #4 - The French Phase

Although the Peace of Prague ended the Swedish phase of the war, it sparked the French phase. France felt the Peace of Prague gave way too much power to the Habsburgs. Since part of the Holy Roman Empire bordered France, they would not tolerate a growing Habsburg power.

In 1636, France invaded Germany. With France officially joining the fight, the Swedes decided to once again join them. With France and Sweden on one side and the Holy Roman Empire and its Catholic members on the other, the war waged on. Like the Swedish phase of the war, both sides traded victories back and forth.

Fortunately for war-torn Europe, Emperor Ferdinand II died in 1637 and was succeeded by his son, Ferdinand III. Unlike his father, Ferdinand III wanted peace to be achieved. Although peace negotiations did begin, fighting waged on for years.

Finally, in 1648, a Swedish general entered Prague and captured the city. This was the last battle of the 30 Years' War. Ironically, the conflict would end in Prague, the place it had begun when a few rebellious Protestants threw some Catholic officials out a window.

With the falling of Prague to Swedish forces, the Peace of Westphalia officially ended the 30 Years' War. As a series of treaties, the Peace of Westphalia ended a political and religious struggle that included much of Europe. Although no winner was openly crowned, Westphalia definitely favored the enemies of the Empire. Under this peace, the German states were given the right to make alliances with whomever they pleased. It also allowed for German Protestants, whether Lutheran or Calvinist, to exist within Germany. Perhaps even more significant, the 30 Years' War brought an end to the Habsburg Dynasty's domination of Central Europe. With the Peace of Westphalia, the Habsburgs had to say goodbye to their dream of a unified, Catholic empire.

Although this seems like a happy ending for Protestantism within the Empire and Germany, it came at a very high price. Since most of the war was actually fought on German soil, its land and population were devastated. Although the all-consuming power of the Habsburg Dynasty was curtailed, it would take Germany generations to recover from the 30 Years' War.

The 30 Years' War, which took place in the first half of the 17th century, is one of the most devastating wars in European history. Though the war took place mainly within modern-day Germany, many of Europe's nations were involved.

Throughout this conflict, the Habsburg rulers of the Holy Roman Empire sought to unify much of Central Europe under the Catholic faith. However, countries like Denmark, Sweden, and even Catholic France were not willing to let this occur. What ensued was a series of conflicts that would devastate German lands and see the deaths of many Europeans.

After years of bloodshed and war, the Peace of Westphalia would signal the end of the 30 Years' War. Under this peace, German princes were given the right to create political alliances outside the Holy Roman Empire. It also allowed for different sects of Protestantism to exist within the German states. Perhaps most significant, the end of the 30 Years' War saw the weakening of the Habsburg Dynasty's strong grip on Central Europe.

Upon completion of the lesson, you should be able to:

Try it now
Back
Create an account
The 30 Years' War: Catholics vs. Protestants
Start today. Try it now
History 101: Western Civilization I

Catholics vs. Protestants in Europe and the New World

The French Wars of Religion | History, Timeline & Cause

Habsburg Family Dynasty & Empire | Who were the Habsburgs?