The 4 Major Geological Subsystems of Earth

Think about a forest, a garden, or a farm. How do you think the soil in these areas was created? Soil is something we take for granted and we don't often think of how it was formed. The formation of soil is actually quite complex and requires the involvement of all four major geological subsystems of Earth, which are the atmosphere, hydrosphere, biosphere, and geosphere.

Now that we know what the four major geological subsystems of Earth are, let's look at how they are each involved in the formation of soil. At its base, soil is a mixture of decomposed organic matter and broken down rock. The organic matter in soil is a result of decaying plants, which are living organisms and are found in the biosphere. The disintegrated rocks in soil originate from the geosphere. The air in the atmosphere and the water in the hydrosphere are responsible for breaking down the rock into smaller pieces. Without the proper functioning of all four major geological subsystems, it would not be possible to produce soil. Soil is everywhere around us and it is evidence that these subsystems are constantly working to provide the Earth what it needs to survive. 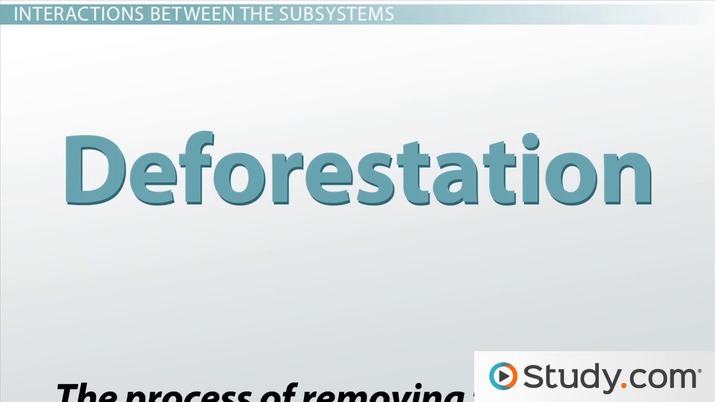 Try it now
Back
Coming up next: Outer Core of the Earth: Definition, Composition & Facts

Interactions Between the Subsystems

An example of an interaction between the geosphere and the hydrosphere would be the creation of a tsunami. Tsunamis are created when a large volume of water is displaced due to a disturbance under the water such as a landslide, earthquake, or volcanic eruption. The disturbance that causes the tsunami takes place within the geosphere and the water that is displaced is within the hydrosphere. When large waves from the tsunami hit the shore, the hydrosphere is interacting a second time with the geosphere. The water is often strong enough to cause damage to the solid earth.

There are also interactions that occur between subsystems as a result of human activities. For example, deforestation, which is the process of removing forest to use the land for other purposes, has a large impact on the major geological subsystems. When trees are cut and forests are cleared, the biosphere is being directly impacted. Not only are living trees being killed, but the other living organisms in the forest are being displaced or potentially harmed by the removal of the trees.

Although it is easiest to see the impact on the biosphere, there are also impacts to the other subsystems. The atmosphere is influenced because with fewer trees, there will be less conversion of carbon dioxide to oxygen. The geosphere is impacted because trees work as anchors in the land and when they are removed, there is an increased risk of landslides and soil erosion. Finally, the hydrosphere is impacted because without trees holding soil in place, the sediment washes into waterways and builds up. This accumulation of sediment in streams and rivers can drastically change the dynamics of the ecosystem. Also, without trees to soak up water in the ground, there is also increased risk of flooding.

These examples of interactions between the subsystems of the Earth demonstrate how complex the natural processes are. They also show how these interactions occur in cycles. When a change occurs in one subsystem, it sparks a change in one or more of the other subsystems. The subsystems are all connected and rely on each other to function properly.

The four major subsystems of Earth are responsible for many natural events and rely on each other to help ensure the Earth functions properly.

Once you are done with this lesson, you should be able to:

Geosphere Overview & Facts | What Is the Geosphere?

Extraction and Processing of Minerals & the Environmental Impacts of Mineral Use

What is Magmatism? - Definition, Process & Types

Biosphere Role, Facts & Examples | What is the Biosphere?

Nebular Theory Overview & Examples | How Did the Solar System Form?