Conducting oneself with integrity is important in everyday life, and even more so in business. Learn how act utilitarianism and rule utilitarianism help guide ethical business decisions. Updated: 11/09/2021
Create an account

Imagine that you work for the IT department at a company. You are working late at night on a project that your boss needs to see the next morning. To finish the project, you need some data, but you realize that the employee with the data, Tony, has forgotten to send it to you. Tony is gone for the evening and can't send you the information. You know that the information you need is on Tony's computer, and you're pretty sure you could guess Tony's password to log into his computer. Should you do it? Or is it unethical to break into someone else's computer?

Ethical dilemmas like this one occur every day in the business world. There are many different ways to approach ethics. One such way is utilitarianism, or the belief that the most ethical course of action is the one that provides the greatest benefit to the most number of people. 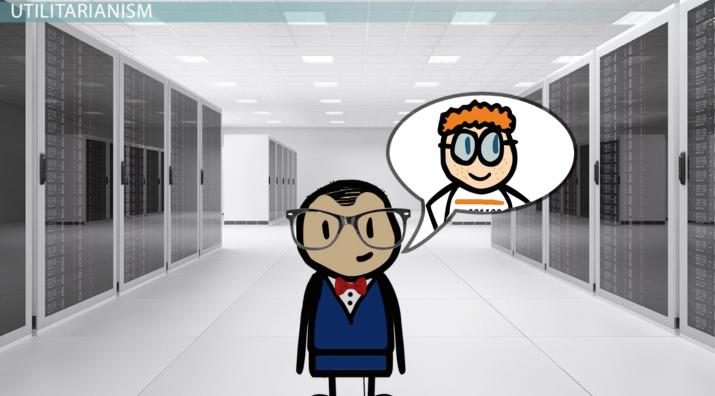 Coming up next: The Social Contract in Business Ethics

So, you're not sure whether to break into Tony's computer and get the data you need. On one hand, if you don't, then your project won't be done. This means that your boss won't be able to see it in the morning like he's asked to. It's bad enough that your boss might then be angry at you, but in addition, if your boss can't see your project in the morning, it could mess up the schedule of the entire department and your company could lose a lot of money. That could lead to lay-offs.

On the other hand, Tony's computer is his computer. If you break into it, you're violating his privacy. What should you do?

Act utilitarianism looks at each situation independently and evaluates each dilemma according to utilitarian principles. For example, when you look at your ethical dilemma, it's clear that getting the project done on time will cause the least amount of harm compared with protecting Tony's privacy. His privacy compared to people's jobs? No contest!

All that sounds pretty good, but not everyone will institute utilitarianism for every ethical dilemma they face. Some people will just act selfishly or impetuously and not take time to think about things.

That's where rule utilitarianism comes into effect. Rule utilitarianism sets rules or laws based on what the most ethical thing is in most situations. In other words, you might ask yourself, 'In a situation like this one, what is usually the outcome that will cause the most benefit to the most people, and how can we set a rule to make sure people choose that outcome?'

Let's go back to your work dilemma. Rule utilitarianism would look at the act of breaking into someone's computer and say, 'Most of the time, that will cause harm to people, so we should have a rule against breaking into others' computers.' In that case, if you don't follow the rule, you are not acting ethically. So even though breaking into Tony's computer in this one case might be better, according to rule utilitarianism, you still should not do it.

An understanding of this lesson will contribute to your capacity to:

What is Stakeholder Theory? - Definition & Ethics

The Ethics of Bribery in Global Marketing

An Employee's Ethical Obligation to an Organization

Deontology Examples | What is Deontology?

Arguments For & Against Moral Relativism