During World War I, society and life were changed for Americans across the country. Learn about the home front during WWI, the process of gathering support for the war, the roles of women, and the social changes and threats to civil liberties that took place. Updated: 11/30/2021
Create an account

What Was The Great War?

We're all probably familiar in some sense with the concept of war. However, only one war in recent American and European history has been named The Great War. It was considered at the time to be 'The war to end all wars;' many called it a threat to civilization itself. We refer to this war as World War I (WWI) today because of a subsequent war that would ignite about two decades later. 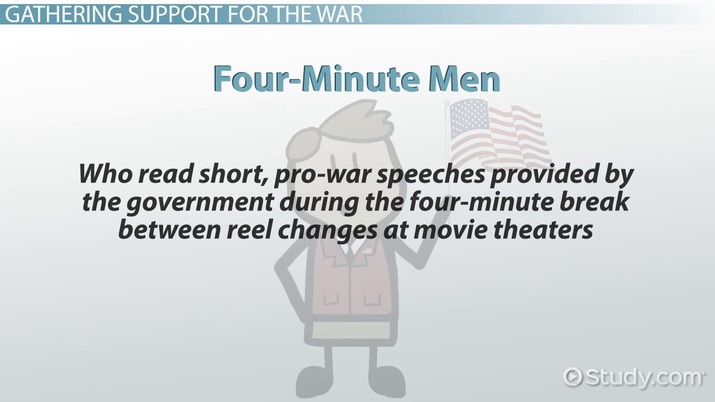 Coming up next: End of WWI: the Treaty of Versailles & the League of Nations

Gathering Support for the War

Winning the war was not a job for American soldiers alone. Because World War I was such an immense conflict, the entire economy had to be refocused on the war effort. The shift from producing consumer goods to producing war supplies was too complicated and important a job for private industry to handle on its own, so business and government collaborated in the effort. In the process, the power of government was greatly expanded. Congress gave President Wilson direct control over much of the economy, including the power to fix prices and to regulate - even to nationalize - certain war-related industries. Average citizens also played their part by agreeing to a meatless day of the week and by planting 'victory gardens' in their yards. These efforts, along with others, helped send the Allied forces overseas a large amount of food and supplies.

To encourage citizens to support the war, the government was extremely adept at producing propaganda that would persuade people to help out with the war effort at home. The government managed this by getting the nation's artists and advertising agencies to create thousands of paintings, posters, cartoons, and sculptures promoting the war. The government also recruited people called Four-Minute Men who read short, pro-war speeches provided by the government during the four-minute break between reel changes at movie theaters.

Women in the War

Because men needed to head to war to fight as soldiers, women moved into jobs that had been held exclusively by men. Women became dockworkers, bricklayers, railroad workers, and even mined coal and took part in shipbuilding. Women also contributed in great numbers to traditional positions such as nurses, teachers, and volunteers for organizations like the Red Cross. The work women did during WWI was extensive and varied, and it would not go unnoticed by President Woodrow Wilson. Wilson publicly acknowledged the hard work and service that women provided for the war effort. While this public acknowledgment didn't include any laws that helped equalize pay for equal work, it did help bolster public support for women's suffrage. This, in part, led Congress to pass the 19th Amendment in 1920, which granted women the right to vote.

The battle against a foreign threat, namely the Germans, created a strong anti-immigrant sentiment at home in the U.S. The main targets of this anti-immigrant attitude focused on Americans who had emigrated from Germany and Austria-Hungary. Many Americans with German-sounding names lost their jobs, and some even faced the threat of physical violence by others. Orchestras stopped playing German and Austrian composers, librarians banned German authors from their bookshelves, and Americans actually changed some vocabulary in an attempt to eradicate German influence. For example, German measles were now called liberty measles, and sauerkraut was renamed liberty cabbage.

As change spread throughout more of the country there was also social change happening in the lives of black Americans. Specifically, WWI accelerated the Great Migration. The Great Migration refers to the great numbers of black Americans who moved from the South to the North, the Midwest, and the West from roughly 1916 to 1970. During World War I, there were a lot of industrial job opportunities because of the men who went to fight in the war and because of the drop in immigration and anti-immigrant sentiment in the country. Southern blacks also saw the increased opportunity to leave their poverty-ridden and racially charged lives in the South for what they hoped would be safer and more prosperous lives elsewhere.

The right to feel safe as an American citizen also came under fire during WWI as Congress passed the Espionage Act in 1917 and the closely related Sedition Act in 1918. Under these acts, a person could face serious fines and a long prison sentence for anything that the government considered an interference with the war effort. This included saying anything bad about the government or the war effort. These laws, it would seem, clearly violated the intent of the First Amendment. However, they still affected many anti-war protesters and newspapers. One of the more famous prosecutions included sentencing famous socialist and labor leader Eugene V. Debs to ten years in prison for speaking out against the war and the draft.

While the Great War (World War I - considered to be the war to end all wars and threat to civilization itself) was being waged across Europe, major changes were also happening on the home front here in the U.S. The government used large-scale propaganda techniques to garner support for the war, including cartoons and posters, victory gardens, and the Four-Minute Men (government-recruited people who read short, pro-war speeches provided by the government during the four-minute break between reel changes at movie theaters). Women started working jobs traditionally held by men, which eventually helped the long-waged suffrage movement, which culminated with women's right to vote granted by the 19th Amendment in 1920.

Social change also came in the form of anti-immigrant feelings towards German and Austrian immigrants, which, strangely, afforded more job opportunities for black Americans and contributed to the Great Migration, which was the great numbers of black Americans who moved from the South to the North, the Midwest, and the West from roughly 1916 to 1970. Civil liberties were also challenged with the passage of the Espionage Act and Sedition Act, under which people could face serious fines and a long prison sentence for anything that the government considered an interference with the war effort.

Life in the United States During World War I

Inflation & Strikes After World War I

The Red Scare of the 1920s History & Overview | What was the First Red Scare?

Why Did the US Enter WWI? | American Involvement in WWI