'The American Scholar' is a speech that was delivered by Ralph Waldo Emerson to the Phi Beta Kappa Society at Cambridge. Learn about scholar's duties, influences on the human mind, and a brief summary/analysis of Emerson's transcendent address. Updated: 10/11/2021
Create an account

Go Your Own Way: A Brief Synopsis of Emerson's 'The American Scholar'

Have you ever wished that you could just do things how ever you wanted without having to worry about laws, rules, or other social pressures? Sounds pretty nice in theory, but whether we like it or not, there will always be external consequences for our actions. Nevertheless, renowned American thinker Ralph Waldo Emerson thought the rewards of going your own way far outweighed the risks - a notion central to his landmark speech, ' The American Scholar'.

In this oration delivered before the Phi Beta Kappa Society at Cambridge on August 31, 1837, Emerson stressed the idea that all individuals are really just parts of 'One Man,' similar to how individual limbs make up a single body. He considered the scholar as just one of these social 'limbs;' however, he also recognized that 'The state of society is one in which the members have suffered amputation from the trunk…'

Emerson thought the best way to reconnect all these body parts was to start understanding their crucial roles. Accordingly, he addressed his audience on the role he understood best: that of the American scholar. Of course, the function of a scholar is intellectual in nature, so Emerson had to begin his talk with an explanation of the various fundamental influences on the human mind. 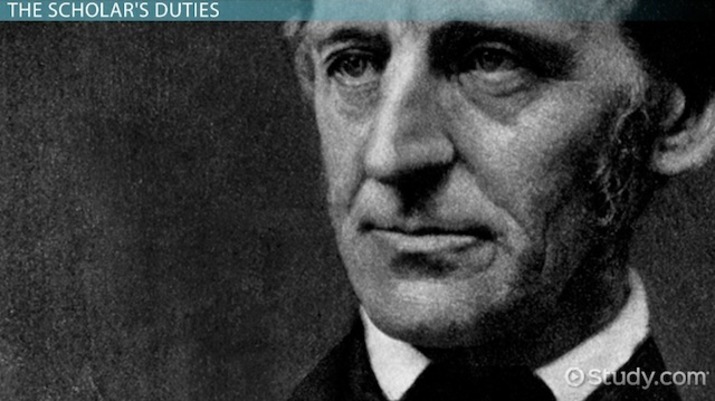 Coming up next: Inferring Mood in Drama

Influences on the Mind: Nature, Books, and Action

Emerson saw nature as the first and most important influence on human thought. He observed that we originally classify things in nature (i.e., biologically) as separate from one another. However, after dealing with these classifications for so long, Emerson found that our minds begin to see more and more common patterns between things we used to consider different, rendering any further classification unnecessary.

Emerson also found the past to be a tremendous influencer of thought or, more specifically, the books that bring the past to us. 'Books are the best of things, well used; abused, among the worst,' he claimed, urging that scholars should use books solely as inspiration and never as idols to be glorified and endlessly copied. He does make the distinction, though, that reading books on history and science is essential to scholarly endeavors.

The final influence on our intellectual faculties, action, is listed last for a reason, and that's because Emerson and others didn't find it nearly as important to thought. However, he did acknowledge that it is essential, focusing on the value of experiences in the life of a thinker. He even went so far as to say the greatest value of action to the mind is like that of books, and better, since actions are also a great source of inspiration and 'Thinking (itself) is a partial act.'

Emerson thought the office of the scholar is to cheer, to raise, and to guide men by showing them facts amidst appearances. However, he also thought the only way one could do this was by living a self-directed life. This requires an enormous amount of self-confidence, which Emerson warned the scholar would never have unless he began to think for himself.

For the remainder of his speech, the philosopher condemned contemporary American society as too greedy and too dependent on predominantly European thinkers to direct their own thoughts. Ultimately, Emerson believed the American scholar exists in the heart of every citizen, and that this self-possessed intellectual force could help the country transcend its shortcomings.

Where we might see a single farmer - unique and separate from everyone else - Emerson saw simply Man Farming. Similarly, when he looked at the role of the scholar, he found Man Thinking. This concept of the unity of all people and things in the universe is essential to understanding most of Emerson's work, particularly 'The American Scholar.'

Speeches like this one from Emerson made him the central figure in a particular artistic and philosophical movement of the mid-19th century. The movement stressed the concept of universal unity and the value of intuitive experiences over prescribed ones (i.e., rules and rituals). It was known as Transcendentalism. One of the main points behind 'The American Scholar' was for Emerson to help his audience, primarily scholars themselves, understand the scholar's role as part of the all-inclusive human body.

If other members of that body are the legs and stomach, Emerson saw scholars as the intellect. But, just like our individual bodies won't function when the brain is disconnected from the rest, so, too, humanity suffers severe dysfunction when its scholars are out of sync.

For Emerson, one of the most important things for scholars or any other member of the body to do, then, is to understand and appreciate what each part provides to the whole. And it's through this knowledge and appreciation that we truly begin to transcend ideas of separateness as nature intended.

Emerson and Slavery in America

One thing Emerson thought nature never intended, though, was for one part of the universe to be enslaved to another in any way. In the context of his speech and the pre-Civil War America Emerson delivered it to, this idea worked in two ways:

Emerson connected both states of servitude to the same problem - greed. This, he argued, was what drove American intellectuals to mimic popular foreign ideas and works, making their own more marketable, and why he thought 'our American colleges will recede in their public importance, whilst they grow richer every year.'

Of course, greed is also essential to owning slaves. Although he never directly addresses the notion of abolition in 'The American Scholar,' Emerson was a known condemner of slavery, and his language in this speech demonstrates that. One especially poignant observation that he made was that America was 'eat(ing) upon itself' in its state of confusion and greed leading up to the Civil War. Ultimately, he knew that greed would be not just America's undoing, but that of the whole human race if slaves and scholars alike remained caged.

In his speech, 'The American Scholar,' Emerson addresses the concern of intellectual integrity by outlining the influences on a scholar's mind nature, books, and actions, while also stressing the need for self-direction. This is one of the central pieces in American Transcendentalism, an artistic and philosophical movement of the mid-19th century stressing the concept of universal unity and the value of intuitive over prescribed experiences in which Emerson argues that Americans refuse to accept these ideas out of greed.

As soon as this lesson winds to a conclusion, find out if you can do the following:

The Philosophy of Composition by Edgar Allan Poe: Summary & Analysis

Edward Albee: The Zoo Story & Theatre of the Absurd