The Ancien Regime refers to 100 years leading to the French Revolution. Learn about the old order of political power, taxation, war, government mismanagement, and the perceived indifference of the monarchy to the plight of the poor, spelled the demise of the Ancien Regime. Updated: 10/01/2021
Create an account 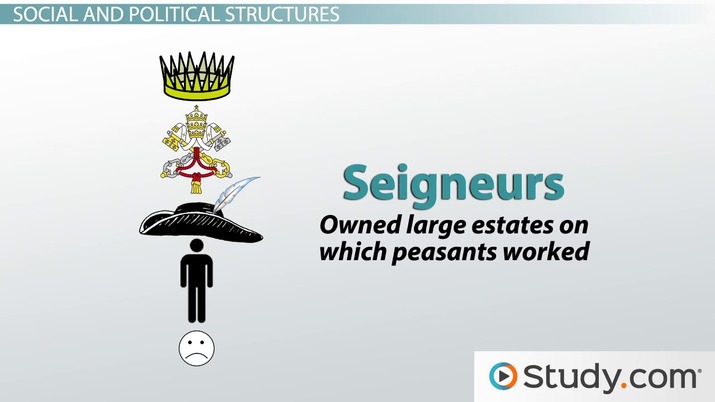 Try it now
Back
Coming up next: Marie Antoinette: History, Life & Fate

French society in the Ancien Regime was divided into a hierarchy, or ladder, of several distinct social classes. On the top rung, we find the king, who claimed to rule the country absolutely by divine right, or the will of God. All the people of France were his subjects, and he held the power of law in his person. At least, he thought he did. In actuality, the king relied quite a lot on the support of the nobility and France's governmental structures. On the eve of the Revolution, Louis XVI of the Bourbon dynasty was France's reigning monarch.

Next came the First Estate - the Catholic Church. France was a Catholic country to the core, and the Church was in charge of the nation's religious life as well as charitable works, education, and record keeping. The Church, which was exempt from taxation, was very wealthy, and some people within the Church became corrupt. The higher clergy, like bishops and archbishops, were often advisers to the king and held an abundance of political power. Lower clergy, like parish priests, were more involved in the lives of the common people, and they could better identify with the sufferings and struggles of the lower classes.

As we move down the ladder just a little bit, we find the Second Estate - the nobility. Nobles were people with hereditary titles like duke, count, viscount, baron, and chevalier. Some noble families came from a military background, stretching back to the days of the medieval knights. Others held top positions in government. Still others had once been commoners and purchased their titles with wealth they had earned through commerce. Most nobles were land owners with large estates, and many were very wealthy. They lived in luxury with the best of everything, from clothing to art to entertainment. As a whole, the nobility was a privileged class that exercised significant power, but avoided taxation.

On the bottom of the ladder, we find the Third Estate - the common people. While this class made up about 96% of the population, even it was divided. The bourgeoisie were the wealthier commoners, who were involved in business or other professions. They had some money and could sometimes purchase a noble rank or a lower-level governmental office. They often resented higher classes and especially the burdensome taxation that fell heavily on them.

At the very lowest rung were the peasants. These people worked the land of the nobles' estates or crowded into cities to scrape out a life as a laborer or a beggar. They had trouble earning enough money to buy even basic necessities like food and clothing, but they were heavily taxed.

These classes interacted with each other through France's various social and political structures. For example, some nobles and peasants participated in the seigneurial system. Noble seigneurs owned large estates on which peasants worked. Each peasant received the use of a section of land in return for rent and labor. On top of that, the seigneurs often taxed the peasants heavily, expecting them to pay for necessary services, like flour mills and communal bake ovens. The seigneurs also held courts to pass judgment on troublesome peasants.

On a larger scale, France was divided into 37 provinces, each with a local government that was in charge of enforcing laws, collecting taxes, and managing daily life. Most office holders in these local governments were nobles or wealthy bourgeois. Thirteen parlements also served France as supreme courts that registered and enacted royal decrees.

On the eve of the French Revolution, France was a mess. The Ancien Regime was falling apart from the inside out as years of governmental mismanagement, class resentments, war, debt, taxation, and bad harvests took their toll. In the century before 1789, France had been involved in wars with England, wars on the European continent, and wars in America. These conflicts racked up some major debt. By 1780, in fact, half of the nation's budget only just met the interest payments on its loans.

Taxation became heavier and heavier and heavier, especially on the Third Estate, most of whom could not afford to pay all the new taxes government officials thought up. There were taxes on each family, duties on various products, poll taxes, and special taxes to meet specific needs. The Third Estate bore the brunt of them while the First and Second Estates were mostly exempt. On top of everything, the church required a tithe, or 10% payment, from its members. Resentment among the lower classes grew quickly, especially when they saw the king, nobles, and some churchmen living in luxury.

Furthermore, bad harvests in 1769, 1776, 1783, and 1789 created food shortages and rapidly rising prices. Members of the Third Estate sometimes had to spend 80% of their income just on food. Riots and revolts began breaking out in protest as the majority of France's people struggled just to survive. By 1789, revolution was on its way, and the Ancien Regime was entering its final days.

The term 'Ancien Regime' describes the structure, politics, and powers of French society before the French Revolution. Society was split into a hierarchy of social classes, with the king at the top, followed by the First Estate of the Catholic Church, the Second Estate of the nobility, and the Third Estate of the common people, who were further split up into wealthier bourgeoisie and poor peasants.

These social classes interacted through France's social and political structures. The seigneurial system allowed land-owning nobles called seigneurs to control peasants who worked on their estates. On a larger scale, nobles and some bourgeoisie managed the local governments of the French provinces and held seats on the 13 parlements, or supreme courts.

The Directory of the French Revolution | Overview, Formation & Significance

The Directory of the French Revolution | Overview, Formation & Significance