The Philippines underwent changes in leadership and national attitude towards their surrounding countries and the United States. Learn about the benevolent assimilation involvement of the US and the rebellion of Filipino nationalists that promoted independence, but not until after 1946. Updated: 11/05/2021
Create an account

Imagine that after years of working for a really horrible boss at a restaurant - the kind who fires your friends and makes you a nervous wreck at work - that one day his boss shows up and very publicly fires him. You and your friends can't help but crack a grin as the disgraced boss packs his things and leaves, and you immediately hope for better working conditions from this new boss. After all, this new manager has a reputation of promoting current employees to run the restaurant. It was that feeling of happiness and hope that many Filipinos felt after 1898, when the Americans defeated the Spanish. The Spanish had been horrible, and now the Americans were around. Surely, things would get better.

That's what many Filipinos thought in the summer of 1898, following the June 12 declaration of independence by Filipino nationalist Emilio Aguinaldo. This, in turn, followed the American defeat of Spanish forces in the islands. However, it seems that the Americans had a slightly different idea in mind for the Philippines. Whereas Cuba was put on a sort of fast track to independence, the Filipinos received no straight answers from the American occupiers. 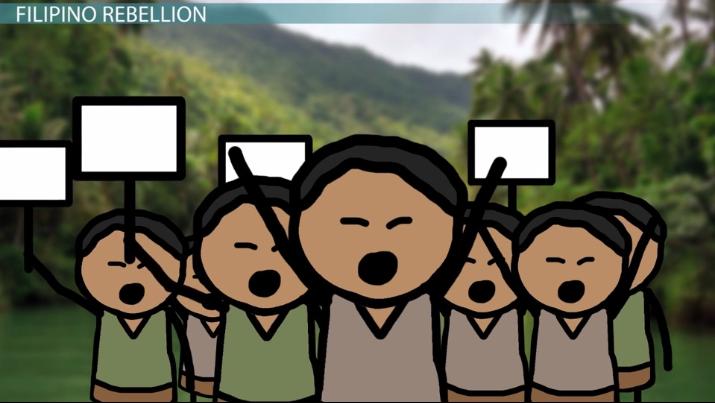 This was because the Americans had no such plans to grant the Philippines their independence. They had gone to war to free Cuba, and the Philippines were really just icing on the cake. Furthermore, they really didn't know who this Emilio Aguinaldo was or if he could be trusted. From their perspective, he seemed to be just another dictator, and if the United States was going to install a dictator in another country, it was going to be someone they trusted.

Instead, the United States sought a program of benevolent assimilation, agreeing to protect and administer the Philippines until they were capable of governing themselves. In other words, the Americans were going to stick around until they figured out how to get rid of Aguinaldo. However, plans of the American plot to remain in the Philippines, as well as some derogatory language, reached Aguinaldo, and needless to say, he wasn't happy.

By 1899, the situation was growing ever tenser by the day, and Filipino nationalists protested more and more for independence, all while the Americans kept trying to turn the Philippines into their own possession. Later in 1899, a full-fledged rebellion broke out, led by none other than Aguinaldo. This conflict is known as the 'Filipino-American War'. Eventually, superior American forces would regain much of the Philippines, and by 1902, a peace was negotiated.

However, the Filipinos were left with a relatively unsure vision of the future. The Americans promised to eventually permit self-governance, but at the same time, were clearly enjoying the advantages of having a major possession so close to China, India and Japan.

Indeed, in the war's aftermath, the Americans began to meddle more and more in the internal affairs of the islands. Whereas the power of the Catholic Church had never been disputed before, the Americans seized thousands of acres of land and gave it to poor farmers. This helped guarantee a significant amount of support for the American occupation from the masses, but it didn't exactly please the elite. In fact, English was soon introduced as the principal language of education and business, meaning that new elites could have the potential to surpass established families.

The Philippines had originally hoped to gain their independence soon after the end of the Spanish-American War, if not before. After all, Emilio Aguinaldo had declared the country independent only weeks after the American victory at Manila Bay. However, American hesitation to allow a relative unknown rule a country that Americans had played a role in liberating prevented Aguinaldo from really ruling.

A war was fought from 1899-1902 over the issue of Philippine independence, as the Americans preferred a program of benevolent assimilation. This assimilation limited the power of the Catholic Church while increasing the importance of the English language. However, Congress could not ignore the Filipino question, granting more self-governance in 1902, 1916 and 1934, before eventually granting full independence in 1946.

Use this lesson to strengthen your knowledge and your ability to:

The Annexation Debate & Rebellion of the Philippines
Related Study Materials