The Articles of Confederation was the new nation's founding document, but the government established under the Articles was too weak. The new central government had no way of raising revenue and no ability to enforce the commitments made by the states. The Northwest Ordinance paved the way for the growth of the new nation.
Create an account

The Articles of Confederation and the Northwest Ordinance

We declared Independence, so now what? The new nation is going to need some form of government. We're going to have to establish something, but what form should it take?

It is important to realize that the constitution was not the first founding document after independence. So, how were things set up at first? I usually liken the first national government to the European Union. Realistically, each individual state saw itself as its own country. Having just dealt with what they considered tyranny from an outside force, the founders were very afraid of a strong central government. They especially did not want taxes to be imposed from some central government. After all, No taxation without representation had been the rallying call for the revolution. 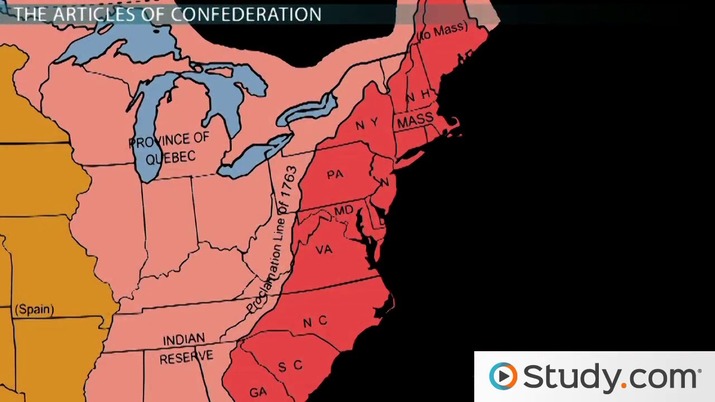 Coming up next: Weaknesses of the Articles of Confederation and Shays Rebellion

The Articles of Confederation

Under the Articles of Confederation, the congress was tasked with creating and maintaining an army, and they could request states to send soldiers, but they couldn't demand or enforce the request. Also, under the Articles of Confederation, the central government could print money, but they could not tax. The federal government could request that all of the states pay their fair share, but that is when like all of your friends go out for pizza - Pennsylvania's a super cool and super nice guy, but he always leaves his wallet at home!

The printing of money to pay for the war, but having no way to back the money led to horrible inflation. By the end of the war, everyone had fistfuls of worthless money! When the states were asked to raise taxes to back the currency, most just refused and just began printing their own money, which then also succumbed to the same inflation.

Under the Articles, it is easy to see how the primary power was left to the states. Each state had one vote in the unicameral legislature - unicameral meaning it only had one body or house. They needed 9 of 13 states to enact a law, and in order to amend the articles themselves, they needed unanimous agreements from the states. To go back to our friends' night out for pizza analogy, imagine getting 13 friends to be unanimous on even something as simple as what crust they want on their pizza!

Even with the modest powers granted to the government by the Articles of Confederation, it took until 1781 to ratify them. This was mostly due to Maryland and some territorial disputes. These disputes were ended when the central government ceded control over the western territories. That brings us to the Northwest Ordinance.

Congress had one success under the articles. In 1787, it passed the Northwest Ordinance to establish a process for admitting territories to the Union as states. Each territory was to be governed by Congress until it had 5,000 free, white males. Then settlers could vote whether to become a permanent state with all the rights of the other states in the Union.

The Northwest Ordinance also abolished slavery in the territories and granted freedom of religion and the right to trial by jury. The ordinance promised fair treatment to Native Americans. It did not, however, extend the same rights to them. The U.S. actually got a great deal of this land by fraud and violence against Native Americans.

So in recap, the Articles of Confederation formed too weak of a central government to survive. A firm league of friendship, more like the European Union than what we call the United States today, was formed. States retained their sovereignty and independence, and the states created their own money and rules for commerce. There was a unicameral representative congress, or just one lawmaking body. They had no power to tax. This is very important because under the Articles there was no way for the central government to bring in revenue, and there was no power to enforce military service.

The Articles of Confederation and the Northwest Ordinance
Related Study Materials

James Madison After the War of 1812: The Era of Good Feelings