Andrew has worked as an instructional designer and adjunct instructor. He has a doctorate in higher education and a master's degree in educational psychology.

The bell curve is the representation of normally distributed data in a graph. Discover the theory and themes behind the bell curve by looking at its definition and some examples of data. Updated: 09/13/2021
Create an account

How tall are you compared to the average person? How much does a dog weigh compared to others of its breed? What is your IQ compared to your friends? All these questions can be answered with the help of the handy-dandy bell curve. This lesson will introduce you to the bell curve and show you how, with the right information, you can figure out just how smart you are compared to the rest of the world.

Some things you look at and wonder how they came up with the name for it. Have no fear, the bell curve is not one of those things. Just look at it - it's a bell. While the nomenclature is simple, the idea of what makes a bell curve and how to use it are a little trickier.

The beauty of the bell curve, and why it is so important to understand, is that the information it displays has certain characteristics. As mentioned above, the average of the data is perfectly in the middle, but you can also see there are percentages given for each 'chunk' of data. Each one of these data chunks represents one standard deviation, but don't worry about that term for now. Just think of them as chunks of data. In a bell curve of normally distributed data, those percentages given will always be true. The middle chunk will always add up to 68.2%, the next chunk is 27.2%, the next is 4.2%, and the last little bit is 0.2%. Note that because of rounding, they don't add up to 100%.

Now, on to proving that you have a higher IQ than half the world! 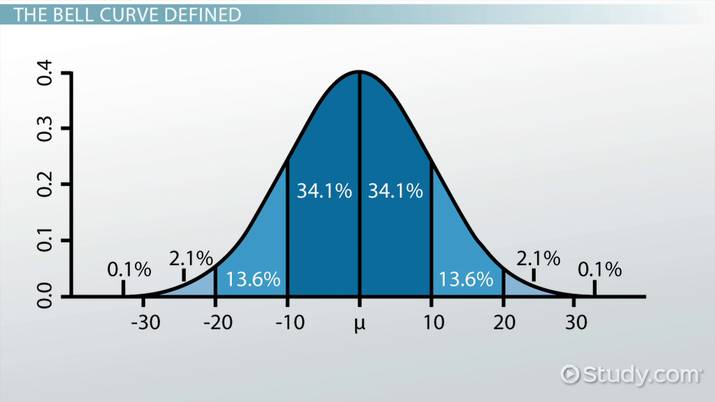 Try it now
Back
Coming up next: The Effects of Standardized Testing on Students

The bell curve is phenomenally useful when your data fits it. The beauty of this is the ability to make comparisons between two or more points on the curve. One of the best examples of this ability comes from the IQ test. The IQ (intelligence quotient) test is a metric designed to determine human intelligence. The beauty of the IQ test and the bell curve is that the data for the IQ test is intentionally made to be perfectly normal, which as you will remember, means it has a bell curve.

If you look at the graph of IQ data you will find that the exact center is 100. This means that if you scored 100 on the IQ test, exactly 50% of other testers scored higher and 50% scored lower. Next, look at the chunks of data on either side. Each chunk accounts for 15 points, one higher, and one lower. Testers who score in these two chunks of data can be thought of as average and, if you remember, they account for 68.2% of all test results. The next set of chunks are above- and below-average testers, who account for the next 27.2% of all testers, and so on.

Now, imagine you took the IQ test and scored 100. Want to cheer yourself up? Don't look at this as average, just add up all the percentages to the left of the 100 point and you'll find that you are smarter than 50% (with rounding) of all testers! Since this data is normal we can apply it to the entire planet's worth of humans. This means that, assuming there are 7 billion people on the planet, you are smarter than 3.5 billion people. Doesn't seem so average now, does it?

Let's try this again, but say that you're one smart cookie and you scored 130 on the IQ test. Not that you need the ego boost, but look at the percentages to the left of the 130 point and add them up. Assuming you're this smart, you should have gotten 97.2%. That means you're smarter than roughly 6.8 billion people. Not too shabby! Look out about bragging though, there's always a chance you'll run into one of the 196 million people smarter than you. They're 2.2% of the population, after all.

Let's try one more example - grading. Ever had a teacher who graded you on a curve? A bell curve is what they were talking about. Simply put, to grade on a curve you force the scores the students receive on their tests to fit into a normal distribution. A teacher will do this by making it so that the average test score becomes the peak of the curve. They then distribute the grades based on the percentages we see on the bell curve. This means that 68.2% of the class will receive Cs, 13.6% will receive Bs, and a scant 2.2% will get an A. The same is true the opposite direction, with 13.6% receiving Ds and 2.2% getting Fs.

Do you see now why many students shudder when they hear a test will be graded on a curve? If you take a test that is scored 0 to 100 and the average grade is 81 it should be a B, right? Nope, 81 is now a C and, depending on how the other students did, you could score a 90 and get a B or even a C! Don't worry, this is just one method of grading on a curve and there is quite a discussion in the education community about whether it is good practice or not. For now, you just need to worry about how it utilizes the bell curve.

Remember, normally distributed data will have an identical mean, median and mode and when graphed, it will have that tell-tale bell shape, which is perfectly symmetrical. If you have all of these characteristics, you've got yourself a bell curve! Now you can use those data 'chunks' to determine just how much of your data is above, below, or in-between any points on your graph. Good luck and don't fear the curve!

Bell Curve Overview & Purpose | How Does Grading on a Curve Work?

Z-Score Concept, Formula & Purpose | How to Find the Z-Score

History & Its Relationship to Other Academic Disciplines

Dispersion in Statistics Overview & Examples | What are Measures of Dispersion?

Range of Reaction Overview & Uses | What is Reaction Range in Psychology?

Bell Curve Overview & Purpose | How Does Grading on a Curve Work?

Z-Score Concept, Formula & Purpose | How to Find the Z-Score

History & Its Relationship to Other Academic Disciplines

Dispersion in Statistics Overview & Examples | What are Measures of Dispersion?

Range of Reaction Overview & Uses | What is Reaction Range in Psychology?