Lesson Transcript
Instructor: Ryan Hultzman
In this lesson, we will study the importance of cellulose in the biological world. Cellulose is an indispensable part of a plant cell wall and an excellent source of food and energy for microbes and fibers for us!
Create an account

Definition and Structure of Cellulose

Did you know there is something you eat every day that you can't even digest? It's true! Cellulose is one such food. Let's find out why and how cellulose becomes an essential constituent of our diet, even though we can't break it down in our digestive system.

Cellulose is a tough, water insoluble and fibrous polysaccharide ('poly-' means many and '-saccharide' means sugar). Cellulose is made up of thousands of glucose molecules attached together to form a chain. Think of a beaded necklace with each bead representing a glucose molecule. Several such chains lie side by side to form straight and stable fibers of great tensile strength.

The tensile strength of the cellulose makes it a very useful organic molecule. Cellulose is found in all plants and plant products. Each stem, leaf, root, flower, and fruit contains cellulose, and it is the most abundant organic compound in the world. Let's study some important biological functions of cellulose. 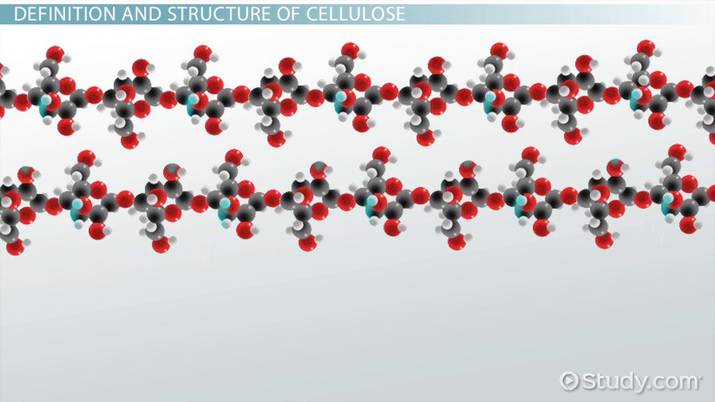 The Role of Cellulose in Plants

It is the structure of cellulose that makes it so useful. Cellulose is a structural polysaccharide and makes up about 30% of the plant cell wall, which serves many functions including:

Think of a cell as a balloon filled with water, the balloon has to withstand the pressure of water inside it. In plant cells, this pressure is known as turgor pressure. The tensile strength of the cellulose fibers in the cell wall provides it with the rigidity and strength needed to tolerate the turgor pressure. Thus, cellulose plays an important role in maintaining the shape of the plant cell and plant organs.

Cellulose is a source of energy for several types of microbes. Large amounts of cellulose is degraded to glucose by both bacterial and fungal microbes. The glucose derived from cellulose degradation is then used by other microbes as a carbon source to produce energy. Many fungi, specifically the members of Basidiomycetes perform critical ecological function by degrading cellulose present in decaying wood.

Some animals can digest cellulose. When an herbivore, say a cow, consumes a plant, like grass, bacteria in their intestinal tract are able to break down the cellulose into smaller parts that the cow's own digestive system can absorb.

Some bacteria can actually produce their own cellulose, making a kind of film. The acetic acid bacteria used in the production of wine and beers is one of these types. The synthesized cellulose forms a film around the bacterial cell and becomes a kind of matrix, called a pellicle, which helps the acetic acid bacteria to float on the surface and gain access to the oxygen that's needed for their survival.

Cellulose is a water insoluble dietary fiber that is found only in the food originated from plants, such as fruits, vegetables, grains, and nuts. It is absent in animal food products, like meat, milk, and eggs.

Cellulose is neither digested nor absorbed by our intestine. However, foods containing cellulose bind more water, making feces bulkier and softer for easier passage through our digestive system. Hence, intake of fibrous food is beneficial in the treatment and prevention of constipation and hemorrhoids.

Cellulose fibers do not add calories to our food, but still give a feeling of being 'full', which can help in weight loss. A high-fiber diet is also associated with reduced risk of developing type-two diabetes, obesity, and some types of cancer, like colon cancer.

Cellulose is a water insoluble polysaccharide made up of thousands of glucose molecules and has a great tensile strength. It is present in the cell wall of a plant cell. It helps the cell maintains the shape of a plant and tolerate turgor pressure, which is the pressure exerted from the fluid contained in the cell. Cellulose is a source of energy and carbon for a variety of bacteria and fungi. Some bacteria are capable of synthesizing their own cellulose. Fibrous foods containing cellulose are useful in the prevention of constipation, hemorrhoids, colon cancer, and obesity.

What is Ribose? - Structure, Overview