Bailey teaches High School English, has taught history, and has a master's degree in Anthropology/Historical Archaeology. 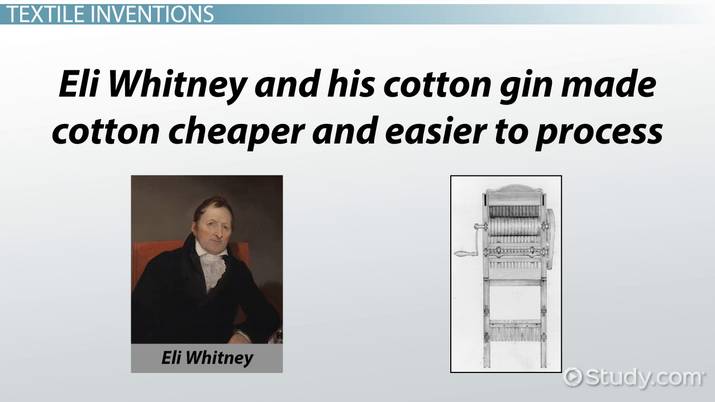 Coming up next: History of the Italian Textile Industry

The Industrial Revolution had a dark side, however: the result of people moving to urban areas to work in the factories. With so many people living in close quarters, cities became overcrowded and were often not clean or healthy. This led to a rise in disease. It also meant that people who worked in the factories were easy to replace. Factory work could be dangerous, especially for the many children employed by them. At the beginning of the Industrial Revolution, there were few, if any, rules that protected the workers. Authors like Charles Dickens and Elizabeth Gaskell wrote about the conditions faced by workers. Their books would help influence some important changes in factory conditions.

During the 18th century, Great Britain had become an impressive empire, and despite losing her mainland American colonies after the American Revolution, remained a world power. This enabled her to have access to raw materials from all over the world, including cotton. Historians have argued that the most important part of the Industrial Revolution in Great Britain was the textile industry.

For generations, people made cloth in their homes, but this gradually changed. With new innovations, cloth started to be made in factories and not by independent craftspeople. Meanwhile, Eli Whitney and his cotton gin made cotton cheaper and easier to process. Although wool was still made in the way it always had been, the British Empire had access to other materials, particularly cotton, and several inventions played a role in the increased use of cotton in Great Britain.

In 1746, Thomas Highs invented a machine called the spinning jenny, although others have given credit to James Hargreaves' invention in 1764. The spinning jenny had multiple spindles and could spin cotton more quickly. Other inventors would later add more spindles, one spinning at least 20 spindles at a time. Although the spinning jenny was unpopular because it could do the job of several people, it did speed up the production of cotton. Another important innovation was the water frame, invented by Richard Arkwright in 1764. Powered by a water wheel, this device stretched out the cotton before it was twisted - a process that gives the fibers strength.

The spinning mule was invented by Samuel Crompton in 1779. It was a combination of the spinning jenny and the water frame. Using a spinning mule, one person could use over one-thousand spindles at once, greatly increasing production and even improving the quality of the threads. The flying shuttle, invented by John Kay in 1733, helped weavers double their productivity.

In 1785, a minster named Edmund Cartwright had patented a power loom to make weaving easier and more effective. There were some bugs in his design, but others worked to improve it. The addition of a warp protector, a device that stopped a loom when something went wrong, led to the popularity of his loom in factories. Factories themselves changed, from harnessing the power of rivers to using coal for power. Some factories could turn cotton into cloth on site, while others only worked on a part of the process.

Great Britain was the place where these innovations, except the cotton gin, were created. Many historians give the textile industry credit for bringing about the Industrial Revolution in the first place, especially since many other inventions were created after the spinning jenny and the water frame. The production of cotton boomed, and for several years, Great Britain closely protected its new technologies. There were many laws that aimed to keep this technology in Great Britain alone. For example, it was illegal to take anything out of the country because it might allow someone else to replicate the machinery.

Immigrants to the United States who had worked in British mills tried to replicate the machines from memory, with little success. Finally, in 1810, Francis Lowell successfully replicated what he'd seen in the Manchester, England, mills, such as their power looms. This experience helped him build a successful cotton mill in the United States. The town of Lowell is named in his honor.

Although Great Britain did not actually grow any cotton, the British Empire was able to use the raw materials found in other countries, including its own colonies, to become the cotton cloth-producing nation in the world. With a wide range of new inventions that stretched from the availability of cotton to the steam engine, innovations to the British textile industry helped to propel Great Britain into the Industrial Revolution.

The Industrial Revolution began in England in the late 18th century. Key innovations to the British textile industry included the spinning jenny, water frame, flying shuttle, spinning mule, and power loom. Using raw materials from the Americas and other parts of the British Empire, Great Britain became the largest producer of cotton cloth in the world. The secrets of British factories were closely held ones for many years. Although the Industrial Revolution was a mostly positive event, there was a dark side to the mass production of products, including a lack of care for factory workers.

Inventions in the Textile Industry

Textile Mills in the 1800s Overview & History | Who Invented the Textile Mill?

Industrialization Spreads Around the World