Heritability describes how a phenotype is affected by genetic variation. Who you are is more than just your DNA - it's somewhat influenced by things, like what you eat and where you live. In this lesson, find out how geneticists account for variations using the broad-sense heritability equation.
Create an account

You've probably heard or said something like, 'I inherited my blue eyes from my mom' or 'Those big feet? Well, I got those from my dad.' Or, perhaps you've wondered while trying to shoot a basket, 'Why is everybody in my family six feet tall except me?' People talk about heritability, the ability for a trait to be inherited, all the time. People also think about why something wasn't inherited. In this lesson, we'll talk about how geneticists use heritability to help them understand how likely it is that a trait is 'passed on,' or really, how likely it is that it is expressed as a physical trait, or phenotype.

Heritability describes how a total phenotype is affected by genetic variation. Remember that a phenotype is the physical trait. Importantly, this genetic variation can be due to multiple genes and multiple alleles of these genes. In essence, we are talking about a phenotypic trait that is multifactorial. You may remember that multifactorial describes when multiple factors play a role in a trait. These factors can be both genetic and environmental. Therefore, whenever heritability of a trait isn't 100%, that's most likely because there are some environmental factors that come into play.

This is a good time to introduce the concept of penetrance, too. This is a term usually associated with a disease that is inherited. Penetrance is used to describe the percent of a population with a specific genotype that shows the expected phenotype. For example, 100% of individuals who inherit an allele for Huntington's disease will develop the disease phenotype. This is an example of complete penetrance.

In contrast, 80% of individuals who inherit the BRCA1 allele for breast cancer will develop this cancer phenotype. Why not 100%? Why is this genotype less penetrant, or incomplete? Science is working on answering that because the answers are likely to help us cure the disease. It helps to know that because this is a heritable disease, and likely a multifactorial disease, there's both genetic variation and environmental variation involved in the phenotype. 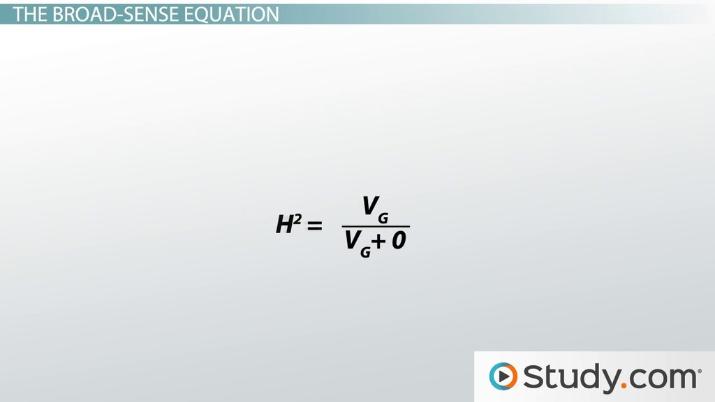 Coming up next: Using Twin Studies to Determine Heritability

Okay, so we've established that phenotypes can be influenced by your DNA and the world around you. How can we use this knowledge to figure out the heritability of a trait? Well, not surprisingly, a little (or in some cases, a lot of) math can help us get to that answer.

For the sake of this lesson, we won't get into too much of the math behind calculating V sub G, or V sub E or even H. Those numbers are calculated over long experimental observations. What we will do is talk about how this equation can be used, and what it means to genetics and what that means for your poor chance as a basketball star.

From looking at this formula, you can see that the range of heritability is from 0 to 1. For example, if V sub G (or the genotypic variation contributing to heritability) was 0, then there would be no heritability. This makes sense, as the genotype would have no influence and so the heritability would also be 0. You can't inherit something that does not have a genetic contribution.

For example, perhaps you were never fond of your vegetables and milk as a kid. I don't know. It's a possibility. Regardless, the heritability here would be somewhere between 0 and 1, as both genetics and the environment influence a trait like height. Further, we can simplify this equation because phenotype (P) is the result of both a genotype (G) and a phenotype (E), this equation can also be written as H^2 = V sub G / V sub P.

Heritability of a Trait

What you've probably realized from looking at this simplified equation is that knowing just any two variables will allow you to find the third. Let's use a small example to talk about how this heritability equation can be used on a dairy farm. Yes, a dairy farm. You like ice cream, right?

Well, a few (ice-cream loving) scientists calculated the heritability of a phenotype for dairy cattle: milk production. In 1970, the heritability for milk production in cows was at 25%. In our equation, we would convert 25% to a 0.25 to represent H. If we knew the genotypic variation, we could add in this value and then calculate the effect of the environment on this trait by solving for V sub E.

What could change to affect heritability? It's important to note that heritability is not a constant; it can change due to genetic variations such as new alleles, migration or inbreeding and selection. It can also change due to variation in the environment of the cows, things such as diet, the temperature of the barn and stress. So while we can't be sure exactly what happened to change the heritability, be it a change in cow rest and relaxation time or a change in genetics, we can be sure that a variation in one or more factors affected the heritability of this trait.

In this lesson, we discussed what it meant to have a heritable trait. Heritability describes how a total phenotype is affected by genetic variation. Phenotypes, or physical traits, can be multifactorial when multiple factors play a role in a trait. These factors can be genetic or environmental. This is related to penetrance, which is used to describe the percent of a population with a specific genotype that shows the expected phenotype. Penetrance usually refers to a disease, and it can be complete or incomplete. Incomplete penetrance is usually due to a phenotype being multifactorial, and this is reflected in the trait's heritability.

Once you have completed this lesson, the following goals might be realized: