There are several technical aspects to 'The Canterbury Tales' that may make it difficult to understand for modern readers. Explore this poem's meter through its rhyme scheme and application of iambic pentameter. Updated: 01/06/2022
Create an account

In addition to being an ambitious poem that includes stories from many different characters from many social classes, the technical aspect of The Canterbury Tales is worth noting as well. Meter in poetry refers to the rhythm, which is created by the patterns of stressed and unstressed syllables. The Canterbury Tales is written in Middle English, a form of English spoken from around the 12th to 15th centuries. This form of English, to modern readers, may seem like almost an entirely different language and even words that are recognizable may not be pronounced the way they are pronounced now.

Because pronunciation and the way syllables are accented in Middle English are so different from readers of Modern English, it can be difficult to determine how many syllables there are in a line and where the stressed and unstressed syllables are. 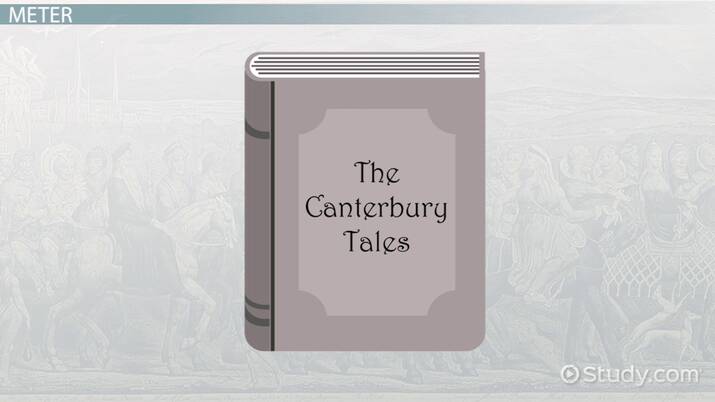 Coming up next: Alliteration in The Canterbury Tales: Examples & Meaning

This is the same meter in which Shakespeare wrote most of his plays and sonnets, but may be harder for a modern reader to distinguish in Chaucer's Middle English versus Shakespeare's more modern version of English. Iambic pentameter is a type of poetic meter that is fairly similar to the cadence of regular speech in English.

Here is an example of iambic pentameter from the General Prologue of The Canterbury Tales. The ''/'' divide up the iambs, which each contain an unstressed and stressed syllable, for a total of five iambs:

This line is not a perfect example of iambic pentameter, however, because there are actually 11 total syllables in the line. If you look at the last word in the line, ''roote,'' you might assume that this word is one syllable, but it would have been pronounced as two syllables in Middle English. This is a good example of how Middle English pronunciation might make it more difficult for modern readers.

The rhyme scheme of a poem is the pattern of how the last word in the lines rhymes with others. In The Canterbury Tales, every two lines rhyme with each other. This pattern can be demarcated with letters: AA BB CC DD, etc.

For example, Chaucer writes about The Squire:

''Singing he was, or fluting all the day;

He was as fresh as is the month of May.''

Because ''day'' and ''May'' rhyme, the two consecutive rhyming lines make up a rhyming couplet. Chaucer follows this pattern throughout the poem.

The experience of modern readers reading a poem in Middle English (12th to 15th century English) make it difficult to figure out the meter, which is the composition of stressed and unstressed syllables within lines of poetry that make up the rhythm. Geoffrey Chaucer wrote The Canterbury Tales in iambic pentameter, with five pairs of unstressed and stressed syllables. The rhyme scheme of a poem is the pattern of how the last word in the lines rhymes with others. The Canterbury Tales uses rhyming couplets, with every two lines rhyming with each other.

The Canterbury Tales: Poem or Prose?

The Prioress in The Canterbury Tales: Description & Character Analysis