Perhaps the most studied biogeochemical cycle is the carbon cycle, which, as you may have guessed, describes the pathways that carbon takes through living organisms and the environment. The carbon cycle is very different from either the nitrogen or phosphorus cycle. One reason is that the primary source of usable carbon for plants is carbon dioxide in the atmosphere, not the soil, which is where the main sources of phosphorus and nitrogen are for terrestrial plants. Because carbon dioxide is a gas that can move freely through the air and water, the carbon cycle is truly global.

As with the other biogeochemical cycles, consumers still get their carbon from eating other organisms, but again, there is a major difference between carbon and other essential elements. The difference is that carbon is used by living organisms as the primary means of energy storage, transfer and usage. Let's take a look at how using carbon as a means to store energy affects the carbon cycle. Plants take atmospheric carbon dioxide, which has very little potential energy, and convert it to high energy-containing carbohydrates. They do this through photosynthesis, which is the process by which autotrophs convert light energy into chemical energy. Energy can also be stored in the carbon bonds of lipids and proteins.

Of course, if carbohydrates and other organic molecules are used to store energy, there has to be a way for organisms to release that energy for cellular functions. This process in which oxygen is used to convert organic molecules to carbon dioxide and water and provide energy for the cell is called cellular respiration. Plants use cellular respiration to tap into their energy stores, and in this way, they do return a lot of the carbon back into the atmosphere as carbon dioxide. Plants are constantly using carbon to store energy by forming carbohydrates and then breaking them up and returning carbon dioxide to the atmosphere when they use the energy. This results in a much more rapid turnover rate for carbon compared to the turnover rate for nitrogen and phosphorus in plants.

Animals are completely reliant on cellular respiration to provide for all of their energy needs. They consume plants and other animals and then break down most of the organic molecules to produce energy through cellular respiration. So, most of the carbon consumed by animals is quickly returned to the atmosphere in the form of carbon dioxide, and a small percentage is incorporated into the biomass of the animal itself. Dead animal and plant matter is consumed by detritivores, which can also use cellular respiration as their main energy source and release carbon dioxide back into the air. 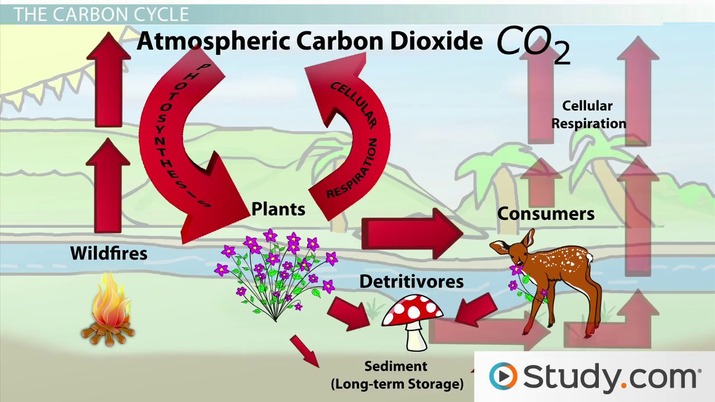 Try it now
Back
Coming up next: Biogeochemical Cycling and the Phosphorus Cycle

Photosynthesis and cellular respiration are both very fast processes that are almost evenly balanced on a global scale. I say 'almost' because the rate of photosynthesis exceeds the rate of cellular respiration. However, some of that difference is made up for by wildfires that burn plant matter and release carbon dioxide back into the atmosphere, much like cellular respiration does. Wildfires make up for most of that difference, but not quite. A very small amount of organic material is buried under sediment and taken out of the short-term carbon cycle that cycles carbon between living organisms, the atmosphere and the surface of the oceans. This buried organic material may eventually be turned into fossil fuels, but that's not the only way that carbon can be taken out of the short-term carbon cycle.

Believe it or not, on a net basis, coral reefs actually take the most carbon out of the short-term carbon cycle. This is achieved by the formation of calcium carbonate exoskeletons, which do not release carbon back into the water, but instead remain in a solid form and eventually form limestone. The largest pool of carbon in the world is actually in the sediments of the deep ocean which are estimated to contain about 50 times the carbon that is currently in the atmosphere. Most of this carbon is likely to stay out of circulation for millions of years. However, drilling for oil and natural gas in recent years has brought some carbon reserves out of long-term storage, and back into circulation.

Carbon is used by living organisms, not only as a structural component, but also as the primary means of energy storage, transfer and usage. Plants use carbon dioxide, which has very little potential energy, and convert it to high energy-containing carbohydrates during the process of photosynthesis, which is the process by which autotrophs convert light energy into chemical energy. To release that energy, plants and animals use a process called cellular respiration, which is the process in which oxygen is used to convert organic molecules to carbon dioxide and water and provide energy for the cell. Cellular respiration returns carbon dioxide back to the atmosphere. The end result is that most of the carbon dioxide fixed by autotrophs through photosynthesis is fairly quickly returned to the atmosphere as a result of cellular respiration.

However, not all of the carbon gets returned to the atmosphere right away, dead organic material that gets buried, and carbon that is incorporated into the exoskeletons of corals can be taken out of the short-term carbon cycle for millions of years. As a result of the long-term storage of carbon, the percentage of Earth's carbon that is being actively cycled between the atmosphere, living organisms and the oceans is very small.