The cell is a small, but complex structure. Take a look inside the outer plasma membrane of a cell and discover the functions of some common cellular components, including the nucleus, endoplasmic reticulum, Golgi apparatus and mitochondria, in this lesson.
Create an account

You have trillions of cells in your body, and each one is like a little town with its own power station, manufacturing plants and city hall. While no two cells are identical, we see many common elements found within all human cells. In this lesson, we'll take a trip through a typical body cell that we'll refer to as Cell Town. 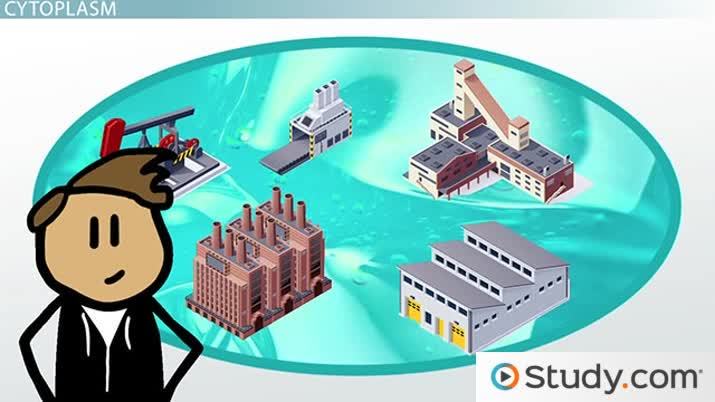 Coming up next: Anabolism and Catabolism: Definitions & Examples

The first thing you notice as you walk up to Cell Town is a barrier that surrounds the entire outside of the cell. This is known as the plasma membrane, or cell membrane, and you quickly notice that it's preventing you from freely walking into town. You're not alone in your desire to enter Cell Town, and as you look around, you see that some substances are given permission to enter through the plasma membrane while others are turned away. This is because a plasma membrane is selectively permeable. This selectivity is a type of protection and helps keep the harmful riffraff out.

To gain permission to enter the cell, you need to meet with the border patrol, which are protein molecules that are stationed along the fatty bilayers of the plasma membrane. You must look harmless because it's not long before you're escorted through the membrane with the help of these proteins, and you're told that you should visit city hall during your stay.

City hall is the nucleus of Cell Town. This means it's the control center of the cell that contains DNA. DNA is the abbreviation of deoxyribonucleic acid, which is the genetic material that contains the instructions for building the body. As you can imagine, this is a function worth protecting and why the plasma membrane is so selective in deciding who or what can come inside a cell.

You can see the nucleus positioned near the center of Cell Town, but in order to get there, you realize that you must wade through the cytoplasm, which is the gel-like substance inside the plasma membrane. This is where much of the cell's activity take place, and you notice it contains the metabolic machines or organs of the cell, called organelles. The term organelles means 'little organs,' which makes this term a bit easier to recall.

The first organelle that catches your eye is a funny-looking oblong structure that seems to be hard at work. This is the mitochondria, which is the cell's power plant because it's a place the cell produces energy, namely ATP, or adenosine triphosphate.

As you trudge through the cytoplasm toward the nucleus of town, you notice some more organelles that seem to be manufacturing products. The first structure you see is a tubular maze of membranes covered with tiny, dark bumps. This is the rough endoplasmic reticulum, or rough ER. The tiny, dark bumps that give the membrane its rough appearance are ribosomes. They have an important job because ribosomes are the sites where proteins are made.

You see that ribosomes and rough ER work nicely together. While ribosomes act as the protein factories, the rough ER is the protein packaging plant where proteins are readied for transport. These protein packages then head off to the Golgi apparatus, which is another structure that kind of looks like pita bread folded up on itself. This is a sorting and distribution center for proteins. The proteins that come into the Golgi apparatus get modified and then tagged for shipment to wherever they are needed.

There's another structure in this manufacturing part of Cell Town that is referred to as smooth endoplasmic reticulum, or smooth ER. It's smooth because it's not studded with ribosomes. Whereas rough ER is all about proteins, smooth ER has nothing to do with them. Instead, it makes lipids, which are fats. The smooth ER also acts as a detoxification center. Because of these functions, you might want to think of smooth ER as the slick emergency room where fat little baby lipids are born and drugs come to dry out or get detoxed.

It has been an interesting journey through Cell Town, but you're getting somewhat tired of trudging through the cytoplasm, so you decide to stop getting distracted and push on to the nucleus of town before it's time to head home, content with your new knowledge of the structures and functions of the human cell.

Let's review. Our imaginary Cell Town, like all cells in your body, has a plasma membrane, which is a barrier that surrounds the entire outside of the cell. This membrane is selectively permeable, which means it allows some substances in and denies access to other substances. This helps protect the nucleus, which is the control center of the cell that contains DNA, which is the genetic material of the cell. Cytoplasm is the gel-like substance inside the plasma membrane where we find the organelles. The first organelle we learned about was the mitochondria, which is the cell's power plant because it produces ATP.

We also walked through the manufacturing area of the cell where we saw the rough endoplasmic reticulum. This is a tubular maze of membranes covered with tiny, dark bumps. Those bumps are ribosomes, which are the protein factories. The proteins made in the ribosomes are packaged and readied for transport within the rough ER. These protein packages then head off to the Golgi apparatus, which is a sorting and distribution center for proteins. We also saw the smooth endoplasmic reticulum, or smooth ER, which makes lipids and acts as a detoxification center.

You could confirm your ability to name and describe the appearance and function of different parts of a cell when you reach the end of the video lesson.

Organelles: Internal Components of a Cell

What are Cells? - Overview

Parts of a Cell: Lesson for Kids