'The Censors' is a short story by Luisa Valenzuela, an author from Argentina. In 'The Censors,' Valenzuela uses humor to examine the serious events in Argentina during her life. This lesson will focus on the book and will analyze some of the literary elements present.
Create an account

Summary of 'The Censors'

Juan is a young man living in Argentina under the control of an authoritarian government (think Big Brother in Orwell's 1984). At the beginning of the story, he writes and mails a letter to a woman he loves named Mariana. However, he quickly begins worrying about what the censors will think about the contents of his letter.

All letters written and mailed in this society go through the Censor's Secret Command, a bureaucratic agency that inspects everything for bombs, poisonous powders, secret messages, and more. Anything and everything could be a potential signal to the Censors that the letter's sender or receiver is plotting against the government, and Juan is worried that something in his letter will implicate Mariana.

He comes up with a genius plan: he'll get a job with the Censors, work his way up the ladder, and intercept his own letter to send it through safely. He's hired easily, as there's a continuous need for new censors for reasons that we learn later in the story.

Juan quickly and easily works his way up the ranks at the Censor's Command. By the end of the first week, he's in the department that actually censors letters and is fully devoted to his work. Juan censors letter after letter, throwing away most of them that come across his desk.

One day, Juan's own letter lands on his desk. He's so focused on being the best censor possible that he mercilessly censors it and tosses it in the reject pile, which is a red flag to his superiors. Juan is executed the next day, 'another victim of his devotion to his work.' 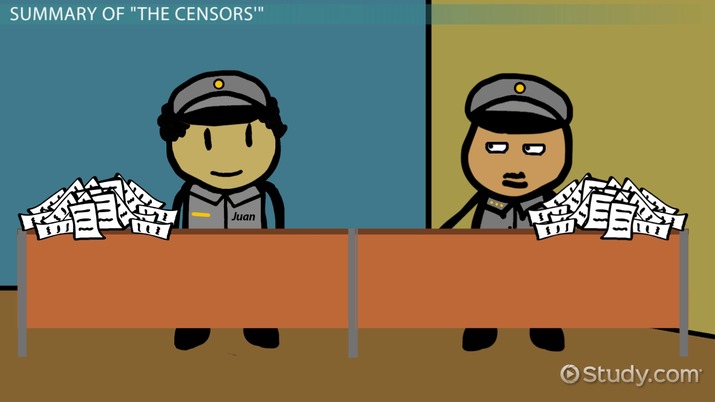 Coming up next: The Interlopers by Saki: Summary, Characters & Setting

The very broad theme of 'The Censors' is that government censorship and authoritarianism can cause profound psychological changes in an individual. In the story, government censorship gets in the way of Juan's love for Mariana - even before he becomes a censor he's overly careful about what he tells her in their letters. It also gets in the way of countless other people's innocent communications, as Juan censors innocent statements like 'the weather's unsettled,' believing that they could be secret codes used by rebels.

There's also a theme in the story of work taking the place of love and other things in life. Juan devotes himself entirely to his work in the censorship division, to the point where his mother worries about him. The theme of a character who's consumed by his work in a negative way is common in fiction, though it doesn't always go as far as a character literally causing his own death at his job.

The political situation in Valenzuela's home country of Argentina got nearly as bad as the depicted situation in 'The Censors' during her adulthood. After Juan Peron (the President of Argentina) died, the military took over in a coup. They formed an authoritarian regime and censored things they disagreed with - Valenzuela left to avoid the fate that befalls Juan in 'The Censors.' She didn't want to self-censor her work to please the regime, and she didn't want them to do it for her.

'The Censors' approaches the issue of government censorship through the lens of satire, a genre of literature that uses humor to poke fun at the absurd parts of serious issues. Valenzuela makes fun of the ridiculousness of government censorship, as Juan goes from knowing that his own letter is totally harmless to censoring statements about the weather. By exaggerating the mundane aspects of harmful or stupid policies or people, satire gets a laugh and makes a point.

Valenzuela also pokes fun at everyday people who sell out their fellow man. Juan is an unapologetic backstabber, selling out multiple coworkers on his way up the ladder. Juan is as much a target of Valenzuela's satire as the government regime is, and he basically gets what's coming to him.

Valenzuela's writing style is a big part of the satire at play in 'The Censors.' While a lot of satire - like that of Jonathan Swift, Mark Twain, or The Onion - is written with a sarcastic tone, 'The Censors' opts for an exaggerated, silly style. The style highlights the ridiculous nature of the story that Valenzuela is telling, and it also makes the satire a bit easier to identify and grasp.

Valenzuela uses an omniscient narrator, a narrator who knows and sees everything that goes on in the story. She knows the whole plot before it even starts. The first thing we hear in 'The Censors' is 'Poor Juan,' which heightens the satire. The narrator's omniscience, combined with the sillier tone, makes it feel less like just a silly story and more like we're being told a story by a narrator who's in on the joke. The punch line is pretty dark, but most effective satire deals with heavy subjects.

'The Censors' is the story of a young man named Juan who gets a job censoring letters for an authoritarian government. He's great at it - so great that he censors his own letter and gets himself executed. In this story, Valenzuela is using a ridiculous situation to satirize the very serious situation in her home country of Argentina in the late 1970s; she does so with a silly writing style and an omniscient narrator.

A Quilt of a Country: Summary, Analysis & Quotes

Figurative Language in King's I Have a Dream Speech

I Came; I Saw; I Conquered: Analysis of Julius Caesar's Quote